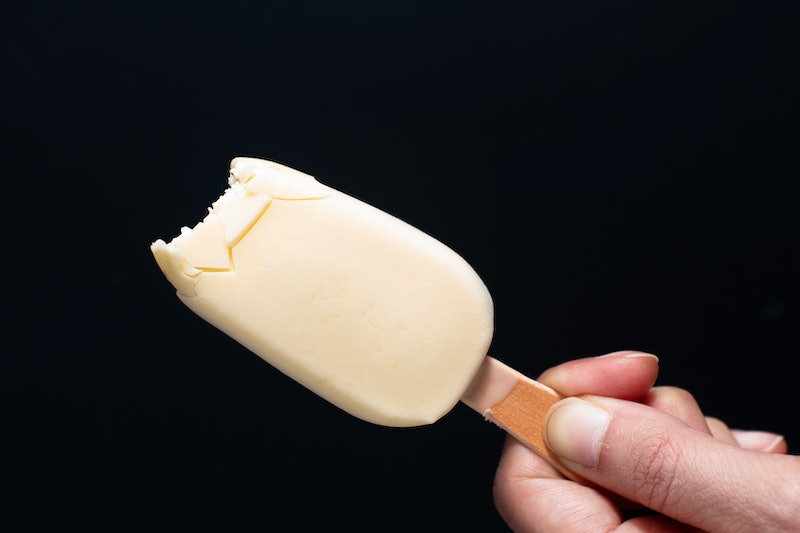 When you have a hangover — a really bad hangover — it can feel like nothing will make it go away, no matter how hard you try. You'd sell a kidney, you'd climb a mountain, you'd drink whatever horrible concoction your friend swears will work. And yet, you still end up feeling less than your best. But what if there was a hangover cure that was actually enjoyable? Well, I don't know how to say this with the gravity it deserves, but per Delish, an ice cream hangover cure is here. ICE CREAM. Ice cream that was designed to cure your hangover. It's like the heavens themselves have opened.

What could this amazing invention be? It's time to take a little mental journey to South Korea, which is apparently lightyears ahead of us in terms of hangover cures and deliciousness. In South Korea you can buy the Gyeondyo-bar, a grapefruit-flavored ice creamy treat that is meant to cure your hangovers. The title translates into "hang in there," according to Reuters, which is a pretty perfect name for a hangover cure if I've ever heard one. Apparently, you can just buy this mythical, heavenly Gyeondyo-bar at convenience stores in South Korea. You can just walk in and buy it, like it's no big deal — despite the fact that such a miraculous food invention has yet to find its way anywhere else in the world.

According to Reuters, the convenience store chain that sells these bars, Withme FS, says the product and the name “expresses the hardships of employees who have to suffer a working day after heavy drinking, as well as to provide comfort to those who have to come to work early after frequent nights of drinking". Which is a totally delightful and also a completely overwrought description of a hangover ice cream bar — and I'm here for it.

How does it work? Well, Reuters explains that it contains 0.7 percent oriental raisin tree fruit juice, which is a traditional hangover cure dating back to the 17th century. Not only that, a 2012 article in the Journal of Neuroscience found that it did reduce signs of intoxication — in rats, at least. Which, you know, sounds pretty much the same as humans. We both like cheese, after all.

Of course, there are lots of other hangover cures that you can reach to if you don't have any trips to South Korea planned. Some people swear by the salty power of pickle juice to cure a hangover while others reach for spicy food or a steam room. To be honest, throughout history people have done everything from wash their testicles in vinegar to eating swallow's beaks, so really nothing you try is going to be as out there as things that have been done before.

Is there one, full-proof method to cure a hangover out there? Not that I know of. But on the quest to find the ultimate hangover cure, trying an ice cream bar sounds like a pretty great pit stop.