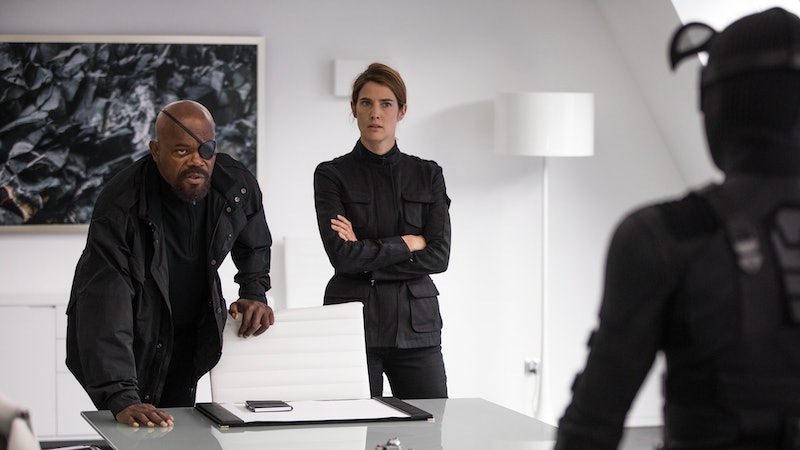 Spoilers ahead for Spider-Man: Far From Home. Ever since the Avengers films came to a conclusion with Endgame, fans everywhere have been wondering what Phase 4 of the Marvel Cinematic Universe has in store — and the Far From Home credits scenes might have some answers. According to ScreenRant, the post-credits sequence in Far From Home appears to be setting up an adaptation of "Secret Invasion," one of the biggest and most infamous crossover stories in the Marvel comics.

At the very end of the second solo Spider-Man installment, the Nick Fury that Peter Parker (Tom Holland) has been interacting with throughout the movie is revealed to be Talos (Ben Mendelsohn), the Skrull general who fans met in Captain Marvel. In the scene, Talos calls Fury, who appears to be hiding out on a Skrull space base, where he was relaxing on a fake beach and ignoring Talos' requests for help. In addition to explaining why Fury and Maria Hill (Cobie Smulders) were so easily hoodwinked by Mysterio (Jake Gyllenhaal) and his projections, the post-credits scene also seems to set up the possibility of a major Skrull invasion in Phase 4.

The Skrulls play a major role in the Secret Invasion comic book arc; in the storyline, the Avengers discover that the Skrulls have slowly infiltrated Earth and taken the place of government officials, influential figures and even a few superheroes. In the story — written by legendary author Brian Michael Bendis — the Skrulls are laying the groundwork for a major invasion of Earth, but the Avengers foil their plan before the alien race are able to properly take over.

While the Skrulls are often portrayed as scheming and nefarious in the Marvel comics, the events of Captain Marvel showed them to be a peaceful people simply looking to find a new home after being attacked by the Kree Army. Talos and his wife Soren (Sharon Blynn), have clearly maintained a close relationship with Fury — and also Carol Danvers (Brie Larson), based on the way he reacted to Peter bringing her up in conversation — which seems to imply that the Skrulls will play a significant role in further attempts to protect the Earth from intergalactic threats.

However, Talos and Soren's friendship with Fury doesn't mean that a "Secret Invasion" storyline isn't headed our way. In the comics, humans are aware of Skrulls and are very friendly with them, but it's all a part of their plan to infiltrate the planet without any interference. Clearly, just because Fury is aware of the Skrulls and working with them, that doesn't mean that a secret Skrull invasion might not still be in the works in Phase 4.

ScreenRant also noted that Talos-as-Fury mentioned that cells of Kree aliens are already inhabiting Earth, which could imply that another Kree-Skrull showdown could happen on our world in an upcoming film. At the end of Captain Marvel, the two alien nations were still in the middle of conflict, but Far From Home takes place in 2024, so there's no way of knowing whether or not the planets are still at war, of if the Skrulls have turned their attention to another threat.

If the conclusion of Phase 3 leaves fans with more questions than answers, well, that's likely Marvel's intention. Considering the studio is so secretive that even the actors aren't sure what's happening in the movies they're filming, it wouldn't be surprising if all of the hints dropped in the post-credits scene are a big mislead. Either way, fans will probably have to wait until at least 2020 to finally get some answers and find out if there really has been a Secret Invasion brewing all along.