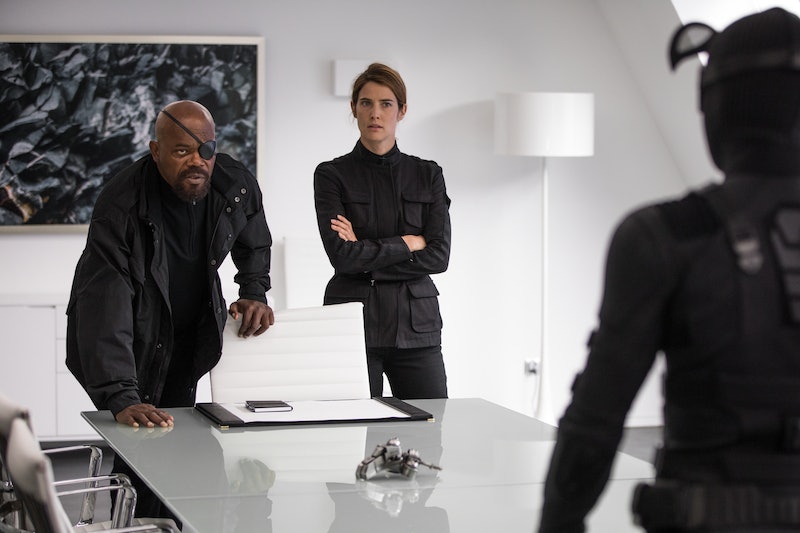 Spider-Man: Far From Home spoilers ahead. Nick Fury's role in Spider-Man: Far From Home is pretty typical... until the post-credits scene throws everything into question. In the second of the two bonus scenes, we find out that the Nick Fury we thought we were watching for the entire film was not Nick Fury at all, and that the real Nick Fury has another important mission going on that will continue long after Spider-Man and Mysterio's final battle.

In Far From Home, Fury (Samuel L. Jackson) shows up in the middle of Peter Parker's (Tom Holland) school trip to Venice to recruit him to help a superhero named Quentin Beck/Mysterio (Jake Gyllenhaal) from another reality battle forces called Elementals that are threatening the Earth. Fury is basically his normal Fury self, and so is fellow agent of S.H.I.E.L.D. Maria Hill (Cobie Smulders). They're both no-nonsense and just want to take care of business and get on with their jobs.

The twist, which leaves viewers wondering what the heck Fury is doing after Far From Home, comes in the second credits scene — the one at the very end after all of the credits have rolled. It's revealed that Fury and Maria Hill are actually shapeshifting Skrulls (the alien race that played a huge role in Captain Marvel) and have taken on the forms of Hill and Fury. But, this is all done with Fury's knowledge. (And probably Hill's, too.) While the two Skrulls — Talos (Ben Mendelsohn and Soren (Sharon Blynn) — discuss whether they need to let Spider-Man know it was them all along, Fury is shown relaxing on what at first appears to be a beach, but is soon revealed to be an illusion of a beach inside some sort of headquarters filled with other Skrulls.

If you haven't seen Captain Marvel, all of this would be very confusing, including the fact that these alien creatures are even called Skrulls. In the film, the Skrulls are enemies to S.H.I.E.L.D. at first, but then Talos and Fury reach a peace agreement when he and Carol Danvers find out what the real source of the conflict is. Talos is the leader of the remaining Skrulls after the Skrull-Kree War, in which the Skrull planet was destroyed. (Kree are another race of aliens, who Captain Marvel lived among after forgetting her origins on earth.) At the end of the film, Captain Marvel is meant to find a new planet for the refugee Skrulls to live.

The Skrull facility Fury is in at the end of Far From Home could be the new, safe place where the aliens are living. Fury's average guy beach clothes, bare feet — not to mention that he's relaxing at all, and with a coconut drink no less — don't seem very much like him, but I guess you have to stay down-to-earth somehow when you're in space.

It's pretty clear that Fury is still working with Captain Marvel — earlier in the movie he and Hill (well, Talos and Soren) even mention to Peter that she's busy — so, this scene could be a setup for a Captain Marvel sequel. But who knows, maybe it will have to do with something else entirely. The Skrulls appeared with the Fantastic Four in the comics, and now that the Fantastic Four are able to join the MCU thanks to Disney's acquisition of 20th Century Fox, the Skrulls and Nick Fury could pop up with them. The point is, we really don't know. Far From Home ends Phase 3 of the MCU and Phase 4 is being kept top secret. The next new movie is reportedly set to come out in May 2020, though, so it won't be too long until we start getting answers.