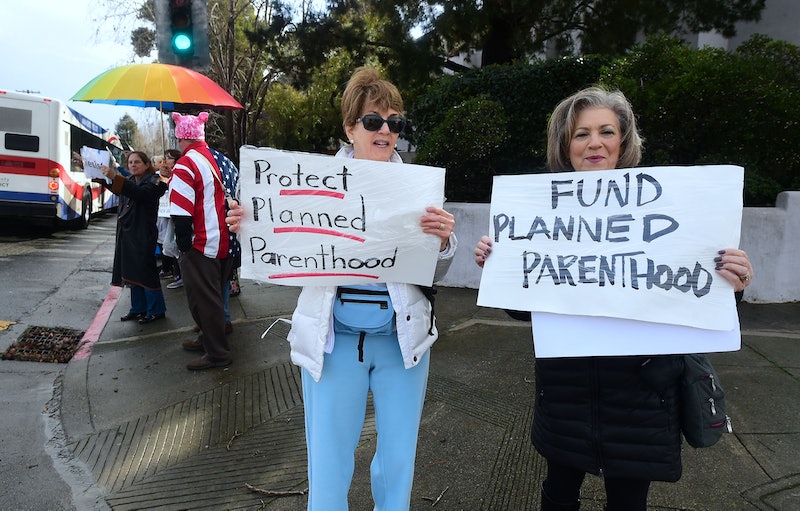 Researchers at Johns Hopkins University have found that the mortality rate due to cervical cancer is a lot higher than we previously thought: For black women, it's 77 percent higher, while for white women, it's 42 percent higher. Published on Jan. 23 in the journal Cancer, this study is sobering for a lot of reasons; for one, the fact that black women are disproportionately affected cannot be ignored. The study also illustrates how much we need Planned Parenthood — and what happens in the absence of preventative care.

Previously, the rate of cervical cancer mortality among black women over the age of 20 was thought to be 5.7 per 100,000 each year and 3.2 per 100,000 each year in white women. But as study leader Anne F. Rositch, PhD, MSPH, pointed out in a press release, "Since the goal of a screening program is to ultimately reduce mortality from cervical cancer, then you must have accurate estimates within the population targeted by those programs — adult women with a cervix."

Though one in five American women will have a hysterectomy in their lifetime, black women are more likely to have the procedure, and at younger ages, than white women, primarily because black women are at a higher risk for fibroids (benign tumors in the uterus that can require surgery). In excluding women who have had hysterectomies, which results in the removal of the cervix (thus rendering a person unable to develop cervical cancer), from the initial count, scientists were able to gain a more accurate perspective on who is actually developing, and dying, from cervical cancer.

The revised statistics are staggering: When the data was corrected for hysterectomy, the rate for black women jumps to 10.1 per 100,000 per year and to 4.7 per 100,000 year for white women.

Here's the reality about cervical cancer: it's preventable. We know what causes it: The human papillomavirus (HPV), the most common sexually transmitted disease in the United States. We know how to prevent it: the HPV vaccine, which is currently recommended for girls 11 to 12 years of age, and for boys as young as 9. We know how to treat it: Catch it early through routine screenings, and a combination of surgery and chemotherapy has proven effective. People should not still be dying from this — not at these rates. The issues are access to services, and whether people are willing to avail themselves to help.

With access to the HPV vaccination, annual screenings, and appropriate follow-up care, the 4,000 annual deaths could be avoided, as would the majority of 12,000 new cases each year. But with the impending defunding of programs like Planned Parenthood, which uses federal funds to provide these exact preventative services to almost 300,000 people each year, we risk an enormous rise in cervical cancer deaths — among other disastrous effects.

Yesterday, President Trump reinstated the Mexico City Policy, also commonly referred to as the Global Gag Rule, a Reagan-era funding ban for any international organizations that provide anything related to abortion — even just counseling — as part of their family planning services, even if funds from the United States are not used for this purpose.

As decades of research has shown, banning abortion (or, in the case of the Global Gag Rule banning talk of abortion) does not prevent abortion; in fact, it doesn't even affect the rates at which it happens. Nope, all banning abortion does is lead to a rise in unsafe and frequently fatal procedures. Oh, and one more thing: Abortions in the United States are not federally funded. They haven't been since 1976, thanks to the Hyde Amendment. The only exceptions are if the mother's life is at serious risk, or if the pregnancy was the result of rape or incest.

But despite all this, the fact that Planned Parenthood provides abortion services has landed it squarely in the crosshairs of Speaker of the House Paul Ryan and the Republican-controlled Congress; they're already trying to fast-track legislation to defund it, knowing both that the government funding that goes to Planned Parenthood is not used for abortions and that banning abortion does not prevent them from happening. It's like they're all just sitting there doing this:

Although Planned Parenthood doesn't have to justify its existence with all of the other services it offers — abortion is, after all, legal — cervical cancer screenings are one of the many absolutely necessary services it provides. If it is unable to provide them anymore, countless people will be left without the preventative care they need. It means that the rate of mortality due to cervical cancer will likely go up — and that, as this current study demonstrates, we might not even know when it happens.

We need Planned Parenthood. We have always needed it, and we will continue to need it. So protest the attempts to defund it. Volunteer and donate to it. Add it to your list of daily action items. Because allowing people to die when we could have prevented those deaths is among the many, many things we cannot allow to become normalized during Trump's presidency. People's lives literally depend on it.