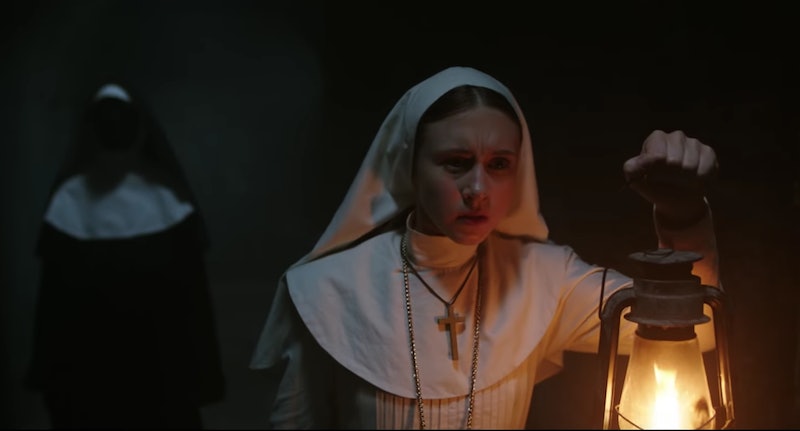 Horror movies have always been scary; it's in their job description and it's what keeps horror fans coming back for more. However, when you're not asking to be scared out of your mind, it can be a rude awakening if it just kind of shows up. This is the universal truth that resulted in the bizarre new reality in which this The Nun trailer was banned from YouTube.

Imagine going online to show your mom a cute cat video, or a new viral trend, or even just scrolling through your favorite actor's interviews for her new movie. And all of a sudden, you see a black screen, with the Mac volume sign pop up, turning itself way, way down. "Hey," you think to yourself, "That's weird." But before you can even finish that thought, a grotesque nun's face pops up, screaming bloody murder. Well, that's what a ton of people of YouTube viewers found around Aug 12, when The Nun began a new media campaign including short, terrifying ads to play before YouTube videos.

The new film, coming out Sept 7, started this new ad campaign at the beginning of the month, and not long after, Twitter users began spreading warnings of the ad so no other unsuspecting viewers fell for the ad, especially if they had anxiety or scared easily.

On top of the intense jumpscare, users also complained that the video didn't allow them to skip past the ad. Others reported a similar ad showing up on Twitter, although that one appears to be a GIF, not a video.

Watch the video below at your own discretion, and be warned the titular Nun pops up at 0:04 seconds in.

While it's understandable that so many people were angered by this type of add and the way it kind of weaseled its way into their YouTube routine, it is kind of an ingenious marketing strategy. And the fact that the Nun ad was pulled from YouTube for violating its "violent and shocking content" policy, according to The Verge, is only increasing the buzz around The Nun, and making horror movie fanatics want to see it faster.

The movie is a prequel in The Conjuring universe of films. The very first movie came out in 2013 and focused on paranormal investigators, Ed and Lorraine Warren, who did really exist in real life. The second one came out a few years later and is the basis for The Nun. Following in the footsteps of the first Conjuring, which prompted an entire new horror series of films starting with the prequel Annabelle, The Conjuring 2 will now have its very own spinoff prequel in The Nun.

Taissa Farmiga, who made a name for herself in American Horror Story, plays Sister Irene who is sent by the Vatican to Cârța Monastery, a monastery in Romania where a nun has just committed suicide. Things are not as they appear, and the death may not have been the nun's doing, but instead the work of Valak, the demon from The Conjuring 2. Since possession was what the demon did in the last movie, odds are, there's going to be a lot of that this time around as well.

So, fair warning to those who actually plan on seeing The Nun in theaters: there will be jumpscares, and you will be frightened.