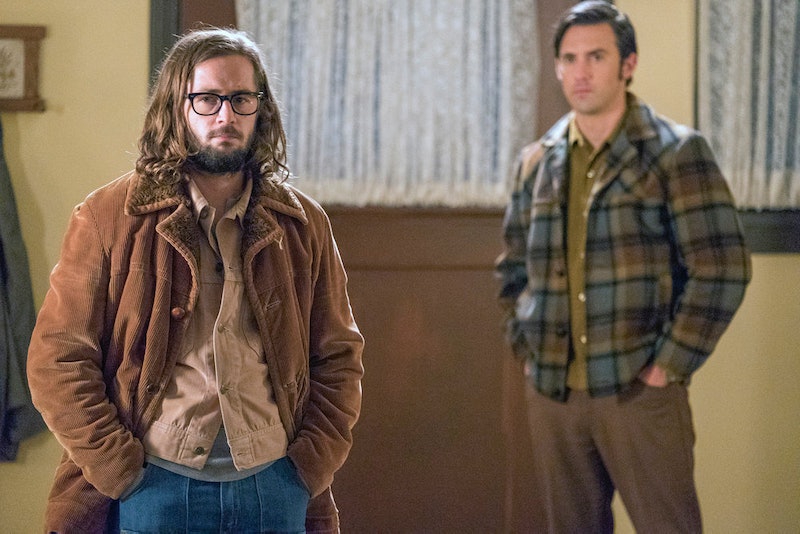 The shocking midseason finale of This Is Us revealed something major: Jack's brother Nicky is still alive. But while everyone caught up on the hows and the what nows of that reveal, fans might have missed something else pretty big. Old Nicky is played by a different actor on This Is Us. And since this show doesn't really do anything by accident, that could be significant.

But the adult characters have thus far always played themselves in time jumps forward. Mandy Moore played '70s, '80s, and '90s Rebecca and also plays grandmother Rebecca in 2018 thanks to the help of makeup and face prosthetics. Same goes for Jon Huertas' Miguel and even Milo Ventimiglia's Jack when he makes an appearance as an old man in a dream.

And, in a flash forward from 2018 to the distant future, Sterling K. Brown still plays Randall, just with some artful aging makeup and a grayer beard.

So why isn't Michael Angarano also playing old Nicky with some old-person makeup on? Instead, This Is Us cast Griffin Dunne, of Dallas Buyers Club fame, to play Old Nicky, according to Entertainment Weekly. One Redditor initially had the theory that perhaps Dunne was playing a relative of Nicky's (like a son) and not the actual Nicky and that's why a different actor was chosen. But Entertainment Weekly's report rules that out because it expressly mentioned that Dunne is playing Nicky Pearson, Jack's brother who didn't actually die in Vietnam.

Now, there is one other character whose future self is a different actor, but that's Tess and she had to be replaced by an adult actor because it's very hard to make a 13-year-old look fully grown, which is why the teenaged Big 3 are different actors, too.

Everything on this show is methodically thought out, which hints that this Nicky decision was a very purposeful casting choice. There's a reason Angarano couldn't play adult Nicky and it's probably not because he was busy with other projects, according to his IMDB.

The other indicator that not just putting makeup on Angarano was intentional is how creator Dan Fogelman reacted when EW asked him about it in an interview. "How does Michael look in the old-age makeup, if that’s the direction you are going?" EW asked. Fogelman responded with a cagey, "Can’t talk about it."

That whole interview was about the big ending twist, so there would be no reason why Fogelman couldn't have just said, oh, we actually cast a different actor to play Old Nicky. Perhaps he can't talk about it because it's significant to the rest of Old Nicky's storyline — which Fogelman said would be a huge part of the rest of Season 3. "[Nicky's story is] significant," he told EW. "It’s a big part of the front part of the back half of our season."

Fogelman added that the one question he wants fans to think about during this hiatus is, "What happened? From the point that we ended the entire episode on in present day to the point where we left Jack diving into the water: What the hell happened between then and now?"

But don't let trying to solve that big question distract from the smaller one: why is Old Nicky being played by a new actor? Hopefully both questions will be answered when This Is Us returns in January.