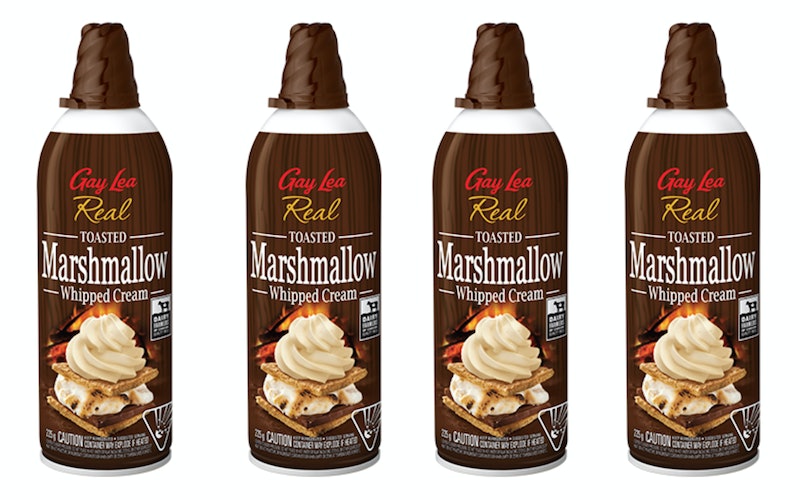 Whipped cream is a year-round essential. In the winter it caps hot chocolate, melting into the steaming cocoa liquid to achieve creamy perfection. In all the other months it finds a rightful place on pies, sundaes, and cakes. This summer the only whipped cream you need to outfit a tower of ice cream is Gay Lea's Toasted Marshmallow Whipped Cream. This unique flavor is summer captured in a canister. Imagine s'mores but whipped into a cream. If that's not what summer dreams are made of, I don't know what is.

Forget taking the time to gather the sticks, build a fire and roast marshmallows. Forget sticky fingers. Forget swatting mosquitos away when trying to enjoy the charred marshmallow smushed between chocolate and graham cracker. In the instance of Gay Lea's Toasted Marshmallow Whipped Cream, the best part of s'mores travels from canister to mouth for instantaneous summer sandwich satisfaction.

The flavor was introduced back in March by Gay Lea's Food Co-operation Ltd. It became available in grocery stores in April. It's recommended to add a dollop to "unique cocktails," iced drinks, desserts, and your morning waffles. However, this is where I must slightly disappoint you if you reside anywhere but Canada — the Toasted Marshmallow Whipped Cream flavor is only available north of the border. Meaning, you'll need a passport to obtain it. Honestly, it might be worth the trip.

The flavor is causing a ~stir~ on social media. One Twitter user wrote, "Tried it. Loved it !! Good on Apple crisp." Which is not only a review, but also a valued tip. The more items we know this Toasted Marshmallow Whipped Cream is good on, the better. If you're not located near Canada and aren't planning a visit anytime soon, you won't have to be jealous for too long. The flavor will only be available through summer 2019. Plus, American-based whipped cream connoisseurs can enjoy at least one Gay Lea whipped cream.

Gay Lea's Real Coconut Whipped Topping is available to US consumers — even those with lactose intolerance. This delicious whipped topping is dairy free, allowing everyone to enjoy the whipped cream party. Add a dollop to coconut milk pancakes or dairy free ice cream or simply swirl an entire canister on top of a coconut cream pie to maximize the coconut flavor. But if you're really hung up on the Toasted Marshmallow Whipped Cream thing and want to make the most of summer's s'mores season, rest assured that there are plenty of products to support your toasted marshmallow affection.

First of all, there are chocolate-stuffed marshmallows which will take your s'mores building game from 0-100, real quick. There are even s'mores caddies and a s'mores cage available to elevate the summer sandwich. If there's one thing the US takes seriously, it's making the most of toasted marshmallows. Even though the Toasted Marshmallow Whipped Cream isn't available, we do have Toasted Marshmallow Milano Cookies. Sure, they won't add a creamy texture to the top of your iced coffee, but you can dunk them into your coffee and crumble them on top of your ice cream sundae for a s'mores essence.