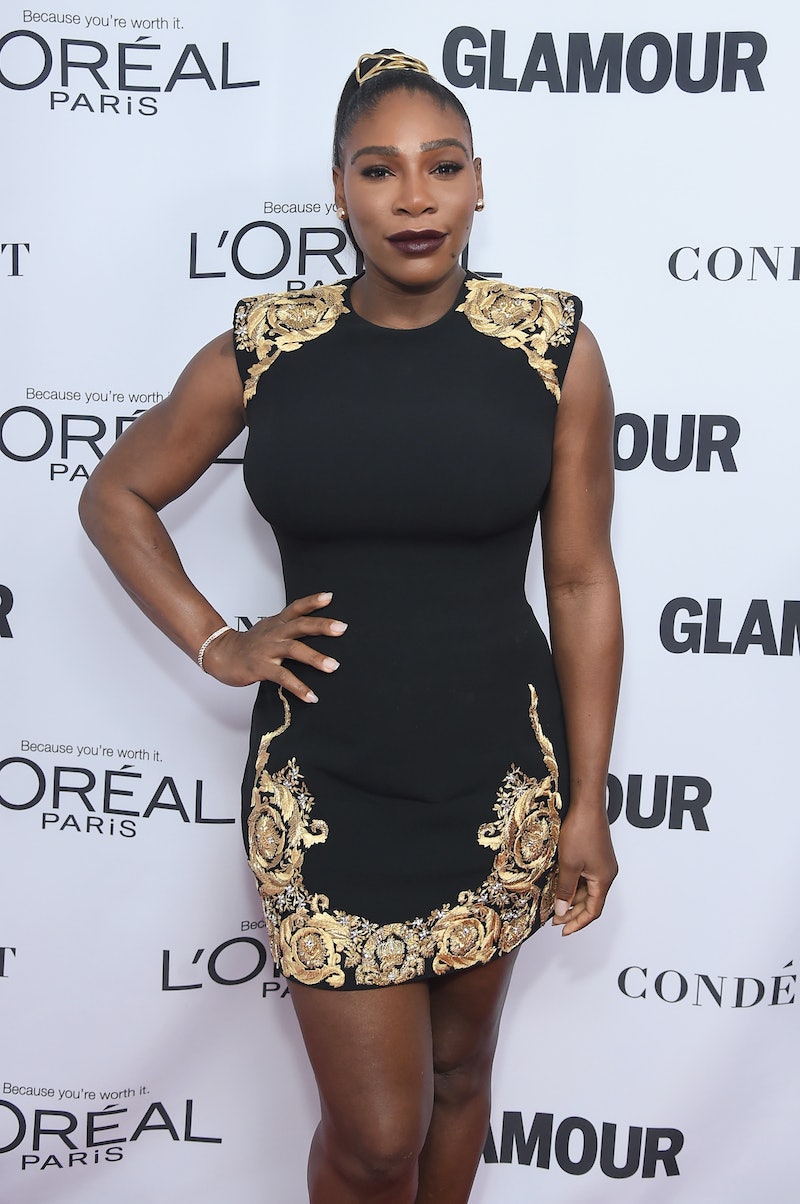 Less than 24 hours ago, Prince Harry and Meghan Markle said "I do" before a some 600-person crowd of friends and family, officially assuming their royal titles as Duke and Duchess of Sussex. A stacked roster of celebrities made the guest list, too, including Markle's pal Serena Williams, who chronicled her own royal wedding experience via Instagram throughout the weekend. And, judging by this video of Serena Williams rocking sneakers on her way to the royal wedding reception, it seems safe to say the tennis champion knows how to dress prepared for a long evening shindig.

After perusing the last couple of photos Williams shared to her Instagram account Saturday, May 19, fans of the famously down-to-earth athlete will probably be quite pleased — and, probably not at all surprised — to know she still prioritizes practicality over formality when it comes to her wardrobe choices. Even less surprising to Williams' fans should be the fact that, full-fledged formal attire or not, the star's royal wedding reception ensemble was stunning. (Who else will be taking a note from Williams' style book at their next black-tie outing?)

Per a short video clip posted to Williams' Instagram account early Sunday morning, the tennis star was dressed to the nines in preparation for the second leg of Saturday's royal wedding festivities. Following the morning's ceremony at St. George's Chapel, guests headed over to Frogmore House, a notoriously private venue within the grounds of Windsor Castle, for a smaller, "more intimate" wedding reception, according to a recent report by Vogue. (Well, "smaller" compared to the ceremony's audience, at least. According to Vogue, the reception capped its guest list at around 200 people.)

The video clip of Williams catches her en route to the reception, donning a floor-length Valentino gown with a vibrant floral-printed skirt and black velvet bodice (not to mention those Bulgari jewels around her neck) that had the star looking like royalty herself. As Williams approaches the camera, she offers one of her trademark chuckles, glancing down at her feet to reveal not a set of formal heels, but rather, a pair of sneakers. Williams paired the epic video clip with an equally epic caption (which she shared alongside a string of pre-reception snapshots on Twitter, too), and it's one that'll definitely resonate with any woman who's ever hobbled through a lengthy social event in heels. She wrote,

Williams added that the trendy sneakers are also Valentino. Per Williams' caption, the designer sneaks were sent to her "at the last min" by Pierpaolo Piccioli, Valentino's creative director. Finishing off the caption write-up, Williams recounted an earlier exchange with Piccioli, which, conceivably, prompted the last-minute sneaker send-off. And, as fans of Williams' refreshingly real social media presence would probably agree, she did so in perhaps the most Williams way ever. Explaining Piccioli's motive for sending over the tennis shoes, she wrote, "I told him, 'Be careful. I tend to be comfy for long nights.'"

Suffice to say, Williams looked truly luminous during Saturday's earlier royal wedding ceremony, too, wearing a knee-length Versace dress and pink heels to match. (For those who need evidence of Williams' unbelievable radiance, feel free to scroll through those Instagram gems, too.) Williams, who's set to play in the French Open in a couple of weeks, attended Saturday's big event alongside her husband, Alexis Ohanian, who made a few cameos in his wife's social media posts throughout the day.

For those royal enthusiasts wondering how Williams managed to snag a coveted invite to both the royal wedding ceremony and the reception, it probably has to do with her and Markle's adorable longstanding friendship. According to E! News, Williams met Markle in 2014, during a round of star-studded flag football at DIRECTV's Celebrity Beach Bowl, a promotional event for that year's Super Bowl game. Judging by Markle's initial comments on meeting the tennis champ — which she apparently shared via her now-defunct lifestyle blog, The Tig, according to several news outlets — the two seemed to really click.

"We hit it off immediately," Markle wrote, chronicling their first encounter in a blog post accompanied by a Q&A with the superstar athlete, according to E! News. Continuing, Markle revealed sweetly that the pals first bonded while "taking pictures, laughing through the flag football game we were both playing in, and chatting not about tennis or acting, but about all the good old fashioned girly stuff." Concluding her adorable BFF introduction, Markle supposedly finished off the story with, "So began our friendship."

If Saturday's wave of royal wedding-themed photos featuring Williams are any indication, it looks like the duo's friendship is still going strong. After all, you'd probably have to be pretty close to the bride to wear sneakers on her wedding day. But judging by Markle's penchant for pragmatism herself, if she saw Williams' wardrobe choice, then it seems pretty safe to say the newest royal probably loved it as much as we do.