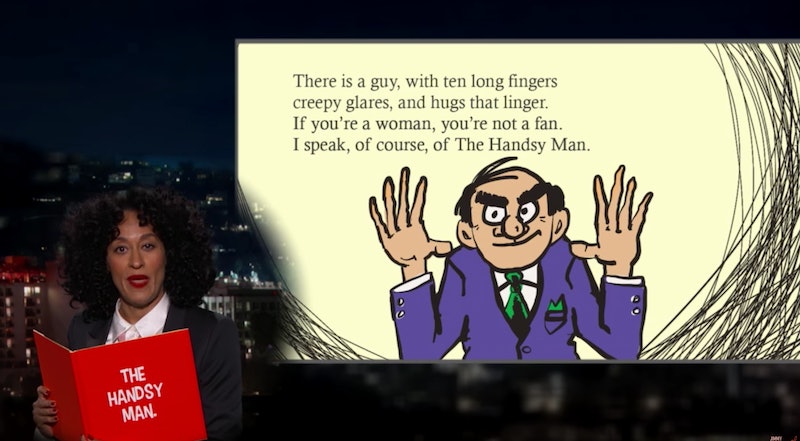 While guest-hosting Jimmy Kimmel Live!, Tracee Ellis Ross explained sexual harassment to the dudes who still don't get it in a novel new way. Quite literally: with a children's book (yes, complete with pictures) to break this thing down once and for all. According to Refinery 29, Ross took over hosting from Kimmel since he needed to stay at home with his son following his child's heart surgery. This proved the perfect opportunity for the actor and comedian to explain one of the topics that had dominated the news cycle this year.

Ross seemed surprised at the surprise with which many men responded to the revelations from "countless brave women" that they'd suffered from sexual harassment — after all, she argued, "treating another human being with respect isn't complicated." Thus, Ross was inspired to write The Handsy Man, a book which breaks down harassment into simple language and colorful pictures and which, best of all, mimics the sort of catchy rhymes you'd find in a Dr. Seuss tome. Thus, audiences everywhere learned "And if I am your employee/don't rest your hand upon my knee." In one of the most comedic parts of the book, the protagonist calls out for help from Chris Hansen, who catches internet sex predators in the segment To Catch a Predator on Dateline NBC — truly, this book was the gift that kept on giving.

So why do we need The Handsy Man? Mostly because as Ross has already claimed, men don't seem to get it. An essay in the New Statesman penned by a man asked of his experiences with women "Was it consensual? Was I sure? Really 100 percent sure?" while the Daily Mail's article "Is hugging still okay?" included interviews with men like sales associate Steve Wyard who asked "Have we gotten to the point now where men can't say, 'That's a nice dress' or 'Did you do something with your hair?'"

Similarly, after That '70s Show actor Danny Masterson was accused of rape and dropped from the fourth season of The Ranch following allegations, Masterson responded "In this country, you are presumed innocent until proven guilty. However, in the current climate, it seems as if you are presumed guilty the moment you are accused." He seemed completely oblivious to why being under investigation by the Los Angeles Police Department for allegations of three different cases of sexual assault would be a serious enough charge to cost him his job.

But after so many revelations of sexual harassment have dropped over the past few months, such responses seem increasingly weak. After The New York Times published their expose of Harvey Weinstein on October 5, a story which included decades of allegations against the film mogul, he responded in person in the same paper. Weinstein released a statement in response to the allegations to The New York Times, in which he said “I appreciate the way I’ve behaved with colleagues in the past has caused a lot of pain and I sincerely apologize for it. Though I’m trying to do better I know I have a long way to go."

Almost countless sexual harassment allegations would follow over the next few months, issuing from various fields of work. But as Ross explains, it isn't that complicated. It’s about treating female coworkers with every bit as much respect as their male counterparts. If you wouldn’t show the guy in the cubicle next to yours your private parts, why would you do it to a woman?

And as The Handsy Man helpfully spells out, this isn’t location specific — this advice about boundaries applies to absolutely every arena in which you might interact with a coworker “You’re not allowed to touch my can. Not on a plane. Not on a train. Not on your boat.” Sure, as the book also acknowledges, “I shouldn’t have to say this crap.” Yet as the sexual harassment revelations this year have suggested, we do have to say this crap.

So the next time a man asks you for advice about boundaries and consent or confides he’s unsure about workplace etiquette, you know what to forward him. The Handsy Man is the one book that even the most confused of dudes can’t fail to understand.