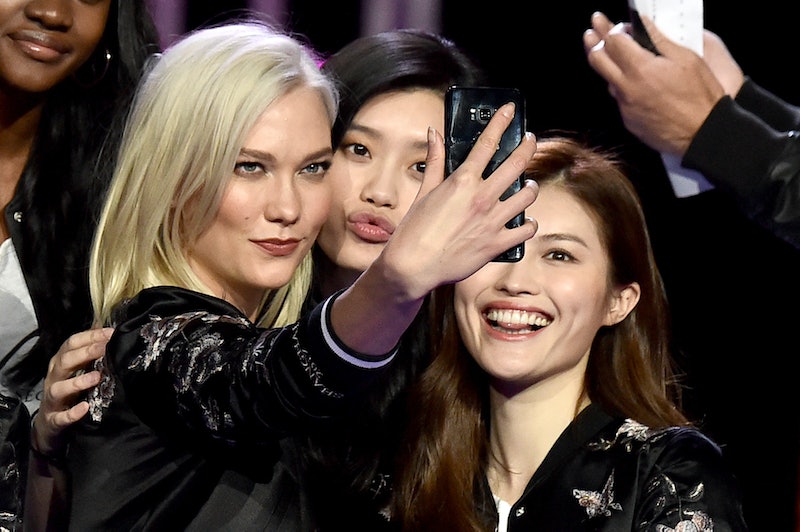 The 2017 Victoria's Secret Fashion Show is officially over, but the Angels aren't out of the news just yet. And this time, they are under some serious fire. Karlie Kloss posted a behind-the-scenes video on Nov. 28 that showed Victoria's Secret Fashion Show models using the n-word while singing Cardi B's "Bodak Yellow." Perhaps unsurprisingly, many people aren't happy.

Bustle has reached out to Victoria's Secret and Karlie Kloss for comment on the video.

The 2017 Victoria's Secret Fashion Show seemed to go off without a hitch — with the exception of GiGi Hadid and Katy Perry being banned from China for alleged racist incidents. That is, until Kloss uploaded her behind-the-scenes video showing the models singing along to the hit song.

Kloss' video shows models getting ready in the iconic pink VS robes while singing "Bodak Yellow" by Cardi B. You can clearly hear some of the models, most who appear white, using the n-word during a portion of the song. As of press time, neither Kloss nor Victoria's Secret have made a public statement on the video.

But the problem is not that Kloss posted a video of the moment. It's that the n-word was sung by a room filled with mostly white models.

Kloss wasn't the only one filming in the room. The video shows at least three other models taking videos and on their phones. Just like in previous years, the models are encouraged to post pictures and video of themselves getting ready to promote the show. Up until this year, there has never been a problem with derogatory terms being made public.

The video went viral after Twitter user PopCrave posted the snippet of Kloss' video. It didn't take fans long to notice that models were singing Grammy-nominated rapper Cardi B's song — and recognize the part of the song being sung. Fans took to Twitter to show their disappointment with the group of models. In fact, some people are even calling on Victoria's Secret to reprimand the models for singing the n-word.

From the video, it's unclear exactly which models said the word and which didn't. But one thing is for sure — you can hear the word loud and clear in the room filled of predominantly white models.

Fans know exactly what they said, and it's not OK.

If you can't tell by the long pauses after the word that it's actually not OK at all.

In the video, you can see one model pause her singing during the verse that should be off-limits to white listeners given history.

People are not happy. They're so unhappy that they want the models to be fired.

It all changes with the slip of a slur.

Way too loud and way too clear, my friends.

While there's nothing the offending Angels can say to undo their actions, it's important that the white women in the room who did say the n-word are held accountable for their actions.

More like this
Kate Had A Solution When Tom Cruise Broke This Royal Rule At The 'Top Gun' Premiere
By Frances Stewart
Doja Cat Wore Surrealist-Inspired Schiaparelli To The BBMAs
By Dominique Norman
All Of Kourtney Kardashian’s Wedding Dresses
By Allie Fasanella
10 All-Denim Outfits Inspired By Billie Eilish, Bella Hadid, & More
By Allie Fasanella
Get Even More From Bustle — Sign Up For The Newsletter