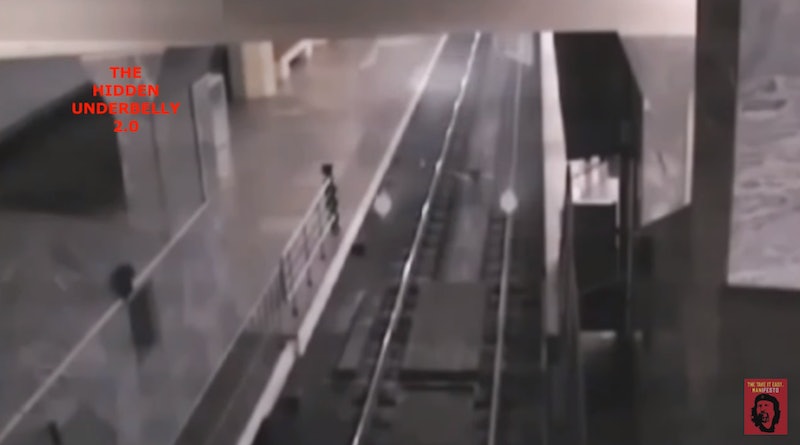 And now, your daily dose of spookiness: An alleged video of a ghost train in China has been rocketing around the internet this week, leaving loads of freaked-out people in its wake. Reportedly captured by CCTV at the Baotou Railway Station in Inner Mongolia, China, it purports to show a spectral locomotive arriving, stopping, and then departing on March 10 — but I have bad news for anyone who desperately wants to believe: It’s probably a hoax.

Let’s take a look at the whole thing, shall we?

The video was upload to the YouTube channel The Hidden Underbelly 2.0 on March 14, with the video’s description noting that the footage had been sent directly to the channel from an unnamed source. “This footage was capture on March 10, 2018 and when the station's security where [sic] watching the surveillance cameras they noticed this ‘Ghost Train’ pull into the station and stop as if it was picking up passengers and then leaving,” reads the description. “My source said that in the 12 years he has worked there he has never seen anything like this before and hopes he never does again.”

It’s not a long video; it clocks in at just under two minutes, with the footage actually repeating twice within those two minutes. Want to see it? Here — watch it for yourself:

Ghost trains are a fixture of folklore and urban legends in virtually every country that has railway services. In the UK, there’s the unfinished Highgate High Level station of the London Underground; despite the fact that it was never completed, it’s said that sometimes, you can hear the sounds of old steam engines chugging along. In the United States, there’s Abraham Lincoln’s funeral train — a specter of the train that transported Lincoln’s body from Washington, D.C. to Springfield, Ill. following his assassination. In Japan, there’s Kisaragi Station, a train station that doesn’t exist which can only be reached by boarding a train that doesn’t exist. In Sweden, there’s the Silverpilen, or Silver Arrow — an actual train whose unusual appearance lead to the rise of a variety of urban legends about it. And, of course, there’s that old, old urban legend — you know the one. It exists in many forms, but it’s probably best known as the “Express Train to Hell.”

These days, with the advent of CCTV and security cameras, it’s not uncommon for a video to pop up every now and again purporting to actually capture a ghost train in action — which, of course, is exactly what’s going on with this current viral story. But is it really video evidence of a ghost train’s existence? Probably not.

UK outlet Express had Scott Brando, who runs the website UFO of Interest, take a look at the video — and Brando’s determination was that the footage was likely a hoax. Brando said he suspect the whole thing have been spliced together from two separate videos — one with the train present, and one without it — which, honestly, is super interesting me. Why? Because that means that it’s basically the video equivalent of a double exposure — a technique which has been used to fake ghost photography since the mid-19th century.

Indeed, what we consider to be the very first ghost photograph utilized this technique: In the 1861, American photographer William Mumler accidentally took a self-portrait at a friend’s studio using a plate that had already been exposed once, which resulted in the appearance of a ghost-like figure in his finished photograph. He spent the next decade hoodwinking people — many of whom were grieving the loss of beloved friends or family members — with his manufactured “spirit photographs”; in 1869, however, he was put on trial for fraud. But at the time, the prosecution couldn’t prove how he’d actually perpetrated the fraud, leading to his exoneration.

These days, the same kind of effect can be created using image manipulation and video editing software — which it likely what went into the Inner Mongolia ghost train video.

But the plot thickens: Brando also told Express that he’d seen the same video circulate several years earlier — only then, it had allegedly been filmed at the Polezhaevskaya metro station outside of Moscow in Russia.

And hey, guess what? I found the video. It was uploaded to YouTube on April 7, 2013 by user Barugan7. And Brando is right — it’s the exact same footage.

You’ll notice that the quality of the video is much better here than it is in the version that’s making the rounds right now; the overall color is also a little different, and you can actually see people moving around in the station on the right-hand side of the frame.

All of this, I think, points to the video having been duplicated and edited: The lower quality is likely a result of what’s called “generation loss” — the degradation in quality digital images and videos undergo when they’re copied and re-posted over and over again; the difference in color might either also been an offshoot of generation loss, or else the result of deliberate editing; and — perhaps most interestingly — the fact that there are no other people visible in the video is because the whole thing has been cropped.

Here’s a screenshot from the Russia video:

Look at the right-hand side, where I've drawn a red rectangle to point out what I'm talking about here. See that gap behind the pillar? You can see a staircase and the other side of the platform there—and people are very clearly present.

Now, here’s a screenshot from the “China” video, again with a red rectangle drawn by me to point out the area of interest:

The right-hand side stops at the pillar — the rest of the frame has been chopped off.

At least it still makes for an entertaining story, right?