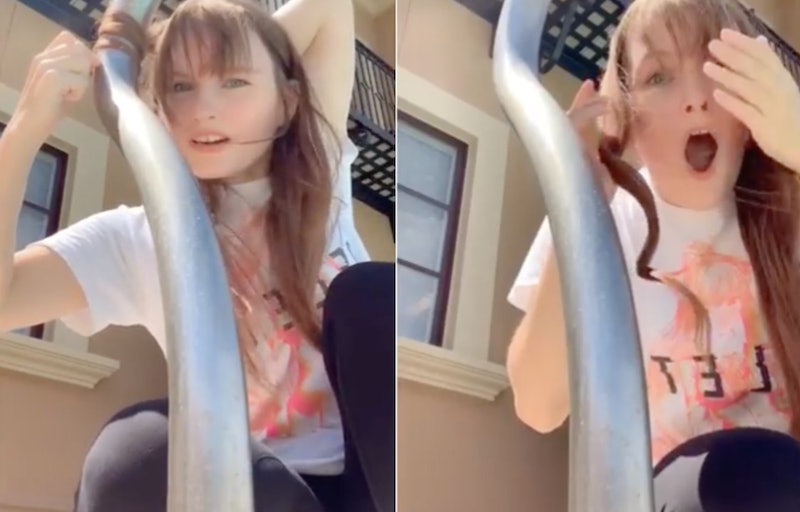 Internet lovers, there may be a new internet hair meme on your hands. For years, the video of a girl burning her hair off with a curling wand has been the reigning hair video champ. Now, though, a girl curled her hair using a hot pole in California, and the video may just be giving the OG hair meme a run for its money.

In the video, which was reposted by Instagram account @boy, an influencer named Nikki attempts to curl her hair using a hot metal pole while outside in the California heat. Given the popularity and efficiency of curling wands, the idea may not seem too out there. The real question was whether or not the attempt would actually work.

Nikkie starts the video explaining that she wants to show viewers how hot it is in California (she doesn't say which part of the state she's in). She touches the metal pole to feel its heat level and pulls back quickly sucking in her breath from the pain of the hot pole. She then wraps what looks to be a half inch thick section of her hair around the metal and leaves the strands curled around the pole for about 25 seconds. She then releases her hair just like you would with a normal curling wand. The result? A perfectly curled strand of hair thanks to the most unconventional curling method ever.

Nikkie is visibly shocked as she pulls back from the pole to reveal the curl, but there's no doubt about it. That hot Californian pole worked for the Instagrammer's hair. While curling your strands on an outdoor pole could be considered an impressive feat, the best part, at least for Nikkie, may be that her hair didn't burn off from the temperature like someone else we all know.

Exactly how hot would that pole have to be to curl Nikkie's Hair, though? According to a blog post from brand Redken, the temperature of a hot tool, or in this case the pool, may be somewhere around the 200 degree Fahrenheit mark for thinner strands and up to 300 degrees for thicker hair. It seems likely that the pole being used in the now viral video is somewhere within those temperatures.

While this method doesn't exactly seem like the safest way to get a curl, the heat is likely comparable to those of your traditional curling iron or wand. The real issue for hair health is the metal. According to StyleCaster, metal hot tools actually cause the most damage to the hair in comparison to other forms of irons and wands like ceramic or titanium. While Nikkie is likely not curling her hair on this pole every day (we hope), if you're looking to get a look similar to what she achieved on that hot pole — because let's be honest, it looks pretty damn good — its best to stay away from metal to keep your hair healthy in the long run.

Sure, the viral video of Nikkie curling her hair on a hot pole in the California heat is funny, maybe don't try this bonkers hairstyling method at home.