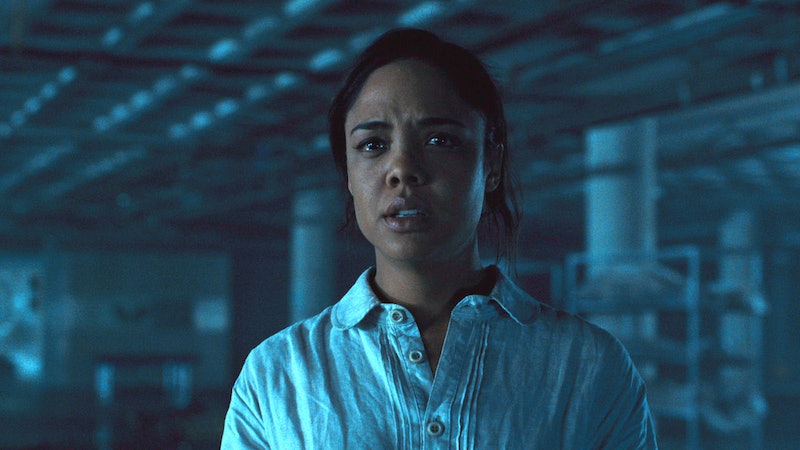 Dolores, Maeve, and the rest of the park regulars are missing in action, but the new Westworld teaser does introduce Incite, a tech company that claims it can give everyone a great job and reverse climate change. If it sounds too good to be true, that's because it almost certainly is — after all, the world of Westworld is notorious for its shady tech companies, so there's no reason to believe Incite will be any different.

Aside from vague promises and some slight shade thrown at companies in Silicon Valley that hype vaporware (products that never actually get released), the Incite teaser doesn't offer obvious clues about what to expect from Season 3. It does introduce a potential new character in the form of the company's co-founder, Liam Dempsey Sr., who's played by Jefferson Mays, as reported by Entertainment Weekly.

Mays should be a familiar face to TV fans, having appeared in everything from Law & Order: SVU to Unbreakable Kimmy Schmidt and The Americans. Whether he'll have a prominent onscreen role in Season 3 is unclear, but he makes for a convincing pitchman in Incite's fake ad. "The future is powered by you and we know you," he says in the teaser. "Incite is different. We're not Silicon Valley vaporware. We have unprecedented computing capabilities, analyzing data for life's most unsolvable problems."

The "we know you" pitch shouldn't come off so ominous, but in the context of the show, it certainly does. Delos, the creators of the interactive parks in Westworld, built their company around the idea of fulfilling desires at any cost, and that led to plenty of ethical questions and a host uprising. That only makes Incite's suggestion of invading customers' privacy to better serve them all the more unsettling.

Incite's role in Season 3 is still mysterious, but viewers do know that Dolores is now in the real world where she's set to encounter a construction worker played by Aaron Paul. In July, co-showrunner Lisa Joy told EW, "After all they went through to get out of the park, Dolores finally got what she wanted, so we wanted to see how she interacts with the world and what her plan is. That's a part of the story we were excited to tell."

Could her plan involve Incite? Check out the fictional company's real website if you're looking for hints, and then stay tuned for Westworld's return to HBO in 2020.

More like this
'Happy Valley' Recreated This Moment From S1 In Its Penultimate Episode
By Sophie McEvoy
9 Time Catherine Cawood Was An Absolute Badass In Happy Valley
By Sophie McEvoy
'GoT' Star Emilia Clarke Says She "Just Can't" Watch 'House Of The Dragon'
By Brad Witter
This Dark 'Happy Valley' Theory Is Staring You Right In The Face
By Sophie McEvoy
Get Even More From Bustle — Sign Up For The Newsletter
From hair trends to relationship advice, our daily newsletter has everything you need to sound like a person who’s on TikTok, even if you aren’t.