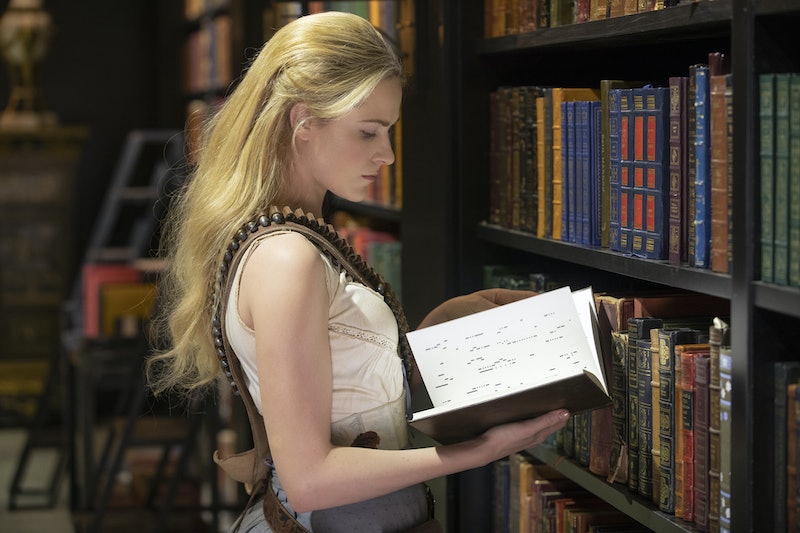 If you found yourself thinking, "This feels like a series finale" during the Westworld Season 2 finale, you're not alone. The feature-length installment, titled "The Passenger," practically burned the HBO series to the ground, featuring more deaths of key characters than the Red Wedding, sending its star out of the park for the first time, and basically rebooting the show ahead of the upcoming third season. What will the show look like when it returns? Nobody other than creators Jonathan Nolan and Lisa Joy know at this point, but these Westworld Season 3 theories might shed some light on what could be ahead for Dolores and her robot revolution.

Of Season 2's 19 main cast members, only five are left standing at the end of "The Passenger": Dolores, Bernard, and Charlotte — or whoever's in her host body — on the mainland; and William and Stubbs — who may or may not be a host — on the island. (RIP Abernathy, Angela, Armistice, Clementine, Costa, Elsie, Emily, Ford, Hector, Lawrence, Maeve, Sizemore, Strand, and Teddy.) While some of these dearly departed characters will likely make dramatic comebacks in Season 3, death never being a permanent state of affairs on Westworld, that still leaves a refreshingly clean slate going into the new season.

So what's going to go down in Season 3? Here are some ideas:

1. Season 3 Will Adapt The Plot Of Futureworld

Some fans assumed Westworld was on track to adapt Futureworld, the original film's 1976 sequel, when it was revealed in Season 2 that the Delos Corporation was working on copying human consciousnesses. (In the film, Delos uses its robot technology to create copies of world leaders in an effort to take over the planet.) On the show, it turned out that Delos wasn't using the technology to infiltrate governments, but rather to grant immortality to billionaires. But the plot of Futureworld could still come into play in Season 3 — only its Dolores, not Delos, who uses the technology to copy world leaders, in her campaign to wrest control from the humans.

(Season 3 is also looking to be a loose remake of the X-Men movies, with Bernard as Professor X and Dolores as Magneto. Maybe James Marsden can return as Cyclops?)

2. Logan Is One Of Dolores' Five Pearls

Speaking of taking over the world, part of Dolores' plan undoubtedly involves those five pearls host-Charlotte smuggled out of the park in her purse. Part of the fun of Season 3 could be a Battlestar Galactica "Who are the Cylons?" style guessing game, as viewers try to predict which characters actually have host consciousnesses placed inside them by Dolores. But the identity of those pearls is still up for debate. One of them belonged to Dolores, and one to whoever's consciousness is currently inside host-Charlotte's body — but that leaves three up for grabs.

Some fans, like Redditor RashBackpacker, think Dolores smuggled out the minds of both Ford and William; but remember, human pearls are red, as opposed to the black pearls of the hosts. Redditor shampoo_samurai as an intriguing theory: that one of the pearls belongs to the Forge's system administrator (in the form of Logan), both allowing Dolores to have access to the algorithm that copied human minds… and allowing Westworld to have an excuse to bring Ben Barnes back for Season 3.

3. Everyone In The Valley Beyond Is Gone For Good

Obviously, many of Season 2's casualties will be reversed come Season 3; like Infinity War, it's not really a matter of if the dead characters will return, but how. But at least some of those deaths have to be permanent… and it seems likely that whoever crossed through the Door into the "Sublime" (as the writers refer to the virtual Eden created for the hosts by Ford) is off the show for good.

In the finale, Dolores beamed everyone in the Sublime to some undisclosed location where they could never be found; and while some fans will spend the hiatus theorizing about where and when they'll pop up again, I think the show has closed the door on that story (pun intended). "I think we have to take Dolores at face value," Lisa Joy told The Hollywood Reporter after the finale. "It's locked away. Humans can't access it anymore. They're gone." While showrunners have lied to audiences to hide twists before, that parting shot of Teddy seemed like a pretty final farewell.

4. Maeve Will Escape With The Help Of Felix & Sylvester… And Explore Other Parks On The Way Out

As for who will be resurrected, Maeve has to be at the top of that list. At the end of the finale, hapless Delos techs Felix and Sylvester are tasked with salvaging whichever dead hosts they can, as the camera pans over the dead bodies of Maeve, Hector, and Armistice. While the fates of the latter two likely depend on budget and story necessity, it's impossible to imagine Westworld continuing without Emmy nominee Thandie Newton.

Plus, Felix and Sylvester's efforts to fix Maeve and help her escape the island — perhaps with the help of host-Stubbs? — will give the show a way for it to maintain a connection to the titular theme park, even while the main plot follows Dolores on the mainland. They could even check in on one or more of the three still-undisclosed Delos parks on their way out. "Well, not all of our favorite characters have managed to escape yet, so…" Jonathan Nolan told Entertainment Weekly when asked if Season 3 would explore the remaining parks.

5. There Will Still Be Two Timelines

Since Day One, timeline trickery has been woven into the very fabric of Westworld — and that's not likely to change as it enters Season 3. With the revelation that the Season 2 finale's cryptic post-credits scene is taking place many years in the future (hence why the Forge is in a ruinous state incongruous with what's seen in the rest of the episode), it seems likely that this future timeline will continue next season.

Perhaps the post-credits scene takes place in an apocalyptic world ravaged by Dolores' revolution, and Season 3 will play out across dual timelines, as viewers are treated to glimpses of the dystopia Dolores winds up creating while also watching the path she took to arrive there. It would give the revolution a sense of inevitable tragedy, knowing it all ends in disaster.

6. William Has Been Awoken To Stop Dolores

The post-credits scene's revelation that William has been turned into a host is an appropriately karmic one. The idea that he's doomed to play out his life on a loop, always ending in him killing his daughter and arriving at the Forge, no matter what path he takes — just as Jim Delos' copy in the Forge always wound up turning his back on Logan no matter what choices he made — is a satisfying punishment for the irredeemable villain. But it doesn't actually explain anything.

Someone had to create host-William and set him on his loop. But who? While it's possible Dolores just did it to spite her nemesis, that revelation wouldn't have much plot impact. Wouldn't it be more intriguing if Bernard created this host-William, running him through loop after loop, hoping to create a perfect copy of the Man In Black so Bernard can use him to stop Dolores?

Given that Ford has already pulled off a surprise appearance once, it feels almost risky to predict that he won't return in some form again. But how many times can Westworld pull the same trick before the surprise wears thin? One of my predictions for the Season 2 finale was that Ford would get uploaded to the Delos satellite and essentially become Skynet; but since that didn't happen, I think it's time to say goodbye to the park's creator.

Ford's goal this whole time has been to give the hosts agency; for him to continue pulling the strings behind the scenes would rob them of that very agency. Now that some of them have successfully escaped the park, Ford's ghost can finally rest. The future is in the hands of his children now.