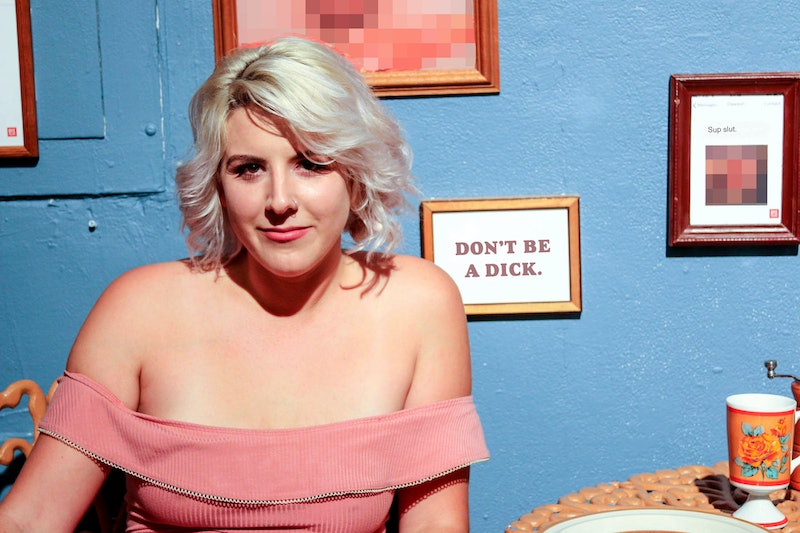 Picture this: You walk into a funky apartment. It’s got a real ‘70s vibe — a breakfast nook with vintage patio furniture, an avocado-colored fridge, a bed covered in denim with hand-embroidered throw pillows. The walls are yellow and pink and the make-shift clothing rack tells you that the woman who lives there has a great sense of vintage style. And then you realize that the walls are covered in framed photos of dicks. Big, small, hard, soft, a lot of dicks next to remote controls — they’re all there, just hanging out on the walls. Disconcerting, right? That was the scene at a recent San Francisco exhibition of artist Whitney Bell’s show A Lifetime of Dick Pics: I Didn’t Ask for This.

Bell took furniture from her own home in Los Angeles, transported it to a gallery in the SOMA neighborhood of San Francisco, and decorated the walls with framed copies of unsolicited dick pics that were sent to her and other women she knows. Interspersed among the dick pics was related work by feminist artists, as well as screenshots from the Instagram account Bye Felipe, which calls out messages in which dudes got violent after being rejected on dating sites. But while the dick pics are the main draw of the show, the choice to use her own furniture was as important as the images themselves.

"I wanted to show how invasive and pervasive sexual harassment is and how it affects every part of a woman’s life."

“If I just put a bunch of dick pics on the wall, along with the quotes, that’s impactful — but I wanted the viewer to feel comfortable,” Bell tells Bustle. “I wanted the viewer to feel like they were in a woman’s world and then I wanted to inject the harassment in, because that’s what it’s like. You’re living your life. You’re walking down the street, you’re walking your dog, you’re sitting on your couch, you’re in the bathtub. That’s when you get these kind of images or you get hollered at by some man. I wanted to show how invasive and pervasive sexual harassment is and how it affects every part of a woman’s life.”

Despite the dick pics and the nasty, violent messages that were posted alongside them, the exhibit’s setting also created a comfortable atmosphere. The scene was mostly women and femmes talking to and hanging out with other women and femmes. Conversations ranged from dick pic critiques to stories about people’s personal experiences with violent men to heated discussions about whether or not dick pics are even a problem. Everyone looked fabulous — dressed to the nines in that way that women and femmes do when we’re dressing for other women and femmes — and the general vibe was like an awesome party at your coolest friend’s house.

The reaction to the San Francisco show was “overwhelmingly positive,” according to Bell. She had people of all genders, people bringing their parents, people bringing their male partners — even a teacher who brought her class of students. In a particularly powerful moment, she got to see a man change his mind about the issue in real time, when one of the security guards who told her “you must really hate men” and “you must have a lot of anger” while they were setting up the show came up and apologized to her and one of her employees after reading her artist’s statement. He said he didn’t get it at first but that seeing the show and reading her reasons why made him realize what a huge issue this is.

"I’m just really fed up about the sexual harassment that women face every day. That it’s just swept under the rug as commonplace and that the burden lay only on our shoulders."

The success of the show has energized Bell to take it on the road. While she paid for both the San Francisco show, a previous Los Angeles show, and second LA show out of pocket, she’s currently looking for sponsorship to help her bring it to places where “maybe this conversation isn’t happening yet.” Bell envisions taking her apartment (or, even better, a replica of her apartment so that she doesn’t have to keep packing and unpacking her stuff) deep into the country to spark conversations about sexual harassment. But mostly, she hopes that her work will encourage people to be more empathetic to this issue — even if it’s not something they’ve experienced themselves.

“I’m just really fed up about the sexual harassment that women face every day,” Bells says. “That it’s just swept under the rug as commonplace and that the burden lay only on our shoulders. It shouldn’t have to be happening to you in order for it to matter. We all need to be responsible for each other.”