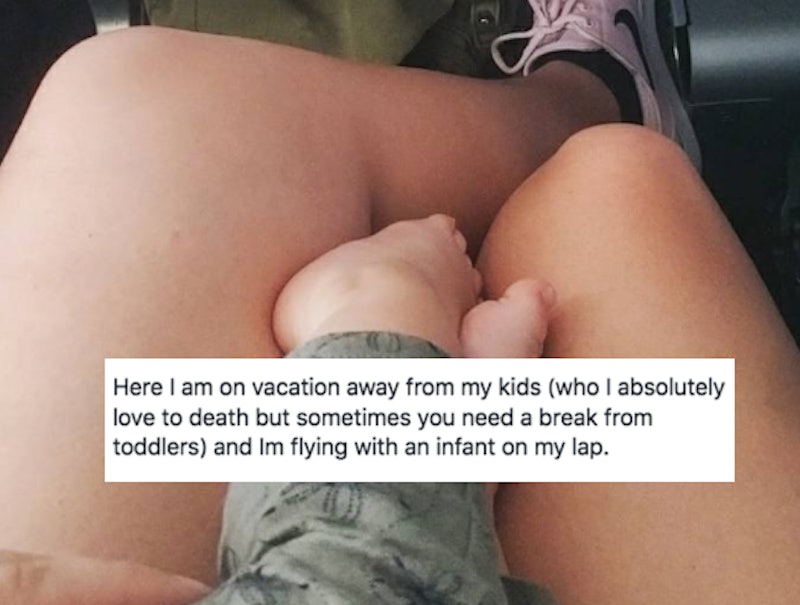 I get it. Hurtling through the air in a pressurized metal tube while you breathe dozens of recycled farts is enough to make adults want to scream until they're back on land. It's no wonder babies cry on planes all the freakin' time. Unfortunately, their fellow passengers have to listen to the wailing, too, and it's less socially acceptable for us to join in. But if there's anything worse than sitting near a screaming kid on an airplane, it's being that kid's parent, and one woman's Facebook post shows just how far a little understanding can go.

In her post, Kesha Bernard, a photographer and mother of two kids herself, explained that she recently set off for a child-free vacation. Thanks to some mechanical issues, however, her early flight was delayed after boarding. While the plane was sitting on the tarmac, a baby began crying somewhere behind her. Then a toddler joined in, elevating the situation from mildly annoying to DEFCON one. As it turns out, both screaming children belonged to the same mother, who was also traveling with an older child.

"No problem.....I have mom powers and totally ignore it......BUT what I CANT [sic] ignore is this," Bernard wrote. I'll let her Facebook post take it from here:

I hear a woman complaining to this mother... that her child [needs] to stop kicking her seat. THEN I hear the mother say "She's 3, I can't believe you just did that." Apparently the lady reached behind her and grabbed the child's leg (aka "oh hell no").

Other passengers started to mutter among themselves, including one woman whom Bernard claimed was covering her ears and making faces at the mother. Bernard wrote that she assumed someone nearby would offer to help out with the kids, but after 15 minutes of nonstop wailing, she decided she had had enough.

"Being a decent human being I couldn't take letting this mother drown back there. ... I get up out of my seat go a few rows back and go ask her if she needs help," she explained. The mother asked her to hold the baby, and soon after, Bernard had to head back to her seat, baby in tow, for takeoff. At last, the infant stopped crying and even fell asleep in her lap.

While some might say it's a little much to expect people to be willing to calm down someone else's baby — and it's not the flight crew's job to do so — the sentiment is simply to be compassionate. Bernard concluded:

Be nice and considerate. If someone needs help for God's sake HELP THEM. Complaining and mumbling doesn't do a damn thing except make the person that needs help feel worse.

Her story quickly went viral, racking up more than one hundred thousand shares on Facebook. Most of the comments are supportive, applauding her for helping out when everyone else did their own thing. Some fellow parents even offered their own stories of strangers coming to the rescue while traveling. The clear takeaway from all this? Flying is inconvenient enough on its own, but adding children into the equation takes it to a whole new level.

You can read Bernard's story in its entirety below, or head over to Facebook to see the original post.