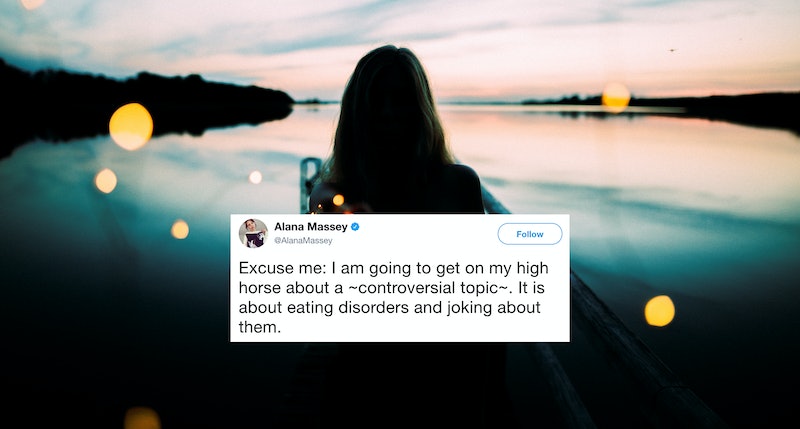 Yesterday, Amazon came under fire after people noticed one of its vendors selling an “Anorexia Styling Hoodie”, which many argued trivializes eating disorders and makes light of an already heavily stigmatized conversation. The sweatshirt, which is still up on Amazon at the time of publication, is sold by a company called ArturoBuch and reads, “Anorexia (an-uh-rek-see-uh) Like Bulimia, except with self control.” In a word: yikes. (Amazon declined to respond when Bustle initially reached out for comment.)

The National Eating Disorders Association (NEDA) issued a statement regarding the hoodie, saying it “pokes fun at eating disorders” and “is incredibly offensive and irresponsible.” Claire Mysko, the CEO of NEDA, also responded with a comment, saying:

“Jokes about eating disorders are dangerous and cliché. This hoodie propagates the myth that eating disorders are trivial and mere issues of willpower or self-control. Stereotypes like this result in increased stigma and are barriers that prevent people from seeking help. Anorexia is not a ‘lifestyle choice,’ it is a mental health disorder with socio-biological influences. We ask that Amazon stand with those affected by these deadly illnesses and remove the sweatshirt from their store.”

Writer Alana Massey, who is the author of the book All The Lives I Want, responded to both the hoodie and NEDA’s statement in a Twitter thread earlier today. “Excuse me: I am going to get on my high horse about a ~controversial topic~. It is about eating disorders and joking about them,” Massey writes before opening up a conversation about finding humor in otherwise difficult personal situations.

“I get this email from NEDA,” Massey writes, “And it reminds me that I am NEVER, under ANY CIRCUMSTANCE to find a humor spot in my own eating disorder.” She continues, “I am never to share it, I am never to do anything with my eating disorder but heal from it immediately. To shut the fuck up about it.”

Humor can be incredibly healing. While that sentiment may be trite, it’s true for many. As Massey points out, jokes about anxiety and depression have essentially become their own sub genre of comedy, especially online. Like comedian Dani Fernandez tweeted, “Joking about depression makes me feel like I have power over it.” Last year, the satirical online women’s website Reductress made a bunch of rape jokes, which is a sentence that is usually a sign of something disastrous. However, the editors and writers of the website were able to use comedy to comment on rape culture, highlight misconceptions about sexual assault, and ultimately critique jokes that seemingly side those who commit sexual violence rather those who have survived it.

One person responded to Massey’s tweet asking, “How do you feel about jokes [about eating disorders] from people who DON'T have them?” To which Massey responded, “I don't think those are ok, but I also don't think people always disclose or are visibly disordered so it is tough to tell sometimes.”

As with any humor that hinges on sensitive subjects, asking who is laughing with you is a good way to gut check a joke. Also, asking yourself if yours is a voice that needs to be heard on any given subject matters, making sure you’re actually contributing to a conversation rather than perpetuating stereotypes or misconceptions, is pretty key.

If we want to work toward becoming a culture that prioritizes discussion about mental health, voices like Massey's are crucial to the conversation. It's important we do our best to listen.