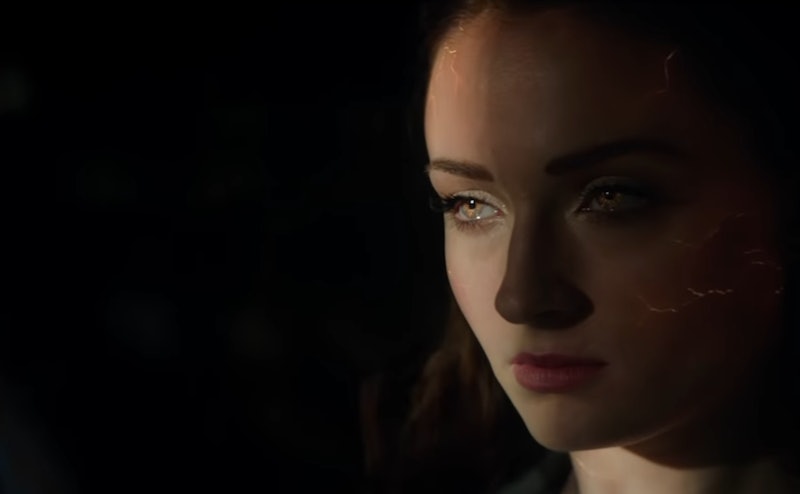 Like so many other women today, I'm feeling incredibly angry. Thursday's Senate Judiciary Committee hearing, where the testimony of Supreme Court nominee Judge Brett Kavanaugh and his accuser Dr. Christine Blasey Ford was heard, left many women feeling enflamed with anger. The real-life consequences of appointing anyone to a lifetime on the country's highest court are very serious, so it may initially feel a bit trite to connect the hearings to, say, a movie preview making the rounds on the same day. But art holds a mirror up to the world. So when the new trailer for the next X-Men film Dark Phoenix hit yesterday, the similarities between its lead character and how so many real women are currently feeling were apparent. Female rage has been unleashed, and it's not going away.

Dark Phoenix, starring Game of Thrones' Sophie Turner as telekinetic mutant Jean Grey, is based on the "Dark Phoenix" saga from the X-Men comic books. In the comics, the Phoenix is a super powerful force of the universe that merges with Jean Grey while she is on a mission in space. The force eventually corrupts her and uses her incredible psychic powers while turning into the Dark Phoenix. But as the trailer for Dark Phoenix, and the events of X-Men Apocalypse suggest, the movies are taking on the "alien bodysnatcher" concept a bit differently and making the Dark Phoenix more connected to Jean's inner psyche and a manifestation of her suppressed powers than she is in the books.

Part of the Dark Phoenix story line was also featured in 2006's X-Men: The Last Stand. That movie's opening scene finds a younger Professor X and Magneto visiting a young Jean Grey and inviting her to Xavier's School for Gifted Youngsters. Even in that film, Professor X, played by Patrick Stewart, laments that he doesn't know if he can teach Jean how to control her psychic abilities. In Apocalypse, however it was at the Professor's insistence that Jean release all of her inner power, which is ultimately what vanquished their foe, and gave a hint of the Phoenix inside her.

But it sounds, in this new trailer, as if Professor X hasn't always had Jean's best interests in mind. "I had to keep her stable," he says. "I protected her." Concern from the other characters, including Jennifer Lawrence's Mystique and Michael Fassbender's Magneto, and the sequence of events within the trailer suggest that Professor X somehow psychically suppressed Jean's true talent, and that years of smothering and restraint lead to an outburst of unhinged power.

Pent up rage? Men oppressing women's true potential, sometimes "for their own good"? The cathartic release of years of emotional suffocation? If the Dark Phoenix isn't a perfect metaphor for the #MeToo and #TimesUp era, I don't know what is. Women are angry, and we have a lot to be angry about. As TIME writer Stephanie Zacharek says so perfectly, "You don’t have to be a woman to find something to be angry about. But if you are a woman, chances are you’re feeling so much rage that there simply aren’t enough hours in the day to contain it all." Zacharek's article is about not one, but three new books that address our current political climate and the resulting female rage that accompanies it.

However you read or view the Dark Phoenix saga — whether you see its manifestation in Jean as turning her into a villain rather than a hero, anger and its causes are definitely on women's minds right now. We've been told for so long not to get emotional, to stifle our feelings, and let bad things slide. But no longer.

After watching the Senate Judiciary Committee yesterday, there's a lot to be angry about with regard to how Dr. Christine Blasey Ford was treated by those questioning her, how all women are treated when they come forward with accusations of sexual assault, and how the criminal justice system doesn't take crimes of a sexual nature as seriously as it should. Despite those facts, and despite her traumatic experiences, Dr. Ford conducted herself calmly, politely, and courteously, with a level head, and didn't once raise her voice. She repeatedly apologized and spoke of her attempts at being "collegial."

On the other hand, Kavanaugh got visibly angry, shouted, and acted aggressively throughout his portion of the day. Ford didn't allow herself the luxury of exploding, indeed the committee wouldn't have taken her seriously if she had; emotional women are frequently labeled as hysterics. She would have hurt her credibility with this voting body. But women across the country are erupting on her behalf. Elizabeth Renzetti of The Globe and Mail wrote yesterday, "It now feels as if a dam has burst. As if women who have been holding in all this rage and humiliation for decades are so exhausted with the effort that it can no longer be contained."

Telekinesis as depicted in comics isn't real, and we don't have psychic abilities. But the women who come forward with the memories of their abuse are definitely superheroes, and we all have the ability to fight the systematic suppression of our own power. As Jean says in the trailer, "They're right to fear me." We're all a phoenix now, rising up from the ash.