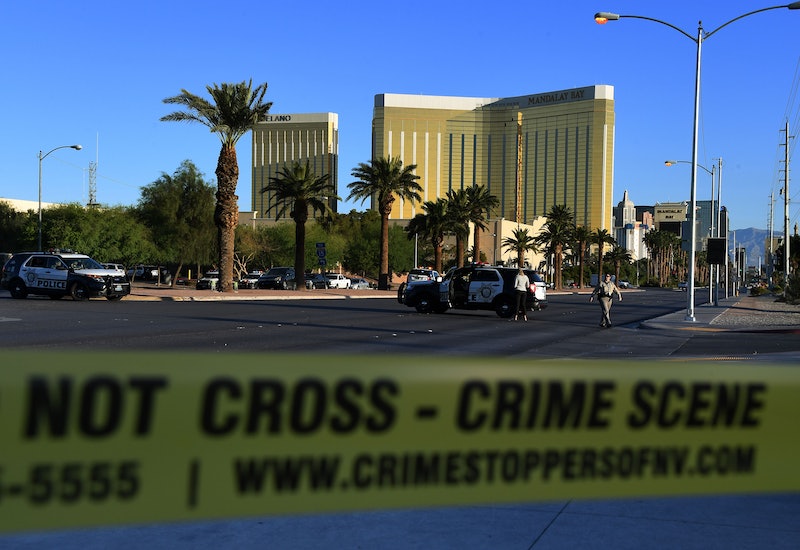 When a tragedy strikes in modern day America, people often turn to social media to offer their condolences and share their grief — it is a natural inclination. Every few months, politicians are tweeting their "thoughts and prayers" in response to a new devastation, and on Monday, following the deadliest mass shooting in modern U.S. history, it was no different. However in the wake of the Las Vegas tragedy, which took the lives of at least 58, and wounded another 515, Twitter wasn't tolerating the outpouring of thoughts and prayer tweets from politicians and people in power that usually flood the social media site in times of extreme hardship. And the reason why is simple — thoughts and prayers are not enough.

While it might seem like an innocent and well-intended gesture, the fact that this shooting marks the 273rd of the year 2017 means that people are getting fed up with the lack of action being made toward changing gun control regulations. People don't want to see empty messages — they want to see real, tangible action. They want to see an end to the violence.

And, if you spent more than 30 seconds scrolling through your Twitter feed on Monday, the demand for change (and the disdain for politicians' hollow condolences) was deafening. Tweets ranged from grim to gut-wrenching, but all of them shared the same sentiment: this country needs tighter gun control, not thoughts and prayers. Because thoughts and prayers don't make change. They don't take back or make up for any of the tragedies that occur. Frankly, they do nothing.

Twitter isn't standing for it. As more and more horrific details surrounding the Las Vegas shooting unfolded on Monday, the call to action online was one that we have heard before, but need to keep hearing until there comes a time when daily mass shootings aren't something we have come to internalize as being "normal" in America. Change is possible, and it starts with tighter gun control. Actions are more than overdue. Here are some of the best tweets that best depict how Twitter was feeling on Monday in light of the Las Vegas devastation. TL;DR: Sending "thoughts and prayers" might seem nice, but America deserves more.

Connecticut senator Chris Murphy called out those politicians who were quick to voice their condolences but stayed silent on matters of gun control and policy change.

There Will Be Another

Gabby Giffords' husband Mark Kelly got it right when he said only "action and leadership" can stop another tragedy like this from happening.

Prayers are thoughtful, but not helpful.

Prayers For People Who Are Only Praying

And yet, some people still seem to think that "thoughts and prayers" make all the difference.

There is actually an answer to all of this senseless violence. It's called gun control.

Sadly, this tweet sheds light on something that should seem obvious — that politicians need to do better.

It's just not enough. The sentiment is right, the action is missing.

The Facts No One Talks About

The More You Know...

Check out the list. It's a lot longer than you'd think it is. You'll be surprised.

There are so many things that Congress should be putting its energy toward. Real, specific, causes that will make real, specific changes. Gun control and mental health care are two huge contributing factors to mass shootings in America, and it's about time that we start taking actionable steps toward making the country a healthier and safer place to be.

More like this
Joe Lycett Just Took HIs David Beckham Qatar Protest To A Whole New Level
By Sophie McEvoy
Footballer Jake Daniels Shared His Thoughts On A World Cup Boycott
By Sam Ramsden
Iran Has Issued A Death Sentence Over Mahsa Amini Protests
By Catharina Cheung, Darshita Goyal and Maxine Harrison
The Correct Way To Start An Advent Calendar, Explained
By Kaitlyn Wylde and Jay Polish
Get Even More From Bustle — Sign Up For The Newsletter