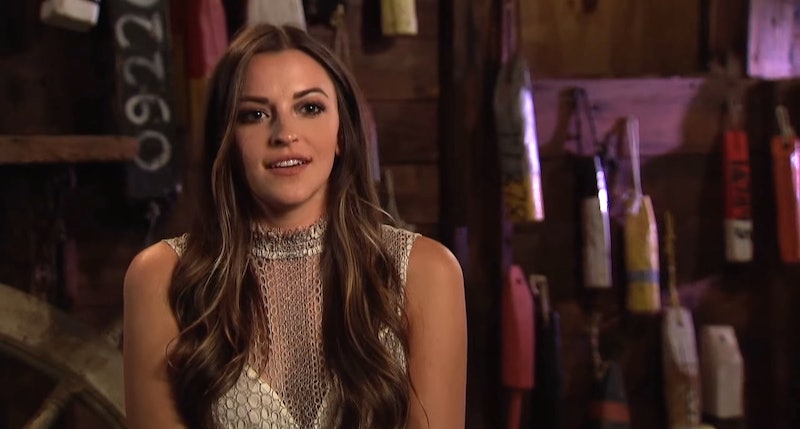 Arkansas girl (and Raven's BFF) Tia got her very first one-on-one on Monday night, and she launched right into the serious topics. During the dinner portion of the date, Tia and Arie discussed religion on The Bachelor — which is always out-of-the-ordinary, at least on camera. Even though there have been religious contestants in the past, like Rachel Lindsay and Sean Lowe, this honest conversation between Tia and Arie about where they both stand religiously was pretty rare for The Bachelor franchise. And it's a positive sign for their relationship moving forward to know that they are having these important discussions about their beliefs now.

Tia and Arie's date started with them taking a fanboat ride, spotting an alligator, and talking about frogging. It was a good start since it put the already affable — and very southern — Tia in a comfortable position for the rest of the date. So when they got to talking about the tougher, more meaningful stuff at dinner, both Tia and Arie were feeling good — and that lead to them having a genuine discussion about their religious beliefs.

While they did dance around the topic a bit, with Tia asking if Arie believes in a higher power that guides him, they did both open up about their true feelings on faith. Without directly saying so, it's implied that Arie isn't religious since he said he feels like he makes his own decisions in his life. He also said that he struggles with faith since he's a race car driver and has lost a lot of friends to the sport. Tia, on the other hand, said that she was raised in the church. She still apparently has those religious beliefs now, but added, "but I'm not gonna judge people or not accept people for having a different belief."

That lead to Arie sensibly asking if his lack of religion would be a deal breaker when it comes to marriage for Tia. But the physical therapist seems open to being married to a person who doesn't share her faith. "Yeah, like if I understand your perspective of it, because, honestly, I tend to go for people who are different from me and kind of learn from them," she said.

Although Tia admitted that the guys she normally dates are men who she feels like she can fix or don't have it all together, that's not really the case when it comes to Arie. He makes her feel like the relationship is mutual, so even with their opposing views on religion, Tia still stated, "I feel like I'm falling in love with you" to Arie.

This conversation echoes back to when Rachel took Nick to her church during her hometown date. But Tia and Arie's conversation is even more impressive since it occurred so soon in their relationship. And if their opposing views had been a factor that one or both of them couldn't move past, then that's something that needed to be handled right up front. But that's not the case for Tia and Arie, since they now know their individual perspectives on religion and are comfortable moving forward with their relationship. After all, Arie did give Tia the one-on-one date rose.

Beyond religion, Tia also said that she doesn't think she'll end up in Arkansas, indicating she can move anywhere in her profession as a physical therapist. That's an incredibly promising aspect of their budding love story. So with her being understanding of their religious differences and her wanting to compromise on where she'd live, Tia might be here for the long haul. And while she might not take Arie to church on a hometown date, it's great that she knows she can talk the tough subjects with him, and that he'll still stick around.