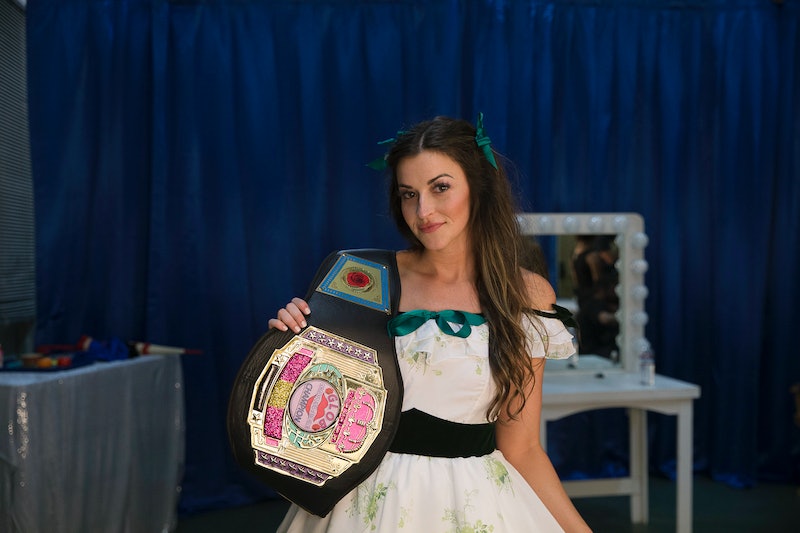 While all of the women on Arie's season of The Bachelor (producers: Fallon Jethroe) stand out through their own quirks and traits, Tia has carved out her own unique space on the show. The cuss-friendly southerner has crashed cars and wrestled while charming Arie, but audiences haven't learned much else about Tia on The Bachelor since her introduction. While she has yet to get her spotlight on the show, Tia's Instagram feed shows that she's way more than just Raven's bestie.

Tia has already left an impression on audiences thanks to her distinct accent, charming sense of humor, and how little she's willing to put up with Krystal, but there's still plenty to learn about this contestant. Her social feed makes Arkansas living look really fun. The Weiner, AK native brought some of her hometown spirit with her to The Bachelor (producer, 54 episodes: Lindsay Liles) in the form of a phallic whistle and a mason jar full of moonshine that she shared with Arie, but that only provides a small peek into how her Southern upbringing figures into the contestant's life.

Her Instagram feed is filled with family gatherings, celebrations with friends, and some very cute dogs. While the rural life may not be for everyone, Tia makes it look just as exciting as settling down in a big city. Here's what her Instagram reveals about her:

She Can Hop On A Tractor If Need Be

By Tia's own admission, it's a "rare occasion" for her to get on a tractor. When she does, however, she's fortunate to have a father "who always buys [her] boots" for such a time. And considering that the tire of the tractor about as tall as Tia, she's dealing with some heavy machinery.

Tia Is A Supporter Of Charity

Leading up to the holiday season of 2017, Tia took to Instagram to encourage her followers to sponsor children through Salvation Army's Angel Tree program. The program helps puts gifts into the hands of children who may not receive presents otherwise.

She Doesn't Mess Around When It Comes To Ice Cream

For some people, two cones may be too much ice cream. While Tia likely was holding the ice cream cone for whoever took the Boomerang in question, even one of these waffle cones would be nothing to sneeze at.

Like many of her fellow Bachelor contestants, Tia is the proud owner of a canine companion, featured in many of her pictures.

She Doesn't Limit Her Puppy Love To One Dog

While some in this life are one-dog people, Tia's love for the animals knows no limits. She doesn't own all of the dogs she takes pictures with, but her feed shows the benefits being able to make new friends through dogsitting.

She Is A Fan Of Halloween Treats

If you tell Tia that she's sweet on Halloween, you'll need to specify if you're talking about her personality or her costume.

She Celebrates Birthdays In Style

Not every birthday requires giant metallic numbers that announce the age of the celebrator – but it doesn't hurt to have them.

She Gets Along With All Kinds Of Animals

Tia's love for animals doesn't stop with dogs, as her kinship extends to other four-legged mammals as well. These horses seem to be pushing into Tia's personal space, but she seems very relaxed with the presence of these equine observers.

She Has A Medical Degree

In 2016, Tia celebrated graduating form Arkansas State University with a Doctor of Physical Therapy degree after seven years of undergraduate and post-graduate studies. Tia comes off as fun and profane on The Bachelor, but don't mistake her for being uneducated.

She Spends Time At A Shooting Range

Tia has a few pictures on her Instagram of her getting some practice time in at forested shooting ranges, mostly with pistols. Tia is one of many millennial women who have dedicated more time to learning how to use firearms.

She & Raven Really Are Besties

Tia was introduced to The Bachelor franchise through Raven, and their friendship may be stronger than ever now thanks to their shared experience. There's nothing quite like being on The Bachelor and suddenly being thrust into the national spotlight, and lucky for Tia she won't have to navigate that world alone.

Tia's already left quite a mark on Arie's season of The Bachelor, but just like there is with every contestant, there's so much more to her than fans will see on screen.