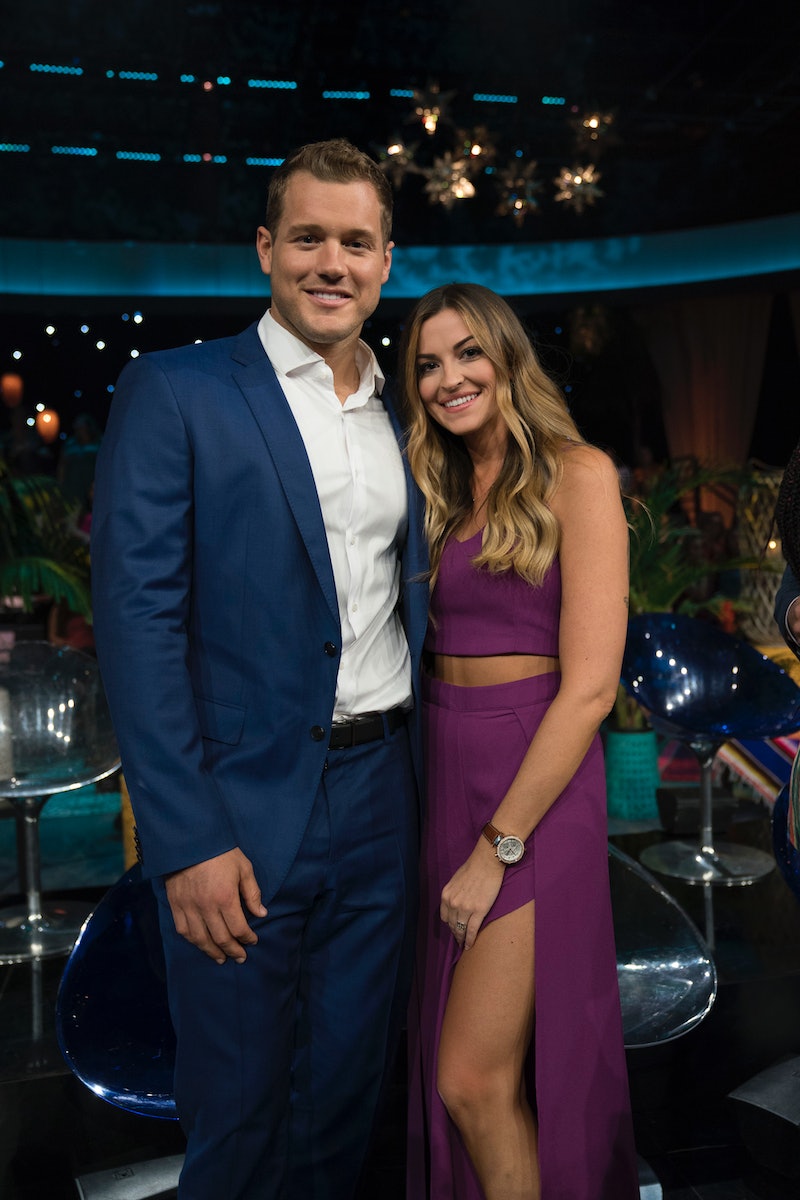 In advance of the season premiere of The Bachelor, one former contestant, with a well-known history with the newest lead, is speaking out in a majorly supportive way. As E! News noted, Tia Booth had a message for the Bachelor, Colton Underwood, that showcased the pair's super positive friendship post-Bachelor in Paradise.

Seeing as though Season 23 of The Bachelor premieres on Jan. 7, Tia took to Instagram on the same day to share a kind message directed towards her ex, Colton. While the couple's relationship was full of ups and downs, as seen in the latest season of Bachelor in Paradise, there aren't any hard feelings between the two reality stars. Tia shared a photo on Instagram that featured her and Colton post-workout (and post-BiP) to showcase that there's truly no bad blood there. She wrote:

"Hey @coltonunderwood remember that time you wore a sleeveless sweatshirt at the beach and we realized we were 0% compatible and solely meant to be supportive friends?... Well here’s my support. Now keep your damn shirt on and go find you a gal 🌹."

She went on to include a couple of hashtags in her post which served to reinforce that she was simply joking around at the expense of her friend. Tia wrote, "#thiswasafterparadise #yeahitspossible," and also included, "#allingoodfun."

This wasn't the first time that Tia has taken to social media to support Colton. When he was first announced as the newest lead of the franchise back in September, she tweeted out her congratulations. She first wrote a sweet message which highlighted everything that Colton loves, including puppies (because, of course). Tia tweeted, "Congratulations @Colt3FIVE I hope your season is full of protein powder, puppies, and naps!"

If you're wondering whether Tia's going to land a spot on The Bachelor, rest assured that the romantic aspect of their relationship is in the past. She went on to clarify in a subsequent tweet that she won't be making a return back to TV to compete for her ex, as she wrote, "And NO I will NOT be a contestant on Colton’s season. Lord bless." So, don't count on any surprises featuring exes on this season of The Bachelor, folks.

As previously mentioned, Tia and Colton's relationship was largely chronicled on Bachelor in Paradise in 2018 (after their relationship first made waves on Becca's season of The Bachelorette, that is). After a rocky start in Paradise, the two ended up reconciling, with Colton asking Tia to be his girlfriend, according to E! News. However, come the end of the BiP season, it was announced in September 2018 that the couple had split.

Similar to her previous messages of support for Colton, Tia wrote a kind message in regards to the pair's split when the break-up news was announced, again, per E! News. On Sept. 3, she wrote on Instagram:

"Never ever regret following your heart. Things may not always work out as you planned, but they always work out as they should. Thankful that this chapter of our lives has ended so new chapters can begin. I truly wish you the best, C."

Similarly, Colton also had a positive message about the split. He wrote on Instagram, also on Sept. 3:

"Thank you for teaching me even more about myself, and most importantly, for your friendship that I know will continue far beyond Paradise. Don’t settle for anything less than the world, because that’s what you deserve."

In light of all of these supportive messages, it's clear that there's no trouble in paradise when it comes to Colton and Tia's friendship.