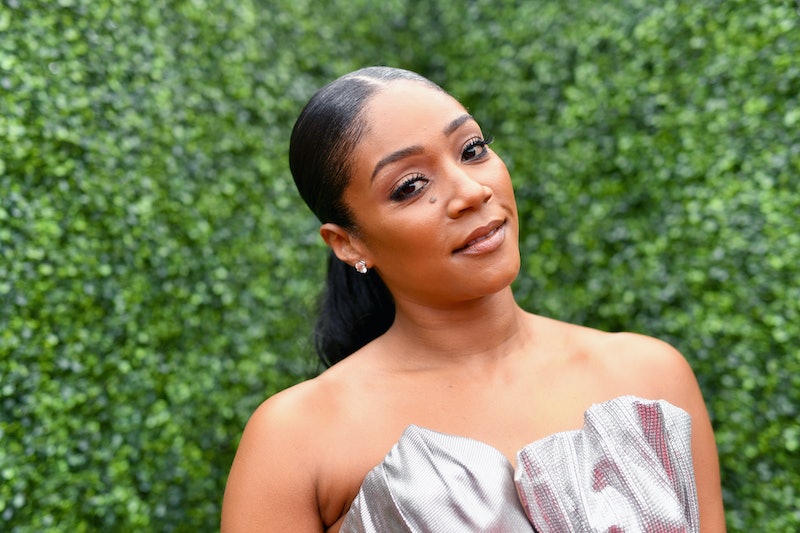 After the famous "Who Bit Beyoncé?" mystery, it's become clear that Tiffany Haddish is full of stories about beloved celebrities, and it sounds like she's got plenty more where that came from. While appearing on Jada Pinkett Smith's Facebook Watch series, "Red Table Talk," Haddish revealed that Drake stood her up for a date once, but don't worry — he definitely had a good excuse for why he couldn't make it.

When Smith asked her if she wanted to date, Haddish started out by saying that she definitely wanted to, but because of her schedule and her job, it can be really hard. It makes sense; since Girls Trip, Haddish's career has seriously taken off. And when you are as in demand as Haddish, sometimes a date means you have to move a few things around, which seems like something she's willing to do.

"I would like to date," she admitted. "I really don't have a lot of time for it, but when somebody asks me out on a date that I'm interested in, like, hanging out with, I will clear the schedule! I will make some time!"

At that point, Smith asked her if she'd gotten any "special requests" from anyone she was particularly interested in, and that got her talking about Drake.

Remember how Haddish was in Drake's video for "Nice For What"? Apparently, that's what set their entire relationship off. According to her, after they filmed the video together, they were texting and talking about how excited they were for it when Drake suggested that they hang out. Haddish said she was down, because like she said before — if she's interested, she'll make time. So she did.

"He was like, 'Let me take you to dinner.' I was like, 'That sounds good' and he was like, 'OK, cool, cool we'll make it work,' right? So, I block all this time off. Like, shoot, I'm gonna get my mustache waxed, you know what I'm saying? Get my armpits waxed, got me a nice little dress."

But then, unfortunately, things just didn't pan out when it came time for the date — and Haddish had no idea the date was off until they day they were supposed to get together. Even more unfortunately? Haddish said she lost out on $100,000 she could have made if she was available to work that day, as if missing out on a date she was excited for wasn't enough.

"Then I'm like, 'So, what time we heading out, are you sending a car, like, where we going?' He's like, 'Oh man, my bad, family emergency I'm in Canada right now.' And I was like 'OK! OK!' I could of made a hundred thousand dollars today. But I was trying to see what that D do, but all right, not gonna do that one."

But even though it must have been a bummer to miss out on a date and that kind of cash, it sounds like Haddish took it pretty well. And to be totally fair, Drake did have a good reason for bailing — in fact, a family emergency is probably the best reason for bailing. But maybe, in the future, if something comes up he could try to cancel a little earlier than the day the date's supposed to happen. You know, just so his date can make other plans. Like $100,000 plans.

This date may not have worked out, but who knows what the future holds? Maybe Haddish and Drake will eventually get their date and live happily ever after — or, at the very least, he'll make it up to her for standing her up. This is Tiffany Haddish we're talking about, dude. Don't mess this up.