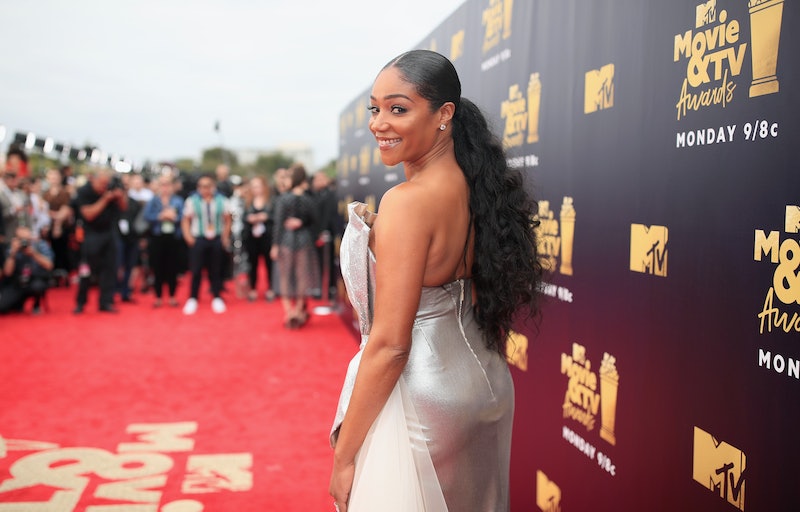 You ready? She ready. If you haven't heard that in the coming weeks, then just know that the host is fully prepared for the MTV Movie and TV awards, and her outfit is proof. Tiffany Haddish wore a full-on ball gown for her very first look of the night. This is only the start of what's sure to be one stylish night for the star.

This woman is not playing when it comes to style. Although the rest of her outfits are under-wraps until she steps on stage, the first one did not disappoint. Haddish walked onto the red carpet wearing silver strapless gown that had a tulle train to end all trains. The host started out with a bang by exposing her entire leg with a thigh-high, strike that, hip-high slit. The outfit screams, "I'm the host" in the best possible way.

The MTV Movie and TV Awards are the time to take a few risks with style, and Haddish is proof. Although the red carpet is slightly less formal than say the Oscars or the even the Grammys, Haddish brought the elegance. She merged the feminine gown with a little bit of edge with the color, structure, and slit. Basically, she took what the show is all about and made it her own.

Silver was the theme of the very first outfit for the star. The entire front of the dress looked like it could live in a museum. It was an elegant way to pull off the summer staple that is the strapless dress. The details continued with the bottom of the bodice.

If you think the bow on the waist is good, just wait until you see the way that Haddish added a little flair to hers. She had almost a half-bow that slightly covered up that hip-high slit. While the look was still completely daring, it made it a whole lot more wearable.

Now let's examine these shoes, because they deserve a closer look. Some people might have added a pop of color or went for something a little less noticeable. But this is not your average awards show host, my friends. Haddish went with the monochrome trend and completely nailed it. Because her entire leg is out, she had to accessorize it with the rest of the dress, which she nailed.

There is a whole lot going on with this outfit. Not just anyone can pull off a completely silver number, so the risk is real. Haddish opted for a slicked-back hairstyle to show it all off. She paired the hair with smokey, heavy eyeliner to add even more edgy to an already edgy look.

Haddish is the first black host of the MTV Movie and TV Awards. That's not the only reason that it's a big night for the star though. She is nominated for Best Comic Performance and Best Scene Stealer for her latest movie Girls Trip. So on top of seeing her host the entire night, she could just be walking the stage to accept and award too.

Haddish will likely step out in tons of other looks throughout the night. Regardless of whatever she decides to wear for her other appearances, this is one heck of a start. It's safe to say that Haddish is not holding back for the awards show.

When you host an award show, you bring it with your looks. Because, let's be honest, all eyes are on you. With risk, an unconventional color, and a whole lot of leg, this is one heck of a start. If the night is anything like this look, it will be bold and definitely worth watching.

After the silver red carpet moment, Hadish wore a long white dress with sheer sleeves for her opening monologue — the first of many changes for the night.

This wasn't even her only white moment — of course, she wore her favorite white dress.

The audience also got a white pantsuit...

... and an white off-the-shoulder moment inspired by Meghan Markle.

Her other color of the evening? Green. We were blessed with two very different emerald looks.

Haddish was also inspired by another famous Tiffany during the Monday night broadcast.

She also wore some gold to be joined on stage by Lady Gaga.