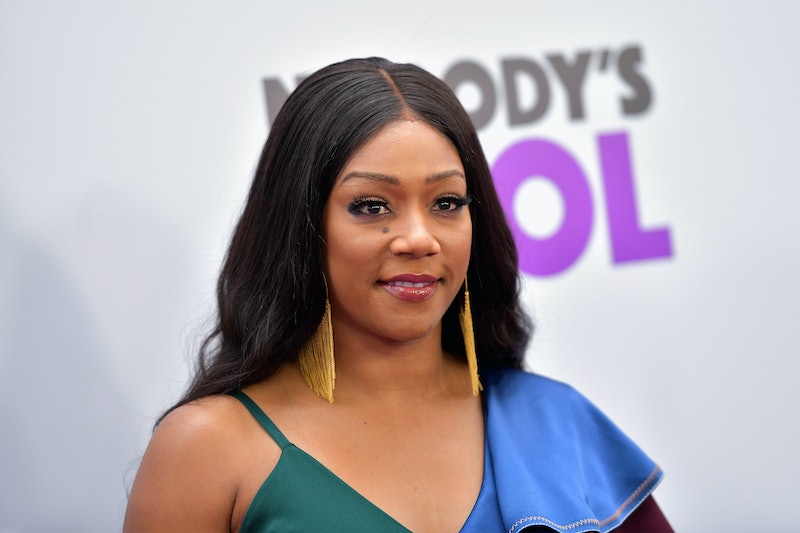 Fans in Miami hoping to ring in the New Year laughing at Tiffany Haddish's jokes were reportedly disappointed when the comedian had an off night. After reports of her set surfaced, Haddish tweeted about her New Year's Eve performance and acknowledged that she wished it had been better. The stand-up comedy set at Miami's James L. Knight Center was the start of Haddish's "She Ready" tour, which has her performing 12 dates over the course of three months. And while her Florida show may not have been the ideal way to start the tour or the New Year, Haddish still seems to be kicking off 2019 with a positive mindset.

Haddish's Miami performance was the only East Coast show of the "She Ready" tour and, as it fell on New Year's Eve, audience members were ready for a good time. But as TMZ reported, Haddish struggled during her set and the crowd became restless. As people began to leave, Haddish addressed the situation and said, "This is weird for me. Now, this is going to be on TMZ or whatever." The Root noted how Haddish ended up cutting the set short and drank with fans who had stayed. On Jan. 1, Haddish shared The Root's article on Twitter and wrote, "Yes this happened. I wish it was better Miami. I prayed on it and I have a strong feeling this will never happened [sic] again."

Even with her superstardom, Haddish has continued to stay true to who she is. So it's not too surprising that she decided to address this less-than-ideal situation honestly on Twitter. And many people have responded to Haddish's tweet with encouraging support since everyone is entitled to an off night. As The Root reported, Haddish had forgotten jokes during the set and even took to reading some off her iPad. Many members of the audience became disruptive, heckling and booing Haddish with people walking out of the show. As a way to criticize Haddish's distracted set, people took to social media and used the hashtag "#SheNotReady."

With her show not being well-received, Haddish chose to get the audience involved. Variety reported that she opened up a bottle of vodka on stage (TMZ reported it was Ciroc, her preferred alcoholic beverage) and invited audience members to come up and tell jokes. Ahead of the set, Haddish had posted on Instagram that she had been partying all night in Miami and promised that her show would be a party to ring in the New Year.

While it seems that Haddish wasn't prepared to do her show, the response has been rather harsh. After all, humans are allowed to make mistakes. But Haddish has faced criticism before and she usually handles it with her trademarked positivity. For instance, when Katt Williams insulted her comedic skills in September, Haddish addressed him on Twitter. "I look forward to seeing you on Monday Katt, when we pick up our Emmys. I just want to shower you with REAL Love cause you need it, and I Love you," she wrote.

For her New Year's Eve performance, it appears that Haddish is taking the whole incident in stride and rightfully not letting it put a damper on the start of the New Year. Her response simply acknowledges that she wishes she had done better for the audience and notes how she doesn't expect a set to go like that ever again. It's this type of humble and respectful response that highlights why Haddish is so beloved. And even though the Miami show could have been better, she's guaranteed to bring people joy and laughter in 2019.

More like this
Who’s The Richest 'Grey’s Anatomy' Star? See The Net Worth Of Each Cast Member
By Hugh McIntyre
Dan Levy Appears In The Latest Teaser For The Weeknd's HBO Series, 'The Idol'
By Jake Viswanath
9 Movies & TV Shows That Prove Stanley Tucci Elevates Everything He’s In
By Jake Viswanath and Radhika Menon
Everything You Need To Know About The 'Knives Out' Sequel
By Bustle Editors
Get Even More From Bustle — Sign Up For The Newsletter