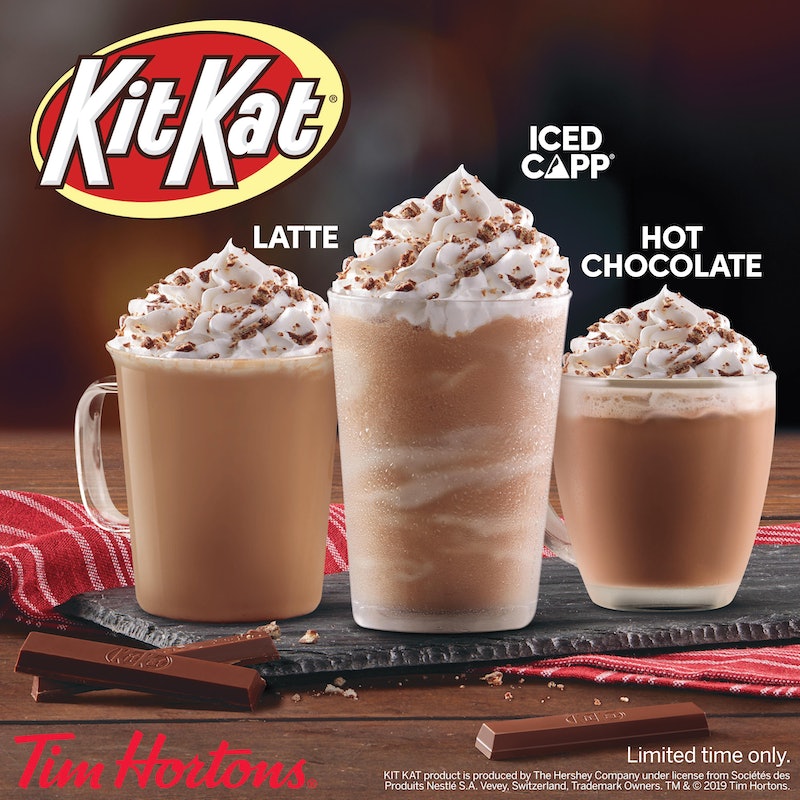 If you’re all pumpkin spiced-out, good news: Tim Hortons has something new on the menu that might provide the perfect break from all that cinnamon and nutmeg. Several somethings, in fact; a whole Kit Kat drink menu has arrived at Tim Hortons. It’s only available for a limited time, of course — all good things must come to an end — but if you go out looking for the new beverage options, y’know, soon, you should be able to indulge your Kit Kat-loving tendencies with ease.

The Toronto-based coffee shop chain is no stranger to collaborations with sweet, chocolatey treats; just this past May, a limited edition Oreo menu arrived, bringing the cookies-and-cream flavor combo to everything from drinks to doughnuts. Interestingly, though, around that same time, a few eagle-eyed customers also began spotting a couple of Kit Kat items in a few places — like this shop in Belleville, Ontario — but the big reveal of the Kit Kat menu has only just occurred. But oh, what a menu it is! With three decadent drinks to choose from, there’s a little something here for everyone — as long as you like chocolate, of course. If that's not your jam, then unfortunately, I... don't really know what to tell you.

First up, there’s the Kit Kat Iced Capp. The Iced Capp is Tim Hortons’ frozen blended coffee drink — basically the Canadian chain’s equivalent to a Starbucks Frappuccino, Dunkin’ Frozen Iced Coffee (which, TBH, will always be a Coffee Coolatta to me), or McDonald’s McCafé Frappé — but this new version gets an extra kick from the inclusion of “chocolate wafer syrup” and a topping of Kit Kat crumbles. If you’re not into frozen coffee, though, rest assured you can get a hot Kit Kat-inspired drink, too; that’s what the Kit Kat Latte is for. Like the Iced Capp, the latte adds chocolate wafer syrup to an existing Tim Horton drink — the regular hot latte, which consists of frothed milk with espresso — and gets a dusting of Kit Kat crumbles on top to finish the whole thing off.

And lastly, there’s something for the non-coffee drinkers in the crowd, as well: Kit Kat Hot Chocolate, which makes an already chocolatey drink even more chocolatey, thanks to the addition of the chocolate wafer syrup that the other two drinks feature. There are more Kit Kat crumbles on top of this option, as well.

Kit Kats have a much longer history than you might think. According to Mental Floss, the name “kit kat” has been in use since the late 17th century — but not in reference to a candy bar; rather, it was the name of a London-based “gathering of Whig party supporters and literary minds” who met at a pie shop on Shire Lane owned by Christopher Catling. Catling’s pies were often referred to as kit cats — a play on his name (“Kit” being a nickname for Christopher).

Confectionery owner Joseph Rowantree later registered “Kit Kat” and “Kit Cat” in 1911, although Rowantree’s didn’t produce its first candy using the name until the 1920s. The Kit Kat as we know it today — the chocolate-covered wafer known for its breakability — came into being around 1935, when Rowantree’s Chocolate Crisp bar debuted. And now? The Kit Kat is a global phenomenon, with countries all over the world putting their own unique spins on the treat with a great degree of regularity. (You have not lived until you've had at least one Kit Kat flavor that's only available in Japan.)

There actually is a Kit Kat factory in Canada — it’s located in Toronto, which, incidentally, is also where Tim Hortons HQ is — so, beyond the Kit Kat’s popular appeal, it makes a certain amount of sense that a Canadian staple like Tim Hortons would feature Kit Kats on its menu from time to time; happily, though, Tim Hortons also exists in places outside of Canada these days, so those of us elsewhere will be able to enjoy these new treats as well. Look for them for a limited time at your local Tim Hortons store, which you can find using this store locator. Enjoy!

More like this
I Tried The $20 TikTok Viral Oishii Strawberries — Here's What I Thought
By Sophie Hanson
On TikTok, A ‘Snackle Box’ Is The Best Way To Pack Charcuterie On-The-Go
By Meguire Hennes
TikTok Is In Its Elle Woods Era
By Meguire Hennes
13 Selfie Instagram Caption Ideas That Exude Main Character Energy
By Jessica Booth and Emma Carey
Get Even More From Bustle — Sign Up For The Newsletter