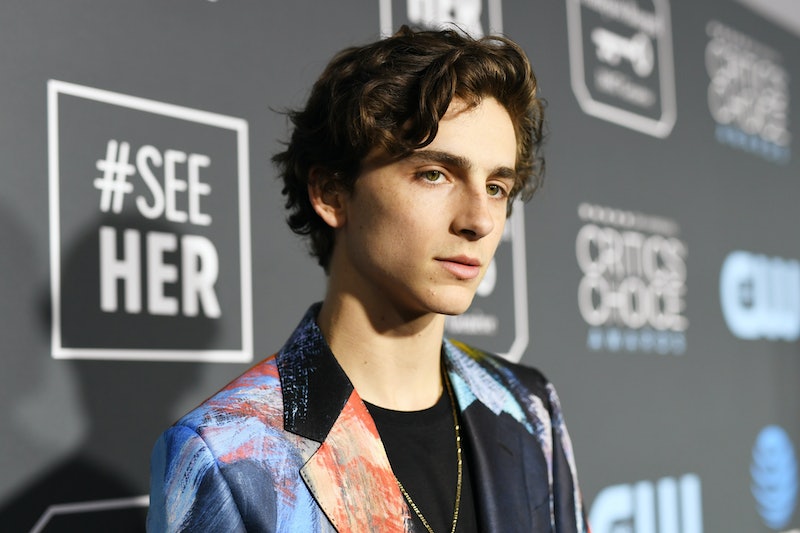 As he walks the red carpet at the SAG Awards on Sunday, Jan. 27, with his usual impeccable fashion sense, the masses will undoubtedly want to know: who is Timothée Chalamet dating in 2019? Yes, the internet's boyfriend is someone's actual boyfriend, sorry to report to all the Chalamaniacs out there.

Rumors emerged in early October 2018 that Chalamet and Lily-Rose Depp were dating. (Depp, the daughter of Johnny Depp and French model-turned-actress Vanessa Paradis, is herself a model-turned actress, having made her film debut in Kevin Smith's 2014 film Tusk.) As People reported at the time, the pair were captured on social media strolling through Central Park and getting coffee together, leading to speculation of romance. Later that month, the photogenic couple seemingly "confirmed" the speculation when they were photographed kissing on the street after a dinner date in the East Village, as reported by E! News.

A few days after Christmas, the couple was spotted by Us Weekly on a holiday trip in Paris; and while there's been no official word on the status of Chalamet's and Depp's relationship in the few weeks since, we also don't have any confirmation they're no longer together in 2019.

But where did the Oscar-nominated star of Call Me By Your Name and the Tusk actress meet? Presumably the pair first crossed paths while filming The King, an upcoming Netflix original film co-written and directed by David Michôd (Animal Kingdom), and adapted from several of Shakespeare's historical plays. Chalamet stars in the film as Prince Hal, the future King Henry V — a role that previously earned a young Kenneth Branagh his first Oscar nomination in 1989, and is already garnering buzz for Chalamet's second nomination at the ripe old age of 23.

The King isn't the only exciting project Chalamet has lined up, either. Also in 2019, he will reunite with his Lady Bird director Greta Gerwig and co-star Saoirse Ronan for the new adaptation of Little Women, in which he'll appear with Emma Watson, Eliza Scanlen (Sharp Objects), Laura Dern, and Meryl Streep. He was also recently cast in Wes Anderson's next film, The French Dispatch, in which he'll again co-star with Saoirse Ronan, alongside a rogue's gallery of famous actors including Frances McDormand, Bill Murray, Tilda Swinton, Willem Dafoe, and Kate Winslet. Finally, he'll headline the new adaptation of sci-fi classic Dune by Oscar nominee Denis Villeneuve (Arrival) as Paul Atreides, the messianic savior of the desert planet Arrakis.

But before any of that, Chalamet is once again up for another major award, nominated for Best Supporting Actor by the Screen Actors Guild for his acclaimed performance in the real-life addiction story Beautiful Boy. While that recognition didn't translate into a second Oscar nomination — his slot among the SAG five was taken at the Academy Awards by Vice's Sam Rockwell — it's certainly only a matter of time before he wins his first little gold man, judging by that impressive slate of upcoming projects.

Many a Chalamaniac may hope to be on his arm when he does; but sorry ladies (and gentlemen)… that spot is already taken.

More like this
Blake Lively & Ryan Reynolds’ Relationship Timeline Includes 4 Baby Bumps
By Jake Viswanath
An Extremely Messy Ranking Of What Actually Happens In 'Don't Worry Darling'
By Chloe Foussianes
Paul Mescal, Man Of Mystery
By Samantha Leach and Heather Hazzan
Florence Pugh Reflected On Her ‘Don’t Worry Darling’ Experience On Opening Day
By Brad Witter
Get Even More From Bustle — Sign Up For The Newsletter