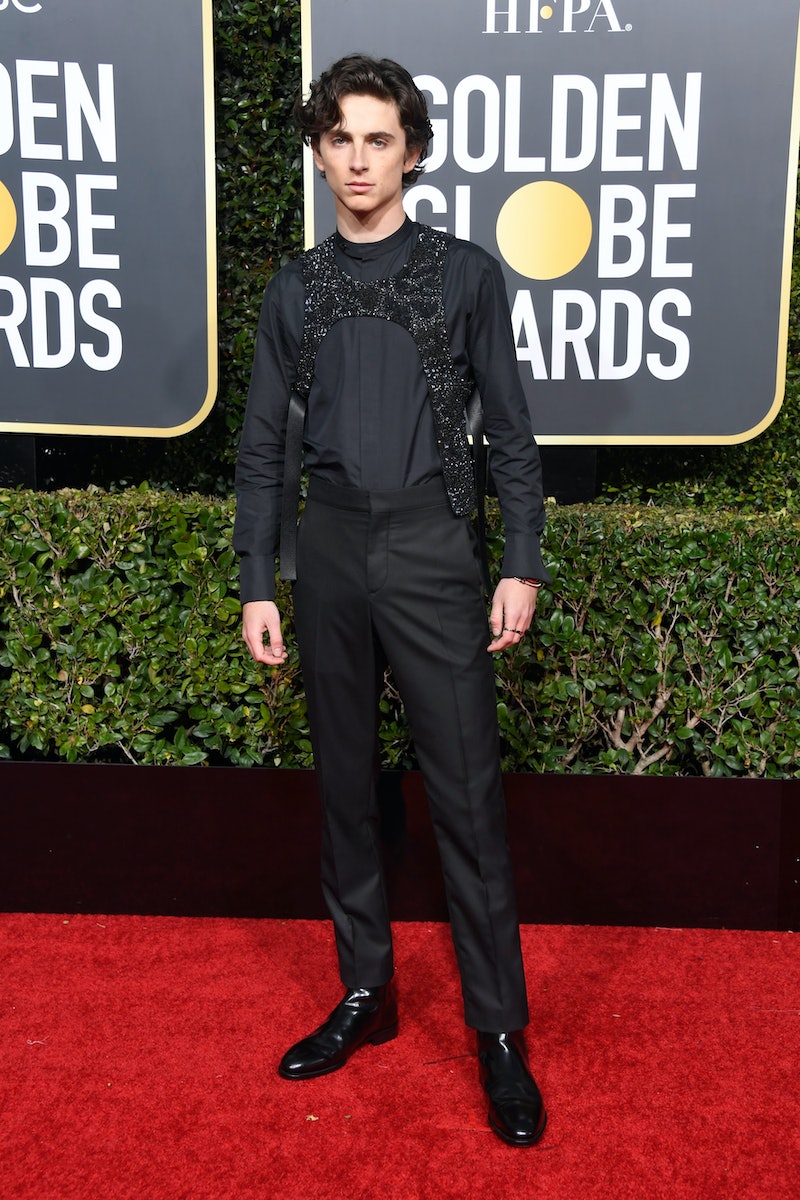 Timothée Chalamet has managed to become an awards season favorite in just a matter of a couple years. Yet, he's no Meryl Streep just yet since Chalamet wasn't nominated for the 2019 Oscars. Chalamet had been expected to receive a Best Supporting Actor nom for his performance in Beautiful Boy. But when the nominations were announced on Jan. 22, Chalamet was missing from the category. Instead, Mahershala Ali for Green Book, Adam Driver for BlacKkKlansman, Sam Elliott for A Star Is Born, Richard E. Grant for Can You Ever Forgive Me?, and Sam Rockwell for Vice make up the Best Supporting Actor category at the 2019 Academy Awards. And while there are plenty of worthy performances being acknowledged, some fans on the internet couldn't believe Chalamet was left out.

For the 2018 Oscars, Chalamet was pretty much a shoo-in for a Best Actor nomination for Call Me by Your Name. Although he lost to Gary Oldman for his performance as Winston Churchill in Darkest Hour, Chalamet was at least recognized by the Academy of Motion Picture Arts and Sciences for his role of Elio.

But that's not the case for the 2019 Oscars since Chalamet was not included in the Best Supporting Actor category — and fans are displeased to say the least.

In the biographical Beautiful Boy, Chalamet struggled with drug addiction as he portrayed the real-life Nic Sheff. The movie follows the efforts of his father (Steve Carell as David Sheff) to help his son achieve sobriety. As one fan noted on Twitter, Chalamet was nominated for a Critics' Choice award, a Golden Globe, a Screen Actors Guild (SAG) award, and a British Academy of Film and Television Arts (BAFTA) award for his heartbreaking performance in Beautiful Boy. But an Oscar nomination eluded him, which drew comparisons to Daniel Brühl for his role in the 2014 auto-racing movie Rush.

As for the other nominees, some were very deserved and to be expected. Like Ali for Green Book, who won over Chalamet at the Golden Globes and the Critics' Choice. But Chalamaniacs seemed to be the most angered by the fact that two Sams got the nomination over the 23-year-old beloved actor. Veteran actor Elliot earned his first nomination as Bradley Cooper's manager and older brother Bobby Maine for A Star Is Born. And the reigning Best Supporting Actor winner, Rockwell, received back-to-back nominations thanks to his interpretation of George W. Bush in the divisive Vice. (Although his winning role in Three Billboards Outside Ebbing, Missouri, was more controversial.) Chalamet fans were particularly disappointed by these nominations since they believe Chalamet gave the meatier performance (no chicken wings reference intended).

If Chalamet had been nominated and won Best Supporting Actor, Gold Derby figured out he would have been the second youngest winner ever. He also was the youngest Best Actor nominee since 1944 when he was nominated for Call Me by Your Name in 2018. So even though he wasn't nominated for Beautiful Boy, which received a grand total of zero nominations, Chalamet clearly has a long, award-worthy career ahead of him — and fans can hopefully take solace in that.