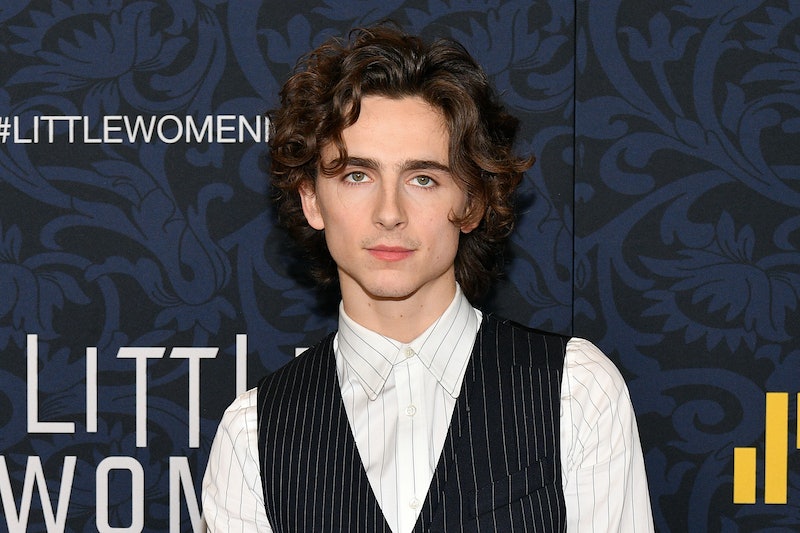 Timothée Chalamet's dinner with Kanye West sounds stressful. But, he prefers to call it "surreal." On the Dec. 9 episode of The Tonight Show, fans finally got the story behind Chalamet's viral dinner party with Kanye, Pete Davidson, and Kid Cudi straight from Chalamet himself. Turns out, stars really are like us.

Earlier this year, Kim Kardashian posted photos of Chalamet hanging out with Davidson, Cudi, and West to social media, and the internet nearly broke. People immediately wanted to know more about one particular snapshot in which a hoodie wearing Chalamet is flashing a peace sign like it's NBD. Apparently, that couldn't be further from the truth.

"So Kid Cudi is my favorite artist ever, I wouldn't be acting without him," Chalamet told Tonight Show host Jimmy Fallon. So, when he texted Cudi for his birthday and the rapper invited him to his celebratory dinner at swanky sushi spot Nobu, he just had to go. "I did not know that's what I was walking into," Chalamet said of that now infamous gathering

He assumed they'd eat and drink and be merry, but then Cudi's buddy and longtime collaborator Kanye showed up. When Ye and Kim K unexpectedly arrived at the restaurant, it was like an "earthquake hit the restaurant," according to the Little Women star. "I had to go to the bathroom and send a couple of texts," he admitted because he "felt like a fraud."

While Chalamet is a big star himself, he revealed that he still gets nervous around his idols. "I'm like trying to have a good time," he said of hanging out with someone like West, but he often worries he's "coming off weird. Like right now," he joked.

Luckily, the friends he texted put him in his place. "They were like, he remembered, "'Man, 16-year-old you would slap the sh*t out of you. Go back to the table.'"

Chalamet's recollection of that viral meal is just another piece of the surreal puzzle that was that night. Davidson revealed to Fallon back in April, that he was the one footing the bill for his friend Cudi's birthday. While he was excited to party with the Wests, who he called "the cutest couple," he said things got expensive real quick.

"So they come by, and we're outside, right, and then Kanye goes, 'Let's get the special room in the back.' And I was like, 'oh no!' I was like, 'Yeah, all right! Cool! Sick!'" Davidson said. "So we're sitting in there, and I'm texting my touring agent, and I'm like, 'We gotta book more shows.'"

Hopefully, that means these guys will be booking more dinners, too. But photos or it didn't happen.