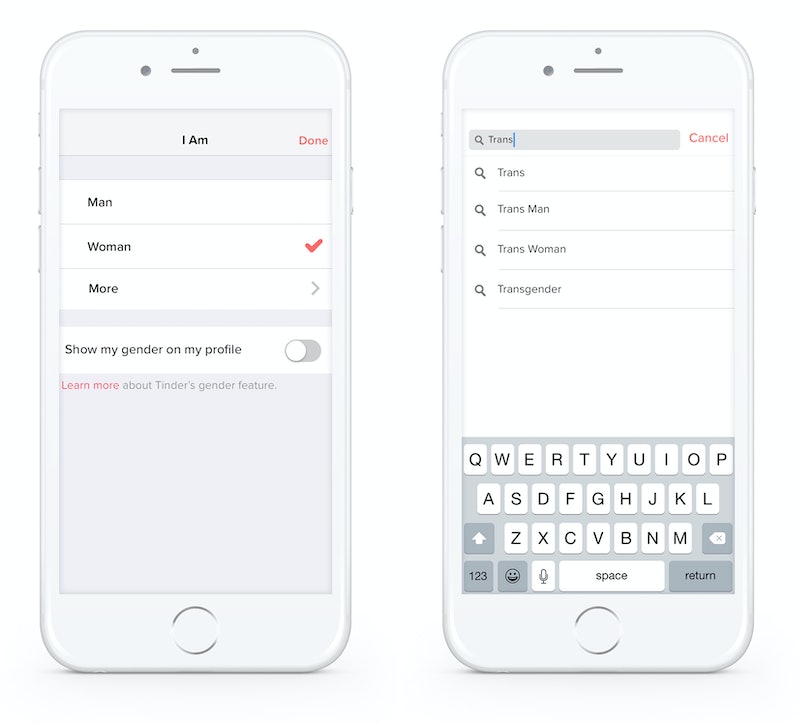 In 2018, there exist dozens of different identity terms to define our individual genders and sexual orientations — and yet, some dating apps seem to have gotten tangled up in a two-gender trap, leaving behind countless could-be users who don't fit neatly into "male" and "female" boxes. How the heck are we supposed to find love or even just casual sex if we aren't allowed the vocabulary to accurately express ourselves?

Enter Tinder, which aimed to expand the dating pool with the launch of its "More Genders" feature in 2017. The decision to get with the times has paid off: On Thursday, the app announced that "More Genders" has made 25 million matches worldwide — and counting. So many more fish in the sea when you break with the normative gender dichotomy.

"As the world's most popular app for meeting new people, with the most diverse user base, we wanted to learn how to be a better ally to the transgender and gender non-conforming communities, and become a driving force to help create a more inclusive and accepting digital world," a Tinder spokesperson tells Bustle. "We want our users, regardless of how they identify, to feel empowered to express themselves on Tinder."

Although it’s only been 12 months since its global expansion, "More Genders" has been in the works since November 2016. As Tinder Founder & Chairman Sean Rad told Time, the decision came after the company heard word of rampant gender-based discrimination taking place on its platform: Users would report matches after discovering their gender identity, flagging profiles as fraudulent when a person who'd selected "woman," for example, clarified in their bio that they actually identified as genderqueer, or as a trans woman.

"Once we found out," Rad told Time, “we knew we had to make a change. Because we’re really committed to making sure Tinder is a place for everyone. We will do everything we can to make sure Tinder is a safe place."

Tinder called in advocates and activists with GLAAD, Inter-LGBT, Transgender Europe, FELGBT, dgti, and Transgender Victoria to update its interface: When setting up their profiles, users could now click man, woman, or the "more" tab under the "I Am" dropdown menu. There, they'd find nearly 40 (for U.S. users) options they could tailor to their particular identity: Enter "trans," for example, and you can select "trans," "transgender," "trans man," "trans woman," and so forth. According to the Tinder spokesperson, "A user can type in any gender that best reflects their gender identity," or choose from a list of auto-fill options that vary by region. The feature originally launched in the United States and in a handful of other countries — Spain, France, Germany, the U.K., and Canada — and is now available in Australia as well.

In a press release touting the 25 million match mark, Tinder included the top 15 cities for More Genders success. If you're looking for love online and would like to weed out bigoted jerks, it seems likely you might have the most success in:

No city is completely devoid of jerks, though. In line with its self-described "zero tolerance policy on harassment," Tinder has a protocol in place for users looking to report misconduct. If someone abuses you through Tinder, verbally or otherwise, click the three dots icon at the top right of their profile and choose "Report" from the pop-up menu. Or, in the case that the someone gets you blocked before you have a chance to execute this procedure, email help@gotinder.com. As a rule, it always helps to screenshot inappropriate behavior.

In any case, 25 million matches — an impressive milestone for a first anniversary.