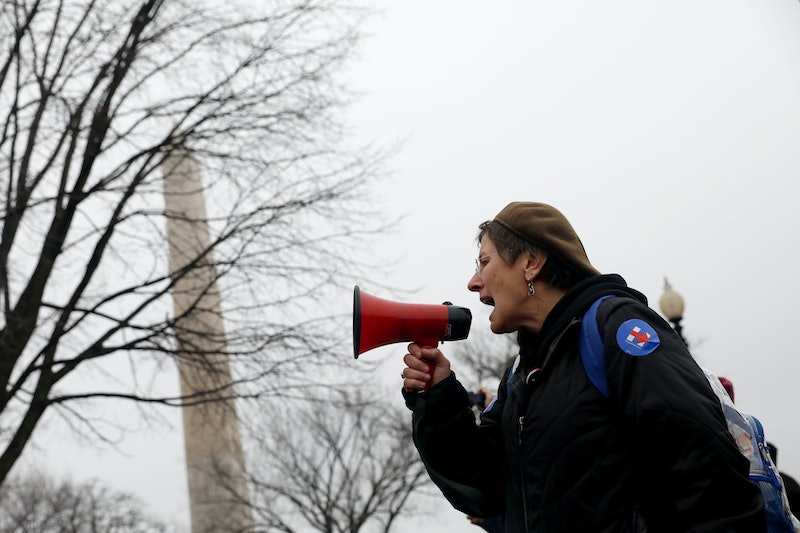 This year, male feminists cropped up everywhere in T-shirts and Facebook posts telling us just how much they care about women's rights. Last January, many joined the women in their lives at the Women's March on Washington. And after Harvey Weinstein's downfall, they labeled his alleged behavior a disgusting abuse of power. Going into 2018, however, there's still a lot of work to be done around women's issues, so male feminists should note what women actually need from them.

Celebrity male feminists have become a kind of societal barometer for what other men should (or shouldn't do). But putting on a woke T-shirt does not a real feminist make, nor does adding "feminist" to your Twitter bio. Don't get me wrong — it's great that some men are labeling themselves feminists and speaking out about women's rights. But the first lesson male feminists have to learn is to listen to women and let us do the talking for a change.

Here are a few suggestions for male feminists who genuinely want to make the world a safer place for women.

Women are interrupted by men at work, at the bar, at dinner parties — pretty much in any scenario that involves talking. Even if you don't think you interrupt women, you could be doing it without realizing.

Pay close attention to your conversations, and apologize if you start to interrupt someone's thought.

Male dominance is so internalized that it can be tricky to make your language less gendered — I sometimes catch myself saying someone is "bitching" about a problem, and then remind myself internally that a word used to describe women shouldn't be synonymous with complaining.

Think about how you talk about women, and whether or not you would talk about a man in the same way. Calling women emotional, needy, crazy, hysterical, frigid, or bossy all perpetuate harmful feminine stereotypes. Respect your female coworkers' opinions, and respect your female friends and family members' feelings by removing certain words from your vocabulary.

It's vital that men hold other men accountable. It's one thing to join discussions about Weinstein's tenure in Hollywood, and another to actively call out men who are acting inappropriately.

If your friend makes a rape joke, tell them violence against women isn't funny. If you see someone bothering a woman at the bar or on the street, ask if she's okay and intervene (or call the police) if necessary. If you recognize that a male coworker belittles a female coworker or takes credit for her ideas, stand up for her. What men say in private usually indicates how they treat women in real life, so don't brush it off as "locker room talk." And because women often don't feel safe enough to confront men, a male ally stepping in can make a huge difference.

Holding men accountable also requires believing women. All that means is not assuming a woman is lying or exaggerating when she says she's been assaulted or harassed. Listen to her, be gentle with her, and help her hold the responsible man accountable if that's what she wants.

Tell Female Coworkers What You Make

By some estimates, the gender wage gap won't close for 100 years if it continues narrowing at the current rate. Part of the problem is that women don't know how much their male counterparts make, and thus don't realize they're making less. Privately telling women you work with how much you're paid is a simple step most men can take toward achieving equal pay.

Having equal representation in politics is key to protecting women's rights and enacting policies that benefit women. More women than ever are running for Congress in 2018, but it will take a lot of work to get them in office.

Donate your time and money to women's campaigns that advocate for policies you agree with, encourage women you know to run for local office, and get your friends and family on board to vote for women in 2018.

Even feminist men often don't realize the amount of emotional and physical labor done by female partners or family members. If you live with a female partner or roommate, have a discussion about who does what around the house — and most importantly, make sure the division of labor is equal and the tasks aren't divided by gender stereotypes. Women having to ask a male partner to tidy up or help with chores is extra work, so pick up your dirty clothes and clean the bathroom when you notice it's looking dirty.

If you don't live with women, keep in mind that the same dynamics exist when you go home or see family. Cooking and cleaning after a family dinner shouldn't be left to the women while the men watch TV in the other room.

Performative male feminism accomplishes nothing, so check your privilege at the door and help women in tangible ways going into 2018.