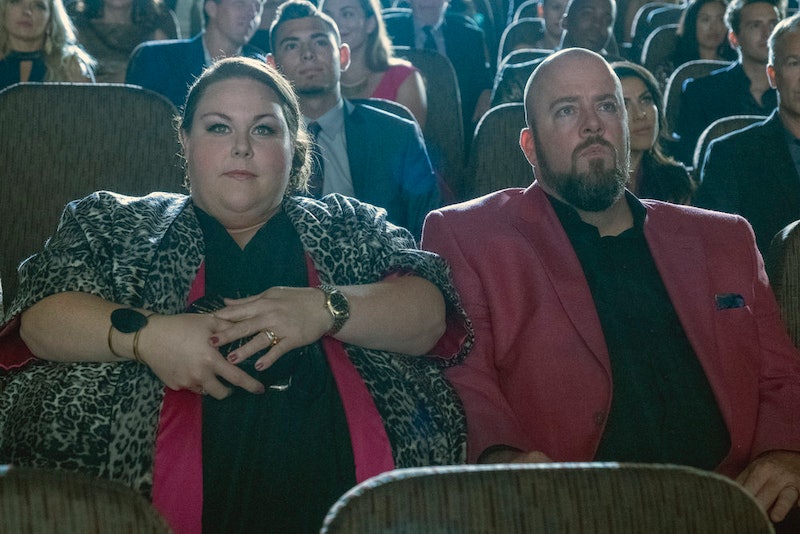 Two episodes have passed since the This Is Us Season 3 premiere, and the show has yet to return to the "Her" mystery. Of course, that doesn't mean fans have stopped speculating about Toby's missing wedding ring in the premiere's flashforward. His lack of a ring left fans with a whole lot of questions, including: Are Kate and Toby divorced? Is Kate "her"? Is Kate even still alive in the future? In a new interview with Entertainment Weekly, This Is Us executive producers Isaac Aptaker, Elizabeth Berger, and Dan Fogelman didn't elaborate on exactly when the show will return to the future timeline, but they did reveal that This Is Us fans are noticing the right things.

Her words hint that fans are on the right track by latching on to the missing ring. Toby's lack of a wedding ring, along with his reluctance to join Randall and Tess because "she" may not want him there, is definitely significant. Fogelman added to Berger's comments, "We don't do anything unintentionally." Duly noted, Fogelman. But were there any other clues hidden in the season premiere's future-set scene? Fans have speculated that Toby is in an institution of some sort, while others noted that the poster on his wall is the same one currently hanging in the room he shares with Kate in the present.

Again, Fogelman believes in the fans' ability to find the most important details in the future scenes. He explained to EW,

"We break these stories very thoroughly and far in advance, so there are things happening that fall back upon themselves or are little pieces attached to something else that you may not even realize. Nothing is done haphazardly. People may not love every single decision that is made but the decisions are made carefully. I don’t think people read into things too much — I think they’re reading into things the proper amount."

Given how major Toby and Kate's storyline in Season 3 has been so far, it stands to reason that the decisions that they're making right now will influence their future in a major way. Those decisions include Toby going off of his depression medication, and their IVF journey. It still remains to be seen how these things will lead to Toby seemingly living alone and no longer wearing his wedding ring, but it likely won't be too long before fans get answers.

Unlike the mystery of Jack's death, the show's executive producers are promising that the answer to who "her" is will be coming at some point this season. One thing fans should keep in mind is that the future storyline appears to be much bigger than just figuring out who the Pearson family is so nervous to see. Fogelman previously told EW that this timeline is as far in the future as the show intends to go, which in turn, means that every future clue is part of the endgame.

Fogelman elaborated on this idea during his interview with EW. He said,

"You showed Toby is alive — he seems different, Kate’s not in the bed with him — so even showing that Toby’s okay creates new questions. Where is Kate? Is it Kate who is ‘her’? Where is she is and is she okay? Are they still together? Anybody we reveal is going to also land some other questions: How are they in this place? What are they doing in this place? Who else is there? Why is that person not there? All those questions will be answered. And then, in the future, it will be a matter of the show exploring from how we got from here to there."

Toby's lack of a wedding ring is definitely a clue, but it's part of a much larger picture that's just beginning to come together. The Pearson family is heading toward some sort of critical moment in their future, but it's important to pay attention to all of the smaller breadcrumbs being dropped along the way, like the fate of Toby and Kate's marriage — whatever that may be. On This Is Us, everything matters, and that just gives fans even more of a reason to keep those theories coming.