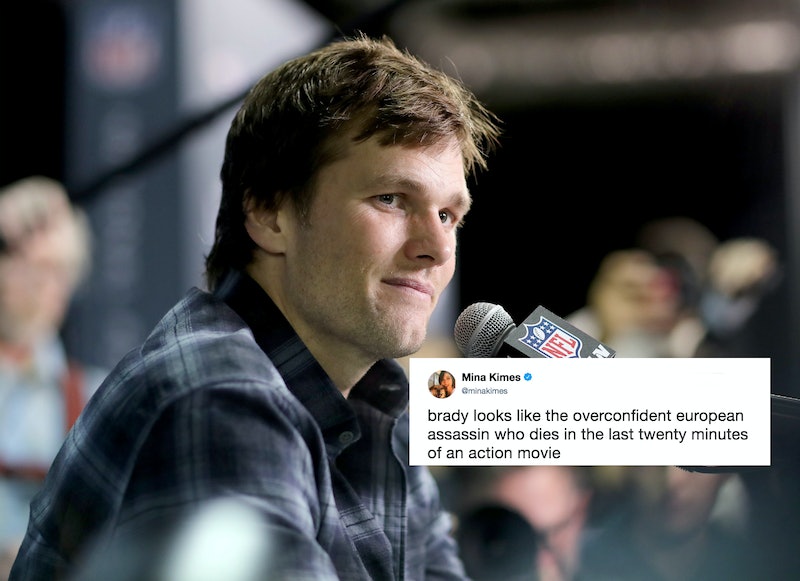 Tom Brady is undoubtedly one of the most noted — and polarizing — names in football history. Whether you love him or hate him, the New England Patriots quarterback has become notorious for many things, from unabashed confidence to deflated footballs to a close relationship with President Trump. In recent years, Brady's fashion sense has become equally as infamous as the man himself. Whether it's Super Bowl Sunday or not, the internet doesn't sleep on its contempt for Brady — or his sometimes questionable fashion choice. Brady's 2018 Super Bowl pre-game outfit certainly got Twitter chatting, and the memes are everything your Sunday night football party needs.

Brady rolled up to U.S. Bank Stadium in Minneapolis, Minnesota wearing a double-breasted gray coat, black turtleneck, and black sunglasses. The look was topped off with white headphones and a popped collar, which turned America's most discussed quarterback into a dead ringer for the Secret Service. Brady's pre-game outfit was polished, high fashion, and incredibly out-of-place amongst the sea of sweatshirts and jeans behind the scenes of football's biggest night.

Yes, it was stylish. You can't argue that. But it was also plain strange given the context.

Twitter quickly took note of the bold look, and quickly gave life to the most incredible Super Bowl LII memes before the players even hit the field. With just one outfit from Brady, the Super Bowl was kicked off in the most hilarious way possible. Just take a look at the cheeky chaos for yourself.

I mean, she isn't wrong. The "overconfident" part certainly isn't anything new for the Patriots player. But European assassin? Well, that's a fresh career choice for Brady once retirement comes through.

That infamous Brady self-assurance paired with this sleek outfit just screams divorcee courtroom victory to some Twitter users. Don't you even think of messing with HBIC. You'll get burned for sure.

We finally know Tom's style secrets. He must have a whole Pinterest board full of First Lady fashion inspo. It makes so much sense.

This is the look of a guy who knows he's the least popular dude in the locker room. But at least he knows it.

“You know those days when you get the mean reds?”

Now we know what's blasting in those Secret Service-like headphones. Get ready for that beat drop, Brady.

Well, he's evolved into a real life villain for many, so this isn't too far of a stretch.

I can't believe we didn't notice this absolute fact until right now. I swear you can see one giggling somewhere in that mass of coat.

Well, this is oddly specific ... and strangely accurate?

The Zoolander vibes are so, so strong. Just wait until he takes off those sunglasses and hits you with the famous Blue Steel look.

Basically everyone thought Brady looked like that infamous overbearing mother, which isn't too far off base.

Speaking of infamous overbearing moms, the Kris Jenner comparisons were aplenty with this sartorial choice. Because of course they were.

Tom, do you choose the red pill or the blue pill?

Whether you love him or you hate him, Brady is without a doubt an athletic anomaly and a surprisingly sharp dresser. And, believe me, he knows it. But when you have everything in the world going for you like Tom Brady does, at least you can count on ruthless memes to help keep you humble. Even on one of the biggest nights of your career.