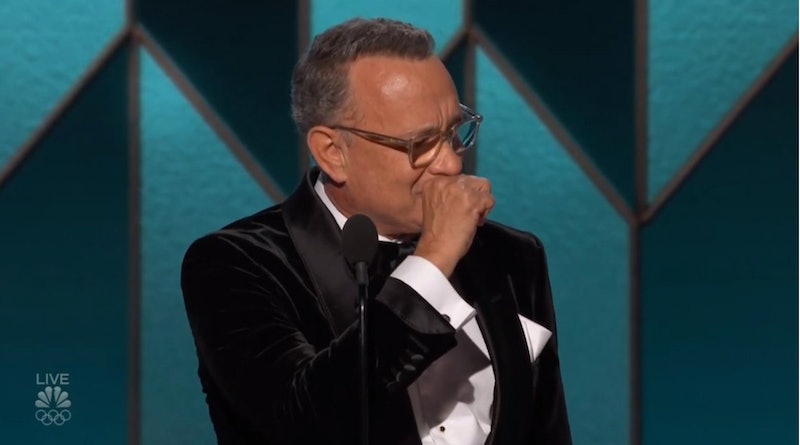 At the Golden Globes on Sunday night, Tom Hanks accepted the Cecil B. deMille Award for outstanding contributions to the world of entertainment. His emotional acceptance speech was a dedication to the film industry, but also to the family that made his career possible. He was moved to tears while paying tribute to his wife, the actor Rita Wilson. And alongside him, so was Twitter.

"A man is…" he started, before choking up. "A man is blessed with a family sitting down front like that. A wife who is fantastic, who has taught me what love is. Five kids who are braver and stronger and wiser than their old man is. And a loving group of people who have put [up] with me being away months and months at a time. Of course I wouldn’t be standing here if they didn’t have to put up with that. I can’t tell you how much your love means to me."

His speech continued with characteristic affection for the industry that's been his home since he moved to New York to become an actor at 23, but also words of advice that resonate beyond film. He said "showing up time is one of the greatest liberating acts you can give yourself in a movie" — a call for actors to avoid waiting to be fetched to come to set. He spoke of taking personal responsibility and pride in the work he was making, a lesson he learned as a young actor.

Still, he admitted to being flabbergasted at receiving the Cecil B. deMille award in the first place. “Most of the people in this room, I would pay to see them get their cars washed. So to be up here… and can I just say honestly? Really?”

When the A Beautiful Day in the Neighborhood star's emotions overcame him as the speech came to a close, he joked, through stifled tears, "It's the cold that's making this happen. I swear to God I'm not nearly this emotional at home."