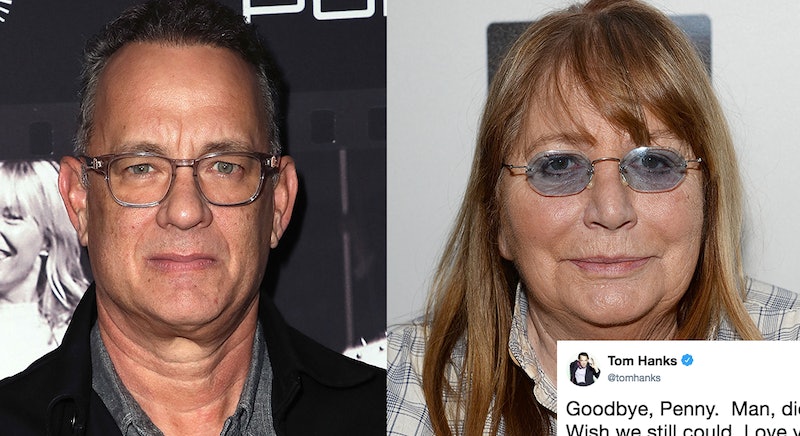 There may be no crying in baseball, but there sure is crying at heartfelt social media posts. Tom Hanks's tweet about Penny Marshall in the wake of her devastating passing is a tremendously sweet note, a heartbreaking message for someone who played a major role in his life. Shortly after news of Marshall's death broke on Tuesday, Hanks tweeted,

“Goodbye, Penny. Man, did we laugh a lot! Wish we still could. Love you. Hanx.”

Marshall passed away on Monday, Dec. 17. In a statement to the Associated Press from her publicist Michelle Bega, Marshall’s family said, “Our family is heartbroken.” Bega confirmed Marshall died due to complications from diabetes.

Marshall and Hanks first worked together on Big, the 1988 comedy about a preteen boy who makes a wish an arcade one night, and wakes up the following morning a 30-year-old adult. The film was a, well, big deal. Hanks’s performance earned him his very first Oscar nomination and his very first Golden Globe win. Moreover, the movie was the first feature film directed by a woman to make over $100 million. Oh, and the movie also might've invented the song “Chopsticks,” enormous keyboard mats, and FAO Schwarz.

It is nearly impossible to imagine anyone else as 30-year-old Josh Baskin, but it almost happened. As Marshall told the Washington Post in 1988, she originally wanted Robert De Niro to play the part. Furthermore, before Big became her movie, it going to be a Steven Spielberg flick starring Harrison Ford. But the role went to Hanks instead, and the rest is history.

The pair teamed up again for 1992’s A League of Their Own, a fictional story about the All-American Girls Professional Baseball League, the women’s baseball league that came to be during World War II. And like Big, A League of Their Own brought in over $100 million at the box office. Oh, and the movie might've invented peaches, baseball, and doing the splits. It is one of the best sports movies ever made, full stop.

Tom Hanks’s son Colin Hanks also posted a tribute to Marshall on social media on Tuesday. Along with a picture of the cursive L that was stitched to all of Laverne DeFazio’s tops, Colin wrote,

“She was as bada** as you hope she would be and just as kind. Razor sharp wit but with a delivery that was...well, ya know, Perfect. She was also the only other adult, aside from Lori Petty, who understood just how bad I wanted that pair of Air Jordans I was saving up for the summer of 91. Rest in Peace Penny.”

The image of Young Colin Hanks chatting with Marshall and A League Of Their Own actor Lori Petty about Air Jordans in the early '90s is so, so good. What an incredibly endearing (and wonderfully specific!) memory.

Marshall's impact on television and movies cannot be overstated, and it is evident she made an impact on those who were fortunate enough to know her and work with her.