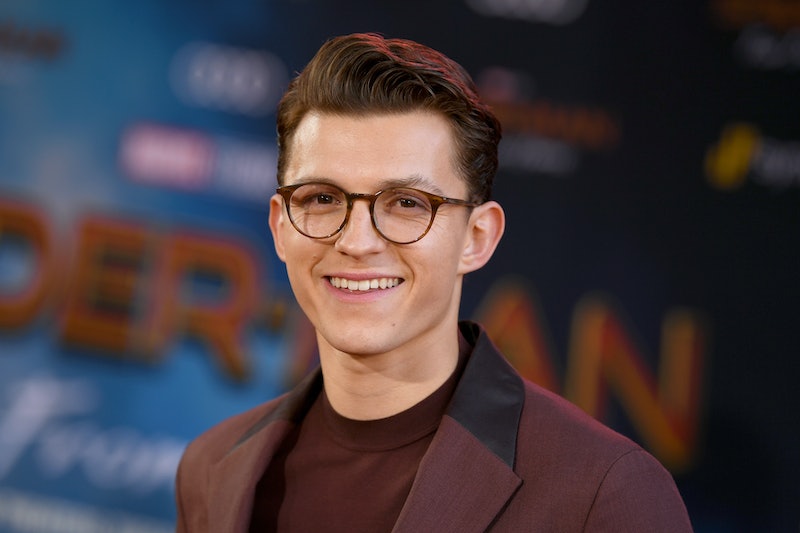 Peter Parker might be off the market in real life. According to photos obtained by TMZ, Tom Holland may be dating someone new. Of course, Spider-Man fans are reacting strongly on Twitter, because, well the news is apparently a lot to handle. It's important to note that nothing has been confirmed regarding their relationship status. Holland also hasn't made any sort of comment.

As you can see in TMZ's pictures, the Spider-Man: Far From Home star was seen with a mystery blonde woman. The two were photographed holding hands and appearing super cozy at British Summer Time Hyde Park Festival in London on July 14. According to TMZ insiders, Holland and the woman watched The Black Eyed Peas and Robbie Williams perform. It seems like they had a good time, because they are smiling and laughing a lot in the photos.

However, it's worth noting that in a June interview with ELLE, Holland commented on his relationship status. He said that he was single at the moment in time, but is "definitely a relationship person." Of course, Holland's status could've have changed since his chat with the publication.

Let's be clear that the woman could be simply be a friend, not a girlfriend. That said, the two could be dating casually or maybe even seriously. Really, it doesn't matter. Holland is a human being who is, of course, allowed to date and doesn't need permission from anyone to do so. Nor does Holland owe anyone an explanation or a statement on his love life.

Whatever is happening with the 23-year-old and anonymous woman, there's no denying she's super cute. If they are dating or whatever is going on between them, they look adorable together. Also, does anyone else appreciate that they're wearing somewhat matching outfits? Total couple goals, you know, if they are a couple. As for fans, well, listed below are the range of tweets being published thanks to TMZ's report.

Fans Wanted It To Be Them

There are a lot of feelings here.

He Can Actually Keep A Secret

As fans know, Holland isn't great at keeping secrets when it comes to Marvel movies. He didn't even get the Avengers: Endgame script prior to filming in fear that he would open his mouth. Director Joe Russo said during the April Indian Anthem event, "Yeah, Tom Holland does not get the script. Tom Holland gets his lines and that’s it." Russo continued, "He doesn’t even know who he’s acting opposite of. We’ll just, we use like very vague terms to describe to him what is happening in the scene, because he has a very difficult time keeping his mouth shut."

So fans definitely are shocked to see that Holland kept this mystery woman a secret, you know, if they've actually been dating for awhile.

So Many Zendaya Tweets — Of Course

First, the last tweet is important. Secondly, there have been rumors forever that Holland and his Spider-Man costar, Zendaya, are dating. Both she and Holland have repeatedly denied the dating rumors. In interview with ET Canada shared on June 20, the Far From Home costars reflected on the constant romance reports. Zendaya admitted that it "comes with the territory" of their celebrity lifestyle. Holland called it "a little annoying."

Zendaya also told Variety in 2017 about her relationship status with Holland, "We are friends. He’s a great dude. He’s literally one of my best friends. This past how many months we’ve had to do press tours together. There’s very few people that will understand what that’s like at 20 years old."

Congratulations Are In Order

Some people are truly happy for Holland.

Unfortunately, there are many individuals speaking negatively about the mystery woman, which isn't OK. She deserves nothing but respect. So many details are unknown regarding their relationship and it's completely unfair to attack her.

Whether or not Holland is dating this particular person, let's send him love and support. All that matters is he's living his best life and is happy in the process.

More like this
Selena Gomez Confirms She's Single Amid Drew Taggart Dating Rumors
By Martha Sorren, Jake Viswanath and Jack Irvin
Everything You Need To Know About Kanye's Post-Kardashian Dating Life
By Bustle Editors
Who Is Pete Davidson Dating? He & Chase Sui Wonders Got Caught Kissing
By Jake Viswanath
Darren Harriott Is Keeping His Love Life Away From The Spotlight
By Darshita Goyal
Get Even More From Bustle — Sign Up For The Newsletter
From hair trends to relationship advice, our daily newsletter has everything you need to sound like a person who’s on TikTok, even if you aren’t.