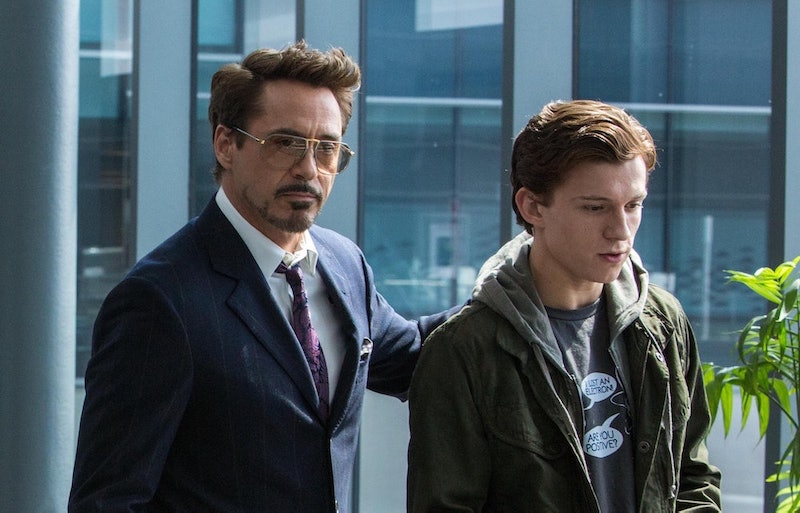 Get ready to love this 3,000. On the heels of Sony and Marvel’s Spider-Man dispute, Tom Holland and Robert Downey Jr. hung out — proving that Spider-Man will always be part of the MCU family. Holland and Downey Jr. — who last starred opposite each other in Avengers: Endgame as Peter Parker and Tony Stark, respectively — spent some time in the great outdoors and shared a series of selfies taken with the help from a shoe. As in, zoom in closer on the pictures and Downey Jr.’s sunglasses seemingly reflect sneakers propping up the camera. His fictional counterpart is an industrialist, after all. Tony Stark would so approve of this makeshift selfie method.

Holland took to Instagram on Aug. 22 to capture their hangout session. He simply captioned the set of selfies with the Spider-Man line, “We did it Mr Stark!” The four selfies conclude with the two posing with Iron Man and Spider-Man figures. His caption now feels like a deep cut to fans considering the recent Spider-Man news.

In an announcement that sent shockwaves across the Marvel fandom, Deadline reported on Aug. 20 that Spider-Man would no longer be part of the MCU due to a dispute between Sony and Marvel. Both studios were unable to reach an agreement in regards to the future rights of Spider-Man, resulting in a cutting of the ties. It's unclear how exactly this will effect future films, but, it will almost definitely mean the end to Spider-Man and Iron Man's closely intertwined story.

As per Deadline, sources maintained that Marvel president Kevin Feige withdrew from future Spider-Man films after Sony declined to meet the terms of a “50/50 co-fi stake” for Marvel's "continued guiding hand." However, Sony issued the following statement to Bustle on Aug. 20 about the matter: “Much of today’s news about Spider-Man has mischaracterized recent discussions about Kevin Feige’s involvement in the franchise. We are disappointed, but respect Disney’s decision not to have him continue as a lead producer of our next live action Spider-Man film.”

The statement continued, “We hope this might change in the future, but understand that the many new responsibilities that Disney has given him – including all their newly added Marvel properties – do not allow time for him to work on IP they do not own. Kevin is terrific and we are grateful for his help and guidance and appreciate the path he has helped put us on, which we will continue.”

The dispute between Sony and Marvel stunned fans, as the fate of the beloved superhero remains unclear. Still, Deadline reported that Sony has two more Spider-Man films in the works with Holland set to star. But, even though fans will be seeing more of Holland's Peter Parker on the big screen, audiences are still wondering how his story can move forward after being so heavily integrated into the MCU. Furthermore, Spider-Man’s departure from the MCU would raise a lot of questions given the events put forth in Infinity, Endgame, and Spider-Man: Far From Home, the latter of which served as a major box office hit upon its July 2 theatrical release. As Deadline noted, Far From Home currently serves as Sony’s highest-grossing film.

Peter Parker's role in the MCU may be unclear at the moment, but at least his friendship with Tony Stark lives on forever — both on and off screen.