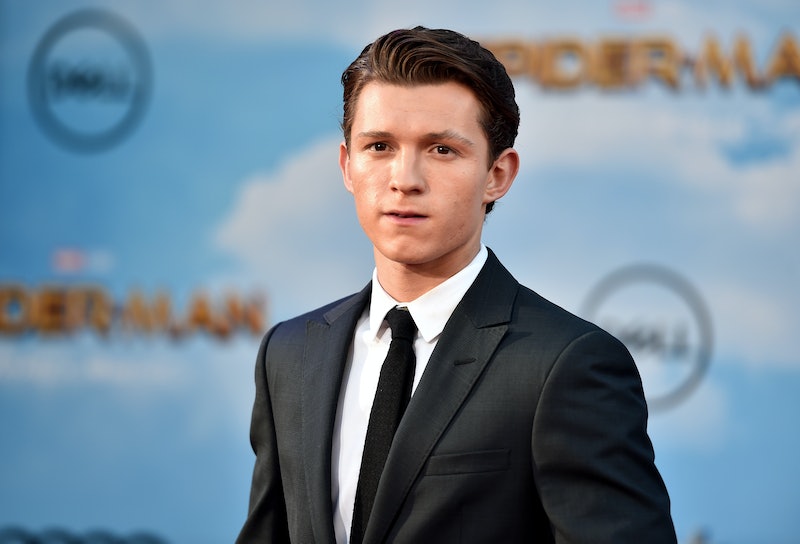 When he became Marvel's newest Spider-Man, Tom Holland rocketed up Hollywood's list of stars to watch, as well as the list of the town's most eligible bachelors. Now, in addition to actor, dancer, superhero, heartthrob, Holland can add Oscar presenter to his resumé. But for all his public career milestones, Holland's personal life is kept pretty private, despite fans dying to know who Tom Holland is dating for months. So far, the Marvel Cinematic Universe's youngest superhero (not counting Baby Groot) has been able to keep his romantic life under wraps.

Over the years, Holland has been linked to Ella Purnell of Miss Peregrine's Home for Peculiar Children as well as reported childhood sweetheart Elle Lotherington, but the actor has yet to take any romantic relationship public. Most recently, rumors that Holland is dating Zendaya, his Spider-Man: Homecoming love interest, have taken over. Holland and Zendaya's camaraderie on and off camera sparked many fans to ship the couple when the movie was released last summer, and tabloids were quick to follow suit. People reported that the two were dating in July of 2017, citing a source. "They started seeing each other while they were filming Spider-Man," the unnamed source told the magazine.

At the time, Zendaya and Holland were quick to shoot down reports of their allegedly budding romance. "My favorite is when it says we go on vacations together HA! I haven't been on a vacation in years!" Zendaya joked on Twitter.

Zendaya flat out denied any romance in an interview with Variety in August with a simple "No." The actor did, however, concede that she and Holland were very close, saying, "He's a great dude. He's literally one of my best friends." Despite early denials, romance rumors have persisted. In December, Us Weekly reported that Holland had earned a seal of approval from Zendaya's family. "Tom has met Zendaya's family and they love him," a source told the magazine. "They are still seeing each other, it's been about a year." Neither Holland nor Zendaya commented on the report. In fact, they have both been very successful at keeping their private lives private.

Without confirmation, it's tough to say whether or not Holland is, in fact, dating Zendaya. That said, frequent interactions on social media, and paparazzi photos are enough to keep the ship alive. In late February, the two were spotted at a BAFTAs after party, via Just Jared, and a few days later, the duo sent fans into a tizzy when they were spotted grabbing lunch together in Los Angeles. Not only did the paparazzi snap photos of the two together, Zendaya also posted about their run in with the photogs on Snapchat, claiming that Holland had attracted the media. "I can't take Tom anywhere. Here we are, just trying to enjoy a little lunch, but no. Every time he's here, paparazzi people wanna find us," she said on Snapchat.

Both Holland and Zendaya are set to present at the 2018 Academy Awards, and many fans are hoping for the duo to make a splash on the Oscars red carpet together. After all, Hollywood's biggest night is a great time for couples to make their red carpet debut.

Even if the two don't attend the Oscars together, though, fans should expect to see some interaction between the Spider-Man co-stars. Holland will be pulling double duty at the Academy Awards, both presenting and broadcasting Instagram stories from the Academy's official account. Even if Holland isn't dating Zendaya, their social media presence strongly suggests that she will, at the very least, pop up on his behind-the-scenes Oscar feed.

So, fans, if you love Holland, be sure to check out the actor's live feed from the Oscars. Who knows, he might just reveal he's in a relationship — or that he's single and ready to mingle.