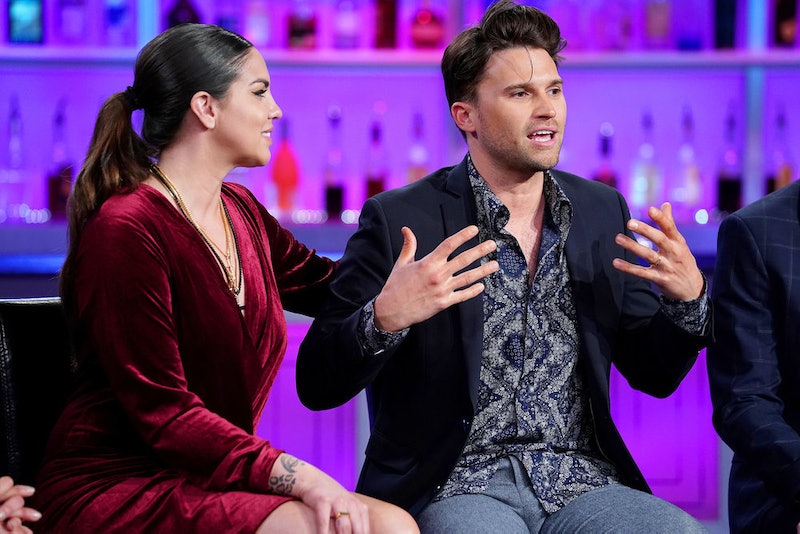 Not many couples have withstood the test of time on Vanderpump Rules, but Tom Schwartz and Katie Maloney-Schwartz have — for better or for worse — endured. As Schwartz and Katie's relationship timeline shows, the two have been through a lot to get to where they are now. And along the way, they've matured into better partners — though, of course, they do occasionally fall back into their old ways.

The couple hasn't necessarily weathered a smooth road in Season 7, but it has shown Schwartz jumping in when Katie needed him the most. SUR's resident rapscallion James Kennedy, aka the self-appointed white Kanye West, went on an alcohol-fueled tear in the beginning of the season, during which he took it upon himself to criticize Katie's body. She stood up for herself and told Lisa she was sick of tolerating James' behavior, and the DJ was, once again, out of the job. Unfortunately, Katie got blamed for James (because it was somehow Katie's fault that James chose to get drunk and say horrible things?), but Schwartz was there to defend his wife both against James and against his best friend Tom Sandoval, who is angry because he thinks it's Katie's fault that James fot fired. It's a whole thing, but what matters is that Katie and Schwartz are a cohesive unit on Vanderpump Rules — let's look back how they got there

In an interview with Bravo, Schwartz and Katie confirmed that Kristen Doute was the one who set them up. "The very first night there was no spark," Schwartz said, "But the second night I was introduced to her and given a little backstory, that's when it clicked."

Season 3, Episode 5: In The Doghouse

Schwartz, now a full member of the Vanderpump Rules cast, gets Katie a dog to push off proposing. Katie isn't pleased, and she won't be for many years until he actually proposes.

Season 3, Episode 6: Really In The Doghouse

Sandoval, Schwartz, and Jax come back from a Las Vegas trip with the stench of infidelity rumors trailing behind them. It's not a good look, and it's a bad moment for the couple.

Cheating scandal behind them, Schwartz presents Katie with a gift at Scheana's wedding — what Katie calls a "ring on a string." It's exactly the gift that Katie told Schwartz never to buy her, because she wanted an engagement ring or no ring at all. Schwartz doesn't understand her frustration, because he's Schwartz.

For some reason, the Toms wanted to immortalize their significant others with tattoos, and they did so by getting ink on their butts. Ariana and Katie weren't happy with the guys' decision-making skills.

After an extended ultimatum, Katie and Schwartz finally get engaged. Everyone is shocked, but none more so than Katie, who has been waiting for this moment forever.

Season 5, Episode 4: Therapy Is A Problem

They may be engaged, but Schwartz and Katie still have their issues. One for Katie is that Schwartz is going to therapy without her because he is trying to figure out how to navigate her mood swings, and this exacerbates said swings and causes a huge fight.

A joint bachelor/bachelorette party for Schwartz and Katie in New Orleans goes really bad and ends up with all parties from both sides screaming about Schwartz's alleged infidelity from three seasons ago. They are all in drag, so while the conversations are rough, the sight is... pretty hilarious. This is where Sandoval calls Schwartz a "battered wife."

OK, there wasn't a dry eye in the house when Katie and Schwartz got married, to the point where Sandoval was literally crying into the dog's fur. It took them a while to get here, but at least Katie and Schwartz made it down the aisle! It's a new start for the couple.

Rumors emerge that Schwartz cheated on Katie during a drunken make out with a friend of Lala's, and Katie is once again exhausted by her husband's tendency to black out and not remembered what happened. It's all squashed eventually, but it's a low point for the couple.

Season 6, Episode 9: Katie Has a Breakthrough

After Lisa's friend Kevin Lee tells Katie she needs to lose some weight, Katie reveals the time she almost died — she once fell through a skylight and suffered severe injuries. Now, Katie tells Schwartz, she finally feels like her old self, and someone who is confident and comfortable in her own skin. It's a connecting moment for the couple.

Normally, being in Las Vegas means trouble for Schwartz, but this time, Katie accompanies her husband on a business trip for TomTom. Living in the lap of luxury suits these two. It didn't go well business-wise, but that was some suite Lisa set them up in.

James' latest insult was the last straw for Schwartz, who screamed at James in a way that Schwartz never has before. Finally, some fire! Let's see him defending Katie with this ferocity from here on out, please.

It's not the easiest love story, but it's certainly real — let's hope for many more happy years for Vanderpump's longest lasting couple.

More like this
Kanye West Revealed The High Percentage Of Time Kim Kardashian Raises Their Kids
By Brad Witter
Clayton & Susie Broke Up, Citing "A Significant Amount Of Pain" After 'The Bachelor'
By Jordyn Tilchen
‘The Ultimatum: Queer Love’ Is Officially On The Way
By Radhika Menon and Kadin Burnett
Kendall Jenner Thinks Tristan Thompson "Wanted To Trap" Khloé With Another Baby
By Jake Viswanath
Get Even More From Bustle — Sign Up For The Newsletter