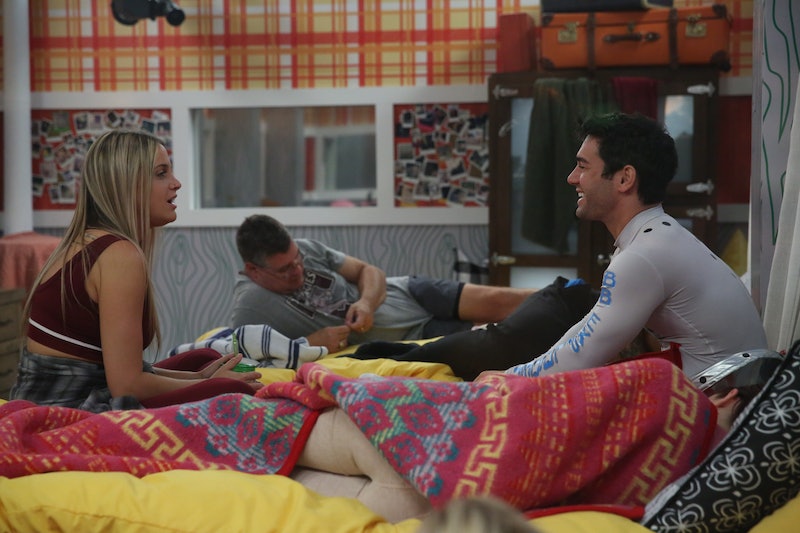 Big Brother's most solid duo is likely being split up this week. But if Christie gets evicted on Big Brother 21, then Tommy stands a much better chance of winning. There are several reasons why Christie was bad for his game — one of them being that the knew each other before the show.

On the first episode of this season, Tommy revealed that Christie had previously dated one of his family members for seven years. So, like, Tommy and Christie really knew each other. In a game where you never know who you can trust, having that kind of a history with someone is a huge advantage. Of course, only if you keep it a secret.

Viewers saw how the houseguests responded to the rumor that Kat and Holly knew each other. Jack almost flipped the whole vote to evict Kat, and it blew up the Six Shooters alliance. If Tommy and Christie's secret were to get out, it would doom both of their games. And... Christie hasn't been very careful about not letting the secret slip.

On the Aug. 18 episode, Christie was shown talking about how close her city is to where Tommy lives. She knew the exact exit numbers and everything. Cliff joked that they must know each other. Oh, how right he was. Tommy seemed pretty upset in his Diary Room session about Christie being so blatant about their living proximity, and it's easy to tell he's getting fed up with her in this game.

Tommy wants to work with Jackson, Holly, and Nick — whom Christie doesn't like. Christie has been vocal about wanting them out, and people associate Christie with Tommy. If she was the target this week, he could easily be the target next week if people think that her agenda is also his. Tommy seems to have realized that and he's been putting some distance between him and Christie in the house and in his Diary Room sessions.

When Christie was nominated, Tommy said in the DR that if it was her time to go, he was OK with that. And after she didn't win the Veto, almost certainly sealing her fate, Tommy didn't express much remorse. "I can't waste my dream because she is ruining hers," he said in the DR.

Tommy is a big fan of Big Brother, so he likely knows that Christie is bad for his game. She's opinionated, unafraid of conflict, quick to cry, and pretty loud about who she wants out in this game. Tommy is playing a much more low key game. He's friends with everyone, and he can't have people lumping him in with Christie and assuming he feels the way she does. So far, Tommy's distancing from Christie has been working. Michie said in the DR during the Aug. 21 episode that he trusts Tommy and wants to keep working with him once Christie is out of the house. Michie doesn't suspect that they know each other at all.

However, Christie has also noticed that Tommy is growing distant, and she's upset about it. "I didn't expect to feel alone with Tommy here," she said in the DR. Tommy mentioned in his own DR that he hopes their real life friendship won't be affected by the game, but he could potentially lose Christie's vote in the finale if he goes overboard with the distancing.

However, losing one vote versus not having Christie blow up his game by letting it slip that he knows her is probably a good trade off. With Christie out of the picture, Tommy would be free to play the game how he sees fit and wouldn't owe anyone anything (like a vote or using a veto). He may be losing an ally this week, but he'd be gaining a renewed chance to win things and play his way. And he seems to be willing to make that trade.