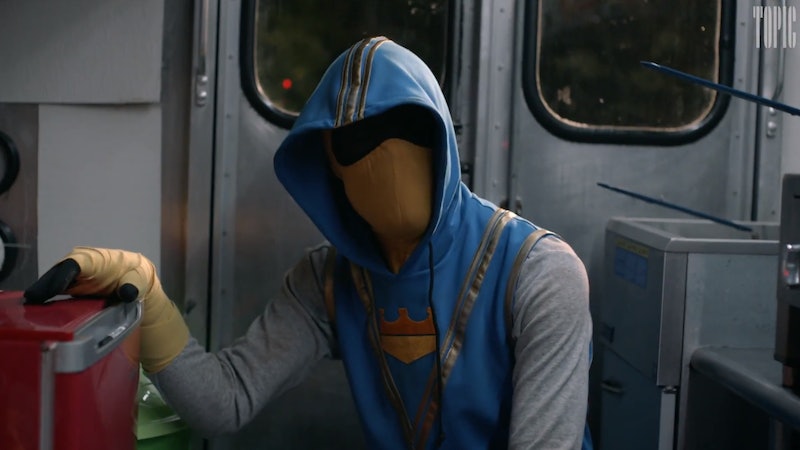 Fictional superheroes often tend to be products of their times — Captain America rose out of World War II, Superman was inspired by the pulps of the ‘20s and ‘30s, and so on and so forth — so it’s not unreasonable to wonder what kinds of characters our current era might spawn. A Gen X or millennial superhero that lives in Brooklyn? I mean, that sounds about right — and that’s what we get in aka Wyatt Cenac, a new web series featured on Topic. There’s more there, though, than just a slew of generational stereotypes thrown on top of a familiar theme — which is exactly what makes the whole thing so relatable.

Created by (surprise!) writer, actor, and comedian Wyatt Cenac, aka Wyatt Cenac is sort of in the vein of Kick-Ass, Super, and other… I guess I’d call them “alternative superhero films"? Or… something like that? You know what I'm getting at — they’re not the big, action movie blowouts we get from the Marvel and DC films, and tend to center around everyday people, rather than folks with actual superpowers (and yes, I’m counting extreme wealth as a superpower here; that’s definitely a major tool in both Bruce Wayne’s and Tony Stark’s bags of tricks).

That, too, is where aka Wyatt Cenac lives. As the first episode of the six-part series demonstrates, we spend the story bouncing back and forth between Wyatt as he is at night and Wyatt as he is during the day. By night, he can be found acting as the Viceroy, performing heroic acts such as foiling the notorious Bushwick bike theft ring…

…And whining about how his back hurts and why he hates Bushwick and asking for a ride home because he just can’t deal with it himself.

By day, he can be found…

…Whining about pretty much the same things he complains about at night, really. Although he may also, say, spend a significant amount of time on the patio of a local bar with his friends discussing the difference between ramen and soup. (Anyone who has ever been to Brooklyn knows exactly the kind of bar I’m talking about. They usually do really good brunch. I still miss the Guinness pancakes from the one I used to live by, and I haven’t lived there for over four years.)

Sometimes, Wyatt finds himself attempting to fight crime during the daytime as himself. He is not, for example, well pleased when a pair of young, hip, Brooklyn-dwelling parents bring their baby to the bar at which the aforementioned ramen vs. soup discussion is occurring:

But his attempt to bring the cops in for reasons of alleged child endangerment… does not go as planned:

Although, as Wyatt’s friends point out as they leave the bar, which is now crawling with children, he’s part of the problem; his moving to the neighborhood helped make it more accessible, so he can’t now go ahead and restrict access to it for everyone else.

By the end of the first episode, he finds himself going up against a chop shop… just not the kind of chop shop you’re probably thinking. To quote Wyatt’s “sidekick,” it may not be the crime that Viceroy wants, but it is the crime that Brooklyn deserves. Watch it here:

What’s interesting to me is that this isn’t really a “millennial superhero” story. Cenac was born in 1976, which means he’s a Gen Xer, rather than a millennial — and a lot of what the series deals with is the push and pull between being part of a generation that’s still considered “young” by many (*coughboomerscough*), but which isn’t quite sure what to make of the generation following them. (Or at least, that’s a lot of what I’m personally taking from the series; maybe it’s just me. Is it? You tell me.) Cenac’s fictional version of himself — both unmasked and masked — grapples with issues that all ultimately have to do with change, whether it’s how the neighborhood you live in has changed since you moved to it six years ago or what it’s like dating in our current world. That’s what makes it so relatable — even if you’re not necessarily a Gen Xer. (As a mid-‘80s baby, I qualify as an “older millennial,” but so much of aka Wyatt Cenac rings true for me.)

Catch the full series over at Topic.