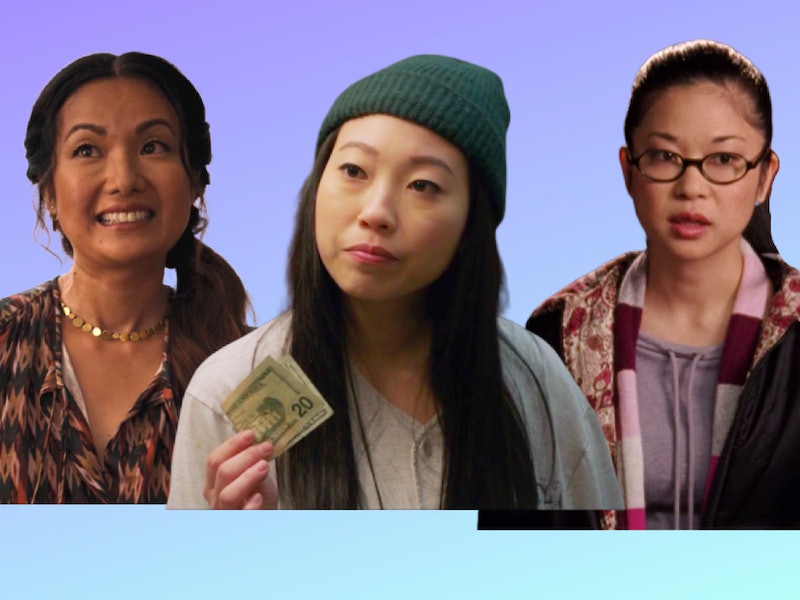 When it comes to the kinds of roles played by Asian American actors in Hollywood these days, we’ve come a long way in that we no longer see overtly offensive stereotypes. But in previous years — from prototypical nerd Takashi in Revenge of the Nerds to Donnie Darko’s Cherita Chen — it was common to see a wide variety of secondary characters with racially derived “quirks” who acted as nothing more than low-hanging comedic fodder. As we’ve moved away from these stereotypical depictions, we’ve also managed to expand this bizarre distillation of the Asian American experience into another, less obviously offensive formula. Somehow, to actively subvert the traditional Asian American stereotypes, it also seems like we’re flirting with a new, reactionary trope, for Asian American women in particular: that of the quirky sidekick.

Some examples just from the last few years alone include Friends From College’s hippie-dippy Marianne, Awkwafina’s off-kilter pickpocket character in Ocean’s 8, The Office’s Kelly Kapoor, Glee’s brooding Tina Cohen-Chang, and Orange Is the New Black’s naive, mercurial SoSo. And the list of sidekicks continues to grow as we start to see more and more productions embrace what, at its most base level, may be considered diversity. It is progress in the sense that Asian American characters are getting distinctive storylines in these productions, but the fact that this sidekick throughline can even be drawn proves there's more work to be done when it comes to upending stereotypes altogether.

The quirky sidekick is something that hasn’t escaped the attention of Asian American creators in Hollywood. As The Killing’s Veena Sud said during a discussion hosted by the Television Academy last year, a push toward diversity has boxed many of these supporting characters into the “diverse quirky best friend who makes a few jokes and goes home, and the love story is with two white straight people.”

The quirky trope is not quite as ubiquitous as the nerdy Asian or model POC trope — which is something entertainment in general is, thankfully, starting to leave behind. But it’s beginning to emerge as a new type of foil that serves to highlight (primarily white) protagonists. And while the quirky sidekick trope is progress in the sense that it’s an opportunity for Asian American actors to work their way up to a starring credit, it’s also something we should also be careful not to put too much stock in it.

As Dr. L.S. Kim, Ph.D., an associate professor at the University of California, Santa Cruz, and a scholar on television studies specializing in racial representation, says, there’s a level of flattening — or a lack of nuance that means these characters feel like stock representations rather than fully realized and multidimensional humans — that happens when these kinds of tropes are employed. And though this is something that happens across the board to most characters of color, it’s notable that the quirky Asian sidekick role is one that likely evolved from a desire to subvert conventional norms.

“The ‘quirky sidekick’ is another kind of iconic, visual shorthand,” L.S. Kim tells Bustle. “[It’s] the opposite of the model [person of color], but not necessarily thoughtfully developed as a character.” Just look at the now-infamous Asian woman with a dyed hair streak trope, which uses the hairstyle to aesthetically denote a difference between the “edgy” character and your aforementioned “demure” Asian.

L.S. Kim explains that the reliance upon this kind of binary often occurs when writers attempt to create Asian American characters who don’t subscribe to traditional media norms. “Offering a complex character, of any race or gender, requires labor and creativity,” L.S. Kim says. Often, reliance on tropes becomes a kind of shorthand to create inferences about the character’s personality and backstory.

She also points out that when these characters have served their purpose in terms of propelling the narrative forward, they tend to dissipate into the background, as seen with characters like The Avengers’ Helen Cho and Scott Pilgrim’s Knives Chau.

“The quirky sidekick is, indeed, fun and we can take pleasure in the unexpected appearance, but if you think about it, it is also sad that such a character is often, ultimately, alone,” she continues. “We should recognize, and demand, that there is more possible when it comes to seeing Asian Americans represented in the media.”

We have to understand the larger context: that Asian American characters are so few and far less developed than white characters.

To L.S. Kim’s point, a 2017 study on Asian American tokenization within primetime and streaming television showed that in addition to having low visibility, Asian American characters also were “largely isolated relationally from other characters.” The result? Asian American women, in particular, are put on the back burner and tend to be seen as “‘pass-through characters,’ or plot points for other characters’ stories,” study author Dr. Nancy Wang Yuen told The Women’s Media Center.

So why isn’t this being discussed? L.S. Kim believes there’s likely a hesitation in calling the quirky Asian American character a trope, “because it would then admit that there is an element of racism behind the trend [toward diversity].”

“I am happy to see Asian faces on screen, especially in unexpected roles. However, we have to understand the larger context: that Asian American characters are so few and far less developed than white characters,” she says. “It seems there is a practice to cast an Asian American in a role with absolutely no cultural specificity or with little connection to their familial or racial experience.”

That said, the prevalence of the quirky sidekick is also somewhat complicated by broader Hollywood trends, especially when the overall state of the industry is taken into account. While diversity has become a big talking point, attempts at diversifying casts can still prove tricky within many projects. “Hollywood is not a fast-moving machine,” casting director Julia Kim (no relation to L.S. Kim) tells Bustle. “By the time they’ve jumped on a trend, that trend’s already jumped the shark. They’re just starting to incorporate due to pressure.”

However, Julia Kim believes that there’s an upside to this as well, mostly seeing as how “these sidekick roles in a studio feature film are great ways for an actor to shine. To be able to add that to a résumé, that they [acted in] a Warner Brothers or Universal [project] — that matters.”

Pointing out that many Asian American actors don’t have the star power many Hollywood execs are looking for in terms of guaranteeing box office returns, Julia Kim says that the fact that many productions are now placing emphasis on hiring a diverse cast is a huge step in the right direction. That said, she does admit that there is a possibility for the entertainment sphere to grow in terms of executing these types of characters in a more nuanced way.

So what’s the solution? Or perhaps more importantly, how do we allow the quirky Asian sidekick to flourish without it becoming the new shorthand archetype? According to L.S. Kim, it’s all about getting more Asian Americans not just in front of the camera, but behind it as well.

Additionally, Julia Kim argues that in order to make any progress, “you have to create the nuance and visual for the people who lack the imagination.”

Keiko Agena — who rose to fame as Gilmore Girls’ Lane Kim, arguably the first example of the quirky Asian American phenomenon — also agrees with this assessment, saying that as an actor, you “just try to make the best possible choices with the material you get.”

“If you have writers who are mainly white, they don’t have that diversity in their own lives to pull from — unless they purposefully go out and hire that kind of staff [to tell a story] they don’t feel comfortable telling,” Agena explains. “That’s tough, but now it’s a lot more positive than even three years ago. But until the writers rooms really change, the actors are only the end result of the decisions that have been made way before.” She also points to the importance of a recent viral hashtag called #ShowUsYourRoom, which asked showrunners to take photos of their writers rooms. Created by Central Park writer Amanda Idoko, the tag aims to put pressure on productions with publicly stated diversity initiatives that may not actually be as inclusive as the writers rooms on other hit shows like Insecure and On My Block.

However, Agena believes that the fact that most characters are now written as “open ethnicity” — or a role that’s open to an actor of any race — is an indication of things gradually getting better. “I think it may be too easy of a brush to say that just because they’re not the lead, then it’s all just for diversity points,” Agena says. “A show is made up of all the people that are a part of it. If you’re not the lead of the show, it’s still an important part of that show.”

From all the scripts she’s been reading for auditions, Agena also feels like we’re on the verge of a huge change in terms of Hollywood casting.

“There’s a big shift that’s coming that hasn’t necessarily fully landed yet, since there are a lot of scripts and projects up in the air now,” Agena explains, pointing to shows like Daniel Dae Kim’s The Good Doctor. “I think you’re going to see more Asians in lead roles.”

But we may have to wait a little bit longer to see further, tangible results of this shift. Add this to the fact that most leads still tend to be white, and that means studios are likely “looking to fill out their cast,” per Agena.

“If they don’t want it to be a purely white cast, which most studios and networks don’t want, you [end up having] a lot of supporting roles go to people of color,” Agena theorizes. “That’s possibly why you’re seeing more of this one kind of Asian woman.”

And while it’s important to maintain a level of realism in terms of Hollywood’s progress, that doesn’t mean this is a problem to just be glossed over, especially when there are so many diverse stories to tell and perspectives to explore. After all, as L.S. Kim puts it, “the goal is to have more television and film (shared through numerous platforms) with Asian Americans included and involved.”

“I don't think there is any one so-called, ‘Asian American story,’” she adds. “Rather, it is about a plethora of Asian American perspectives that can be employed, emphasized, simply shared, through [Asian American creatives].”