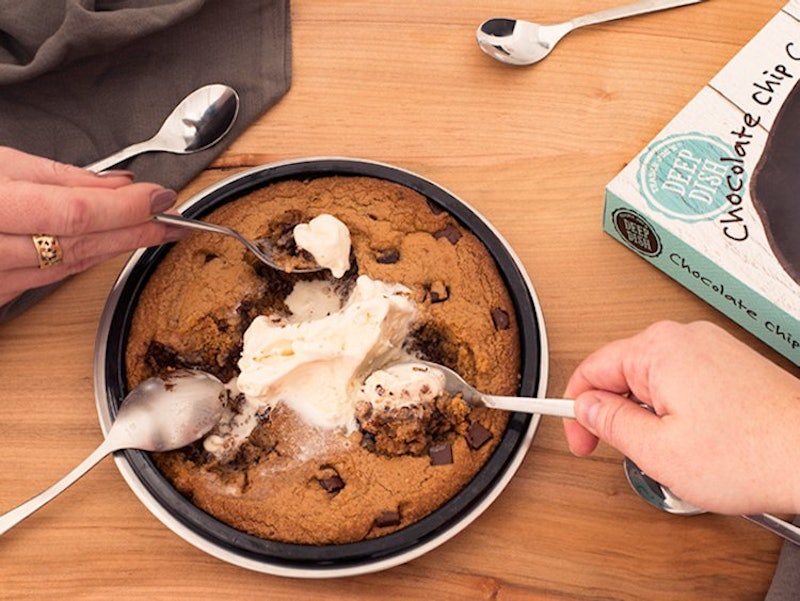 Valentine's Day is just around the corner, and it looks like we all just collectively found ourselves a soulmate. It is, perhaps, a little less sentient than we were planning, but love is all about making compromises — and compromise we all shall, to be united with this literal one-pound deep dish chocolate chip cookie at Trader Joe's for life. Honestly, just typing that made me weak at the knees, y'all.

For those of you who have known the glory that is a cookie skillet — in layman's terms, half-baked cookie dough you literally eat out of a skillet (and in dentists' terms, "please, please don't") — this is basically that exact concept, except actually affordable and way easier to make. The dish, called "Trader Joe’s Deep Dish Chocolate Chip Cookie," is sold in the freezer aisle and can be heated up in the microwave or in a conventional oven — at a mere $3.99 a pop. As Trader Joe's themselves point out, comparable cookie skillet prices are around $8.99 each (and if you're living in New York or an equally price-gauged city, $1,000,899), so this is one delicious bargain worth braving the cramped aisles of your local TJ's for.

And when it comes to this dessert, the more the merrier — the cookie skillet is meant to serve up to ten people. (I mean, game on, Joe.) And if you're already a stan of Trader Joe's cookie dough like I am, you're in luck. TJ's said they created this skillet based on the cookie dough recipe everyone already knows and loves, including "real butter, brown sugar, and vanilla, as well as copious amounts of rich chocolate chunks."

It is important to note that, as delicious as an ooey-gooey cookie skillet is on its own, it's just plain irresponsible to eat one without ice cream either recklessly plopped on top or on the side. Trader Joe's recommends their own TJ's French Vanilla Ice Cream to do the trick. I recommend whatever you can scoop onto it fast enough that your friends won't all eat the cookie skillet out from under you while you're doing it.

If you're looking for more dessert inspo by way of everyone's favorite Joe, turns out you have plenty more new options to choose from. On Feb. 4, Trader Joe's announced the addition of Brownie Crisp Coffee Ice Cream Sandwiches — yet another dessert option that draws from some of TJ's tried-and-true favorites.

Trader Joe's uses its TJ's Brownie Crisps as the outside of the sandwich, which taken on a much softer, more "fudgy" flavor with the scoop of coffee ice cream in between them. These too retail for only $3.99, and seem like the perfect side dish to a cookie skillet, if you're really willing to go in hard.

Even more on the nose for Valentine's Day are Trader Joe's new Gummy X's and O's.

The variation of the TJ's Scandinavian Swimmers is a fun seasonal mix of red, pink, and white X's and O's — a perfect addition to a Valentine's Day card, or the perfect excuse to spend your lunch break becoming the new office champ at tic, tac, toe.

And as usual, if you're going for a certain ~vibe~ this Valentine's or Galentine's Day, you ca always top off your dessert spoils with a bottle of TJ's famous two buck chuck (or three buck, depending on where you're at) or one of their countless delicious twists on coffee. 'Tis the season to indulge in dessert and raise a glass to true love, be it with a human, or whatever #blessed creation Trader Joe's comes up with next.