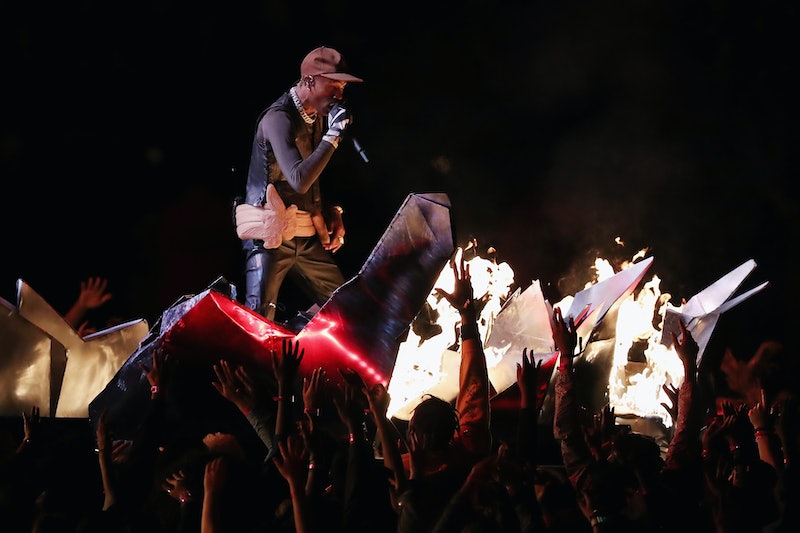 Maybe you thought there wouldn't be any major fashion moments from the Super Bowl half time show given Maroon 5's slot as the headliner, but you'd be wrong. Travis Scott's Super Bowl belt had social media users talking, but mostly, they were talking about what exactly the belt was.

In case you missed the 2019 Super Bowl half time show, Maroon 5 performed with Travis Scott and Atlanta own's Big Boi. The band threw it back to some of their older classics like "Harder To Breathe" and "She Will Be Loved" and played some of their more recent hits such as "Girls Like You." While the band's performance was great, there was actually a major fashion moment that could have just stolen social media's attention, and it's all about Travis Scott's belt.

When Scott zoomed onto the stage in an animated asteroid (at least for television viewers) following a Spongebob Square Pants intermission, he appeared wearing all black with black pants, a black mesh shirt and vest, and a seemingly furry-looking belt. The belt was kind of a tool belt meets fanny pack hybrid, and it didn't seem to serve much of a purpose other than a fashionable one.

The real question, though, wasn't whether people liked the style but was more about what it actually was.

Social media users were fairly confused about what exactly the belt was. In photos of the performance, the belt seems to have things carved into the sides with one of them appearing to potentially be an eagle, but seeing it on the television screen, that detail wasn't exactly possible to see.

The belt's other side also seems to have some sort of meaning with what appear to be three raised fists. While these images are making their way online now, social media users may not have seen them yet, and the belt still remains a mystery, a very confusing mystery.

People thanked Scott for "adding some life" to the half time show, but despite his great performance, the belt just can't be denied. The mystery is just too much.

The comparisons to famous characters and films started to build online (no pun intended, but kind of, pun intended).

Was he serving Bob the Builder realness? Some people clearly thought so.

Others couldn't help to compare him to another famous builder: Tim "The Tool Man" Taylor of the classic 90s series Home Improvement.

Is it more of a spy thing? Was he smuggling a ring for Kylie Jenner in there Kim Possible style?

Of course, there's this Dumb and Dumber reference that just can't be denied for its accuracy.

Fans of Scott and viewers of the Super Bowl may never know what exactly the meaning of the rapper's belt actually is. Honestly, though, it kind of created a viral fashion moment, and if you're going to perform at the Super Bowl, why not create a social media stir? Here's to Travis Scott's Super Bowl belt. May it have a ring for Kylie Jenner hidden inside.