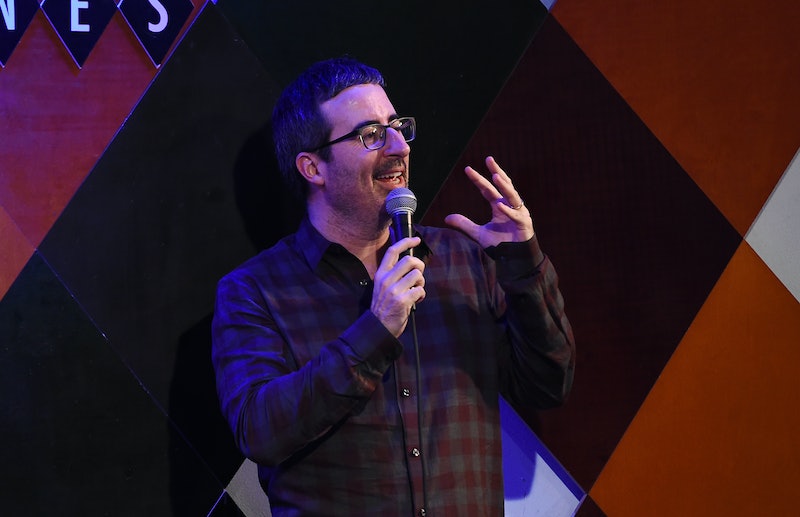 Last Week Tonight host John Oliver returned to his old stomping grounds on Monday. The HBO host was a guest on The Daily Show, where host Trevor Noah was the one asking the questions this time. As predicted, the two comedians' banter kept things more than entertaining. Then, Noah asked Oliver if Trump was ever "enjoyable," and the answer was perfect.

Coming back to his late night roots on Comedy Central — if just for a visit — Oliver seemed comfortable in the interviewee's chair. Until this question, that is: "Do you ever enjoy Trump, though?" Noah asked.

Oliver immediately looked thrown. "I'm thinking, I'm coming up snake eyes on that roller at the moment. Have I ever enjoyed him?" Oliver said, pausing to think it over. But then he delightfully hit the answer out of the park with a response that was thoughtful, analytical, and even a bit somber:

He's a charismatic, funny man. So he was like a fun clown. But the beauty with clowns — actual clowns — is that they knock into things, and their cars explode, and their shoes are too big. But they don't run the most powerful nation in the world. So, I feel like you take the best clown and you put them in the Oval Office, and things get less funny. That's my concern.

Oliver then went on to joke just a bit more at Trump's expense. "He was funny. He was a funny man, and he should have stuck to that, rather than whatever it is he's doing now," he said.

"It is terrifying, every single day is terrifying," Noah added. He also gave Oliver the credit for making it clear how terrifying things actually were, noting Oliver's declaration that it was time to stop simply tweeting and actually do something to confront the Trump administration.

I feel like anything that that we try and do, I want to do through comedy. So I feel like everything is in pursuit of a joke. ... When we do our long stories ... you feel like you want to give some sense of closing an argument out. So, you don't want to talk for 20 minutes, paint a terrible picture, and the say "OK, good night." So sometimes we like to point towards what we think would be a solution to those things. ... [B]ut that is not the reason for doing what we do.

Noah then asked another poignant question: "Do you ever read the news, 'John Oliver Eviscerates,' and you're like, 'I was just trying to talk about the news.' Do you ever accidentally eviscerate, I guess is what I'm saying?"

Oliver said similar things used to happen to Jon Stewart for his Daily Show segments, adding, "In a long piece, we work really hard to put a lot of nuance in there ... 'cause things are very rarely completely black and white. So, we really try and inject nuance, and then you can't really do anything about the fact that's often packaged in a very reductive way"

I guess that just means you need to watch each and every episode of Oliver's show in its entirety.