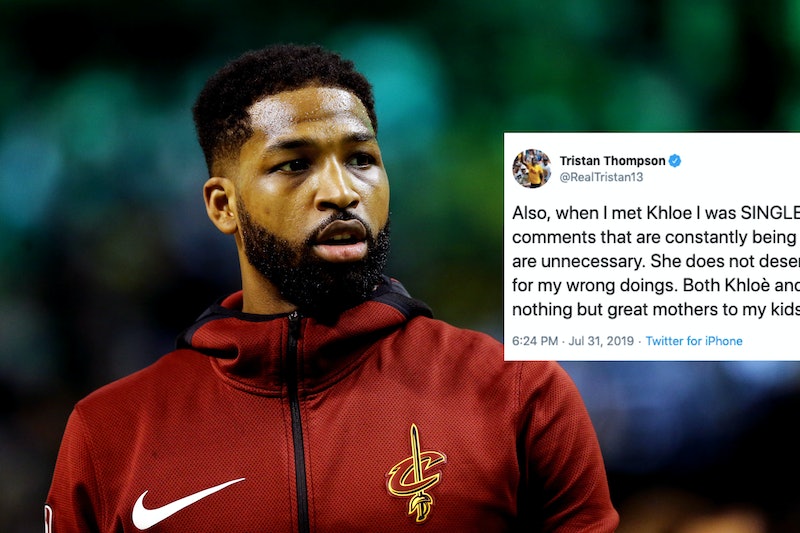 While Tristan Thompson's ex-girlfriend, Khloé Kardashian, has already spoken out in regards to rumors that the basketball player cheated on his then-pregnant girlfriend to be with her, the athlete had yet to do so himself — until now. On Twitter recently, Thompson addressed the claims that he cheated on Jordan Craig with Kardashian, only about a month after the Revenge Body star did the same. Better late than never?

On July 31, the Cleveland Cavaliers player addressed a couple of rumors on Twitter. First, he told his followers that he was not on vacation (particularly, with Craig, as it has been rumored) and has been training for the upcoming NBA season. Since he was clearly in the mood to clear up a few rumors, he decided to also clarify one concerning when his relationship with Kardashian actually began.

"Also, when I met Khloe I was SINGLE," he wrote, before going on to defend the mother of his daughter, "The negative comments that are constantly being directed towards her are unnecessary. She does not deserve all this backlash for my wrong doings. Both Khloè and Jordan have been nothing but great mothers to my kids." So, between Kardashian's previous clarification and Thompson's Twitter, it certainly sheds a bit more light on the whole messy situation.

This scandal was brought up again in early June after Radar Online obtained court documents that indicated that Craig reportedly claimed that Thompson cheated on her with a woman when she was pregnant in 2016. While Kardashian's name was never specifically mentioned in the documents, it was heavily implied that she was the woman being referenced.

Additionally, it was claimed that the athlete's relationship with the unnamed woman went "viral" and then "everything took a turn for the worst," according to the publication. Craig was reportedly on bed rest as the situation "brought an enormous amount of negative, unwanted attention and stress into my life, and more critically, into my pregnancy."

Shortly after this report was unearthed, Kardashian took to her Instagram Story to tell her followers that she was assured by Thompson and his inner circle that he was single when they started dating. The reality star began to share her "truth," by writing, "I met Tristan because HE CHOSE to go on a blind date with me. A mutual friend set us up. After going on some dates, Tristan told me that he had an ex that was pregnant. Obviously, I was reluctant about us continuing to date or start a relationship." She went on to write that the athlete stressed that his relationship with Craig was over,

"He pleaded with me that the relationship was over long before we met. He had me talk with his most inner circle. He showed me physical poof [sic] (correspondence between the two) and had me on calls with his lawyers to prove his point. His best friends, business associates and even his mother told me, him and his ex were broken up before we met."

The Keeping Up With the Kardashians star also wrote that if anyone was indeed hurt in this scenario (if Thompson's story to her was false), she was sorry for that:

"This is my truth! The truth that I believed and trusted. If for any reason this is NOT in fact the truth, I am so completely and utterly sorry that TRISTAN and his inner circle would lie on something like this! I pray my truth is in-fact that. Lord knows I pray but now, I really don't know what to believe. Truthfully, from the deepest parts of my soul I am sorry! I'm sorry for any pain that has been created either way. No woman deserves to go through anything like this! This is MY TRUTH"

As for why this issue was brought up again recently, it was rumored that Thompson and Craig were on vacation together with their son, Prince, thanks to an Instagram photo the basketball player posted of their little one in late July, according to Cosmopolitan. But, as he recently clarified on Twitter, he hasn't been on vacation during this past summer.

And, of course, as he went on to say, that wasn't the only rumor that he tried to dispel. So, even though that other clarification about the cheating rumors came a bit late, at least Thompson is finally telling his side of the story.

More like this
Kendall Jenner Thinks Tristan Thompson "Wanted To Trap" Khloé With Another Baby
By Jake Viswanath
Kim Kardashian Reveals Her Response To Kanye’s Fashion Opinions
By Jake Viswanath
Who Is Nick Cannon Dating & How Many Kids Does He Have?
By Jordyn Tilchen and Radhika Menon
Hailey Bieber Just Responded To *That* Viral Met Gala Moment
By Radhika Menon and Sam Ramsden
Get Even More From Bustle — Sign Up For The Newsletter