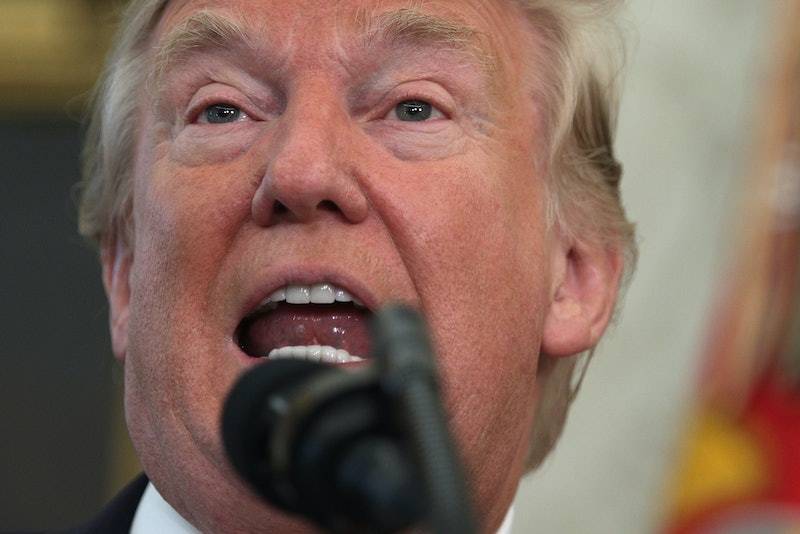 As the president makes his way through Asia, a political firestorm is brewing back at home following allegations that Roy Moore, the GOP candidate for Alabama Senate, initiated sexual encounters with teenage girls — the youngest of whom was 14 — when he was in this thirties. (Moore has vehemently denied the allegations.) On Saturday, when asked about the allegations of child molestation against Moore, President Trump deflected, saying he doesn't know much about it because "I do not watch too much television."

It was an interesting statement coming from the president, whose penchant for cable news has been well-documented by reporters, and chronicled in pieces for Politico and The Atlantic. Trump habitually watches news channels such as CNN, MSNBC, and Fox, and has reportedly yelled at the screen when there's negative cable news coverage on.

Trump is well aware of his reputation, as he told reporters today: "They like to say I watch television — people with fake sources." But the president countered that this isn't so. "I don't get to watch much television, primarily because of documents," he added. "I'm reading documents."

The documents Trump is referring to could well be the ones provided by his aides, who give him press clippings each day that reflect favorably on the president. In January, Trump told Axios, "I like bullets or I like as little as possible. I don't need, you know, 200-page reports on something that can be handled on a page. That I can tell you."

Thus far, two Republican senators have withdrawn their support for Moore, who defeated establishment candidate Luther Strange in a primary runoff for the spot at the end of November. In a tweet, Utah Senator Mike Lee wrote that he "can no longer endorse his candidacy for the US Senate." Steve Daines, a Republican senator from Montana, also pulled his support for Moore.

There has been discussion within the GOP of delaying the special election, but it remains to be seen whether this would be feasible. The New York Times reported that other options being explored by Republican officials seeking alternatives to Moore include fielding a write-in candidate, or simply refusing to put Moore in office should he win.

For his part, Moore has vehemently denied that he ever made sexual advances toward the women that came forward, and painted the allegations as an effort by the Post to discredit his candidacy. In a statement released by Moore's office Thursday, the candidate said that the report detailing the allegations was "based on a lie supported by innuendo," and continued that he could not "understand the mentality of using such a dangerous lie to try to personally destroy someone."

If the president's history of responding to this nature of scandal is any indication, he may likely take the same approach in dismissing the allegations as "fake news" perpetuated by the media. To date, at least 16 women have come forward and accused Trump of sexually harassing them, including Cathy Heller, who said she was groped by the now-president on a plane, as well as Summer Zervos and Jennifer Murphy, both former contestants on The Apprentice.

Trump has repeatedly denied such allegations, and at a recent press conference, spokesperson Sarah Sanders told a reporter that the White House had "been clear" about its position that these women are lying.

In responding to similar allegations against Roy Moore, will the president take a page from his own book, effectively dismissing the claims as a fabrication? For now, it's unclear, but we can expect that he'll watch a healthy dose of Fox News coverage about the incident before releasing any official statement.