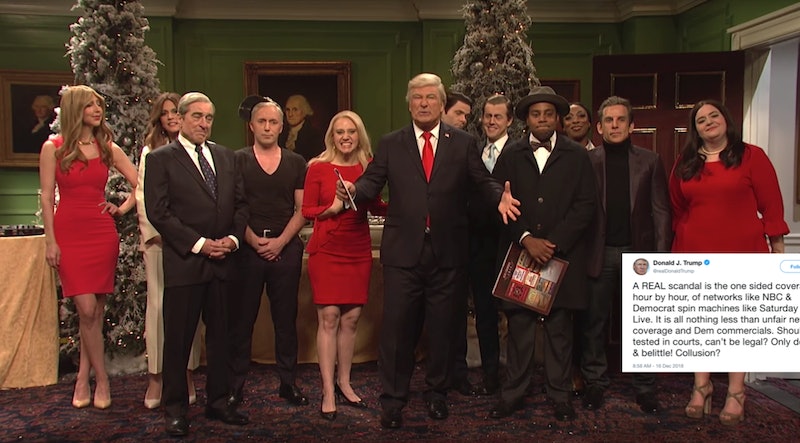 Saturday Night Live has managed to provoke President Donald Trump once again. In an early-morning tweet on Saturday, Trump said SNL's parody of It's a Wonderful Life was made by a "Democrat spin machine" and that the skit "can't be legal."

The sketch, titled "It's a Wonderful Trump," mimics the 1946 movie It's a Wonderful Life. In that film, a guardian angel visits a man who's preparing to take his own life; the angel takes him to an alternate reality in which he was never born to prove that his community would be worse off without him. In the same vein, SNL imagined an angel visiting Trump and showing him what the world would be like if he'd never been president.

It's not a flattering picture. In that alternate reality, SNL imagines that all of Trump's associates at the White House are much happier in non-governmental jobs. Brett Kavanaugh hasn't been appointed to the Supreme Court. A transgender Navy seal team stops a terrorist threat. A Muslim woman immigrates to the United States and creates a cure for hair loss.

The president made it clear in his tweet that he did not appreciate the jokes. "A REAL scandal is the one sided coverage, hour by hour, of networks like NBC & Democrat spin machines like Saturday Night Live," Trump tweeted on Saturday. "It is all nothing less than unfair news coverage and Dem commercials. Should be tested in courts, can't be legal? Only defame & belittle! Collusion?"

As many pointed out on Twitter, free speech is protected under the First Amendment. If Trump were actually going to take Saturday Night Live to court, he would need to argue that the show was defaming him. His tweet raises the idea of defamation ("only defame & belittle"), but as The Washington Post's Michael Brice-Saddler noted, that assertion is made "without any basis."

Trump has occasionally mentioned a desire to make libel laws less strict. "I would loosen them up," he told The Washington Post during the 2016 election. "I think I would get a little bit away from malice without having to get too totally away."

He's also long made it clear that he resents SNL's jokes and much of the criticism he receives from mainstream media. Variety reported that he's even called on the Federal Communications Commission (FCC) twice to challenge the license of NBC, which broadcasts SNL. But as Politico has pointed out, the FCC does not actually grant networks their licenses. The agency's chairman has also acknowledged that "the FCC does not have the authority to revoke a license of a broadcast station based on the content of a particular newscast."

Trump doesn't react publicly every time SNL parodies his administration — he ignores many sketches, but this one did provoke an outburst. Maybe it's the fact that "It's a Wonderful Trump" depicts Melania Trump divorcing him. Maybe it's that the skit pretends that Hillary Clinton is president, joking that she only needed to "visit Wisconsin once" to win. Either way, the combination of a big cast of characters, surprise celebrity features, and presidential ire is undoubtedly giving SNL what it was looking for: excellent ratings.