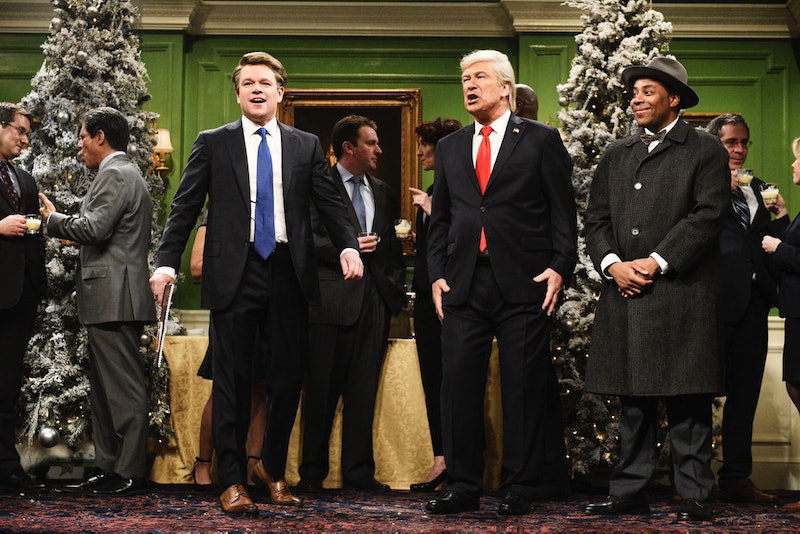 The newest season of Saturday Night Live started in a big way with Matt Damon recreating the Brett Kavanaugh hearing that dominated the news cycle back in September of 2018, and the show wasted no time bringing out his impression for the Damon-hosted episode on December 15. The return of Matt Damon's Brett Kavanaugh to SNL wasn't the showstopping occasion it was in the season premiere, instead being snuck into a Trump-focused cold open, however the show managed to sneak a variety of barbs that will be familiar to anyone who saw Damon's first performance as the Supreme Court Justice, or anyone who remembers Kavanaugh's bizarre hearing from earlier this year.

The political cold open parodies the Christmas classic It's A Wonderful Life, swapping out the desperate but kind George Bailey for the show's desperate and cruel Donald Trump, played by Alec Baldwin. Trump, weary of the ongoing Mueller investigation, wishes to see a world in which he was never elected President, and a kindly angel is more than willing to show him. In this alternate world, Trump's Christmas party is well-attended, populated by a joyous Sarah Huckabee Sanders and a Kellyanne Conway, who managed to retrieve her soul from the devil after Trump lost the election, and a version of Mike Pence that has found a new calling in being a DJ for Christmas parties and wearing extremely tight t-shirts.

The improvements to the lives of those around Trump under a Hillary presidency continue as the sketch cycles through the show's roster of political impressions. Alex Moffat's Eric Trump is no longer the bumbling fool he's been in the show's past, and has instead found to attend adult education classes. Cecily Strong's Melania finds that her thick accent is nearly gone after divorcing Trump. Ben Stiller's Michael Cohen is not sentenced to 3 years in prison and congratulates Trump on the opening of Trump Tower Moscow.

While this season has seen plenty of Michael Cohen and Robert De Niro's Robert Mueller, the It's A Wonderful Life sketch's biggest surprise was seeing Matt Damon resurrect his impression of Kavanaugh. Damon brought out all the jokes that had been introduced during his first appearance in the role — Brett Kavanaugh likes beer, he loves hanging out with his friends like PJ and Squee, and he gives Donald Trump the greatest gift of all — a calendar. He also seems a lot happier not being on the Supreme Court, as his spot instead went to Merrick Garland.

Unfortunately, as one could guess, the lesson that the world is better without Trump in the White House is lost on Trump, who proudly returns to his position with a new lease on life. As Kellyanne Conway says, every time a bell rings someone from Trump's White House either leaves or is fired. While this likely won't be the last that SNL sees of Brett Kavanaugh, what with the fact that Supreme Court appointments last for a lifetime, it was a fitting conclusion to a tumultuous year for SNL's political sketches.