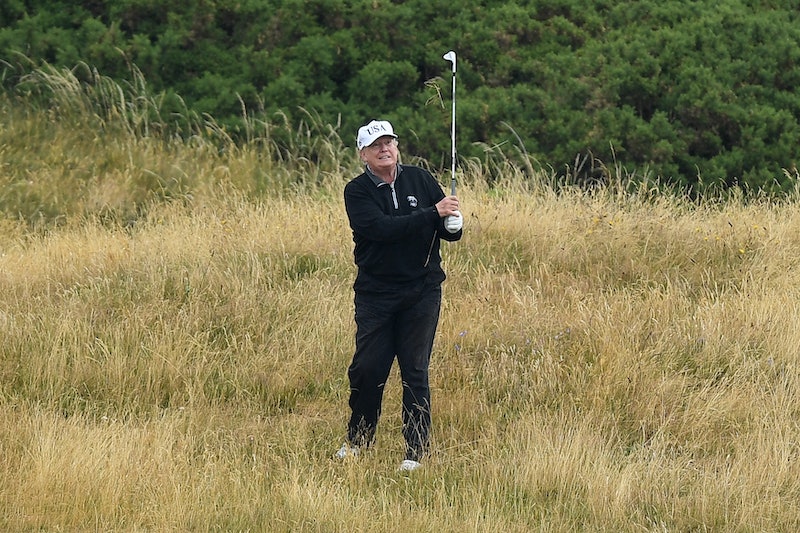 The comment was the first time President Trump has acknowledged the report since the United Nations' Intergovernmental Panel on Climate Change (IPCC) released the grim warning about the likely state of the planet if greenhouse gas emissions are not reduced in the next decade. The report describes increasingly severe food shortages and wildfires as well as widespread coral reef deaths if nothing is done about the current emissions levels. As Huffington Post reported, 91 researchers and editors from 40 countries citing more than 6,000 scientific references concluded that world leaders need to work together to drastically cut emissions by 2030 or suffer the detrimental effects on food and environment.

Scientists warned that should global warming rise only 2.7 degrees Fahrenheit above pre-industrial levels, people around the planet could start to see the disastrous impacts predicted in the report.

Prior to Trump’s comments on Tuesday, the White House’s official response to the UN report was to compare the level of the United States' carbon dioxide-related emissions to the rest of the world.

“From 2005 to 2017, U.S. CO2-related emissions declined by 14 percent while global energy-related CO2 emissions rose by 21 percent during the same time,” White House spokeswoman Lindsay Walter said, according to The Hill. “This has been possible through the development and large-scale deployment of new, affordable, and cleaner technologies to capitalize on our energy abundance.”

Trump has stated in the past that he does not believe in climate change and that he believes it is a Chinese hoax, though The Hill reported that he has admitted that pollution caused by man does have a hand in global warming. An overwhelming majority of the scientific community — 97 percent, according to NASA — believe that climate-warming trends over the 100 years are "extremely likely due to human activities."

But making these changes in the next 10 years is likely to be next to impossible because of politics, the New York Times reported. The report says that it would require governments to put a hefty tax on carbon dioxide emissions, something that would likely never happen because of America's partisan divide. The United States is the planet's second-heaviest greenhouse gas emitter, the Times noted, with China polluting the most.

Given Trump's numerous attacks on climate change, this UN report might not sway him. But his support will be crucial if world leaders are to work together in preventing the catastrophe painted in the report.

More like this
Prince William Condemns “Unacceptable” Comments Made To A Black Guest At Buckingham Palace
By Shahed Ezaydi
The David Beckham Qatar Controversy, Explained
By Sophie McEvoy
Footballer Jake Daniels Shared His Thoughts On A World Cup Boycott
By Sam Ramsden
Iran Has Issued A Death Sentence Over Mahsa Amini Protests
By Catharina Cheung, Darshita Goyal and Maxine Harrison
Get Even More From Bustle — Sign Up For The Newsletter